There is no doubt that Lesotho is beautiful. Most people live in the lowlands of this kingdom surrounded by South Africa. But the rest of the country rises into the often snowy Maloti Mountains. 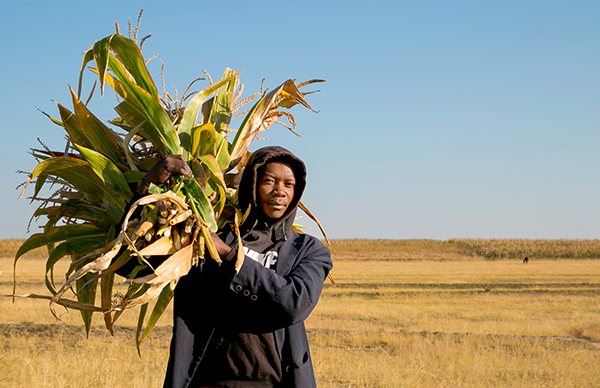 A herder in Lesotho tops his maize, removing the upper growth with no cobs, to help improve growth and provide fodder for his livestock. Photo by Nancy McNally/CRS

The starkness of their spectacular beauty is revealing. It tells a story of environmental degradation that leads to poverty and forces people to migrate. In most of Lesotho, all that can be seen on the mountainsides are winding narrow roads leading to solitary outposts for boys who herd sheep and other livestock, and live rough in isolated thatched huts for months at a time to protect the animals.

To the foreigner, Lesotho is idyllic. To the locals, it was once beautiful, but no longer really is.

“Our mountains are bare,” says Motsoteng Mothunyane, Catholic Relief Services’ technical officer for agriculture in Lesotho. An expert in soil science, Motsoteng has worked for CRS in Lesotho for more than 13 years. “If you talk to the older people in the countryside, they’ll tell you these mountains used to be green—covered in forests.”

Nothing green was visible from Motsoteng’s car as he drove alongside the Senqu River, which descends into South Africa to become the Orange River, traveling more than 1,300 miles to the Atlantic from its source in Lesotho. The mountains rising above the river appear almost perfectly smooth. They’re golden brown or gray, but not green—even when it rains.

Motsoteng blames overgrazing by sheep, goats and cattle, exacerbated by corruption that has allowed owners of large herds to evade government regulations on grazing. 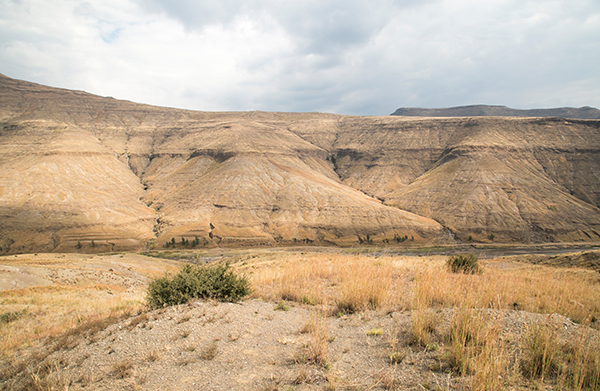 The result? Lesotho loses 2% of its soil to erosion with each passing year. It’s visible if you know what to look for: At the bottom of every mountain is a riverbed filled with silt, rocks and sand. With no plants, the mountaintops are loose dust, rocks and gravel, and there is nothing to hold it all in place. The topsoil is gone, and the rest eventually tumbles down to the riverbeds. In some places, there’s no vegetation at all.

Without vegetation, nothing absorbs the water, so it travels down the mountain in torrents.

“When we were kids, our elders told us there was water on these mountains, that there was water everywhere, and the hillsides were full of grass for the animals,” says Mohlomi Tsoeu, who is 61. “But we’d never seen water here in our time.”

Mohlomi wants to do something about this. He is vice chairman of the water committee in Ha Makunyapane, a village in eastern Lesotho, which is home to some of the country’s highest peaks.

Three villages, including his, on hillsides that surround one of the mountains, came together to build bunds, or stone-walled terraces, that start from the top of the mountain and slowly move downward. Between each ridge, different types of fodder grasses were planted to feed livestock, prevent erosion and retain water. The result: tall golden grasses ripple across the mountain once again.

And, eureka—the water returned. At various points along the hillsides, the water bubbles up and trickles down the mountain, emerging from where there hadn’t been a drop in three generations. At the bottom of the mountain, peach orchards flourish along one of the streams running downhill.

The change was evident even during the El Nino-triggered drought of 2015 and 2016 when Lesotho was one of the hardest-hit countries. Its already meager harvests—less than 10% of Lesotho’s land is arable—led to a national emergency.

“At the peak of the El Nino, when thousands of animals were dying, we opened up this place even before it was fully ready, so that people could graze their animals here,” says Motsoteng. “People here had water when no one else did. People had their home gardens and they were able to endure. This was an amazing place amid so much drought and devastation.” 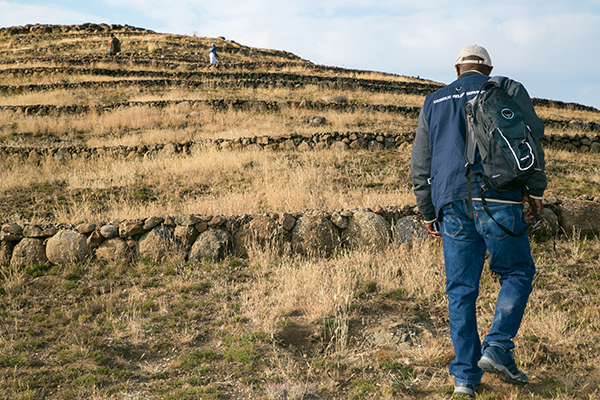 CRS’ Motsoteng Mothunyane walks up a mountainside terraced and planted with grasses by the local villagers. Photo by Nancy McNally/CRS

By contrast, locals point to a village across the valley on another mountainside. There, they say, some people died from hunger.

Through REAL, villagers are involved in the tedious work of weeding the mountain, because not all vegetation is beneficial for the livestock: In fact, much greenery is inedible. So the villagers uproot harmful or invasive plant species, using the knowledge and training they’ve gained through CRS and our partnership with the Lesotho Ministry of Forestry and Land Reclamation.

“We learned to start at the top of the mountain to capture the water,” says Masebotsa Pitso, deputy secretary of the water management committee. “You keep the water from running down the mountain, slowing it and slowly absorbing it into the earth.”

In this area, volunteers carried out the work, understanding how it benefits their communities. In other areas, villagers are paid for the work.

As Lesotho  emerges from one of the worst droughts in 20 years, the REAL project demonstrates that careful management of the country’s precious natural resources can help it realize the full potential of the livestock industry, especially in high-end products such as mohair and fine wools, for example.

Conserving and preserving the mountain ecosystems—the main natural resource—to sustain people and animals will be key to harnessing that economic potential to benefit all of Lesotho’s people.

August recess is a key moment to meet with your members of Congress while they are out of session... END_OF_DOCUMENT_TOKEN_TO_BE_REPLACED

Use this calendar for key dates to reflect and take action with your community to address climate... END_OF_DOCUMENT_TOKEN_TO_BE_REPLACED