In response to the ongoing socio-political crisis in Togo, CRS is accompanying religious leaders in their search to bring communities together in peace.

“Violence only brings violence,” said Marzouk Ouro-Bana, “but, I think collaboration [for peace] is the better option.” A Koranic teacher, Ouro-Bana participated in a series of social cohesion trainings in Sokodé in March 2018. 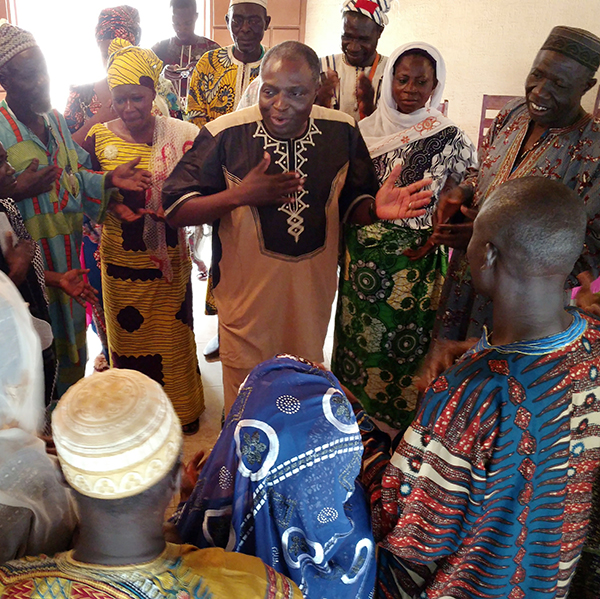 In August of the previous year, the centrally-located city was a hot spot in the country’s socio-political crisis, as opposition groups carried out large-scale marches demanding reforms. As tensions escalated, violence erupted in the city, leading to the deaths of two soldiers and two civilians in October 2017.

“The violence was strong,” recalled Halawe Ouro-Bossi, a traditional religious leader and a resident of Sokodé. “When I needed to go to Sokodé, I was scared. Everyone was scared.”

With technical and financial support from CRS, the Sokodé Catholic diocese and the Episcopal Counsel for Justice and Peace (CEJP) conducted a series of social cohesion workshops with 115 religious leaders, including women and young adults.  At stake was the critical need to overcome mistrust and violence and replace them with trust and solidarity.

Applying CRS’ 3B/4D approach for social cohesion, which combines 3Bs (binding, bonding and bridging) with the four pillars of the Appreciative Inquiry (discover, dream, design and deliver), Catholic, Protestant, Muslim, and Traditional religious leaders prepared themselves to be mediators.  Their purpose was to build a more peaceful, inclusive and just community for all. The workshops began with individual reflection and introspection (binding) followed by bonding to strengthen intra-group relationships, and culminated in an interfaith workshop (bridging). The interfaith workshop brought together participants from all four religious groups to create a shared vision for the future of their city.

“This was truly the first time that I have sat down with other religions to sincerely discuss our environment. I never could have imagined this before,” said Protestant Pastor Djidome Yandja, of the Assembly of God. During each training, each religious group formed its vision for the future of Sokodé, he said. Although each religion is different, Pastor Yandja said, they all seem to share the same desire for peace and prosperity.

With team-building exercises, dialogue, and debate, participants agreed on the following vision: 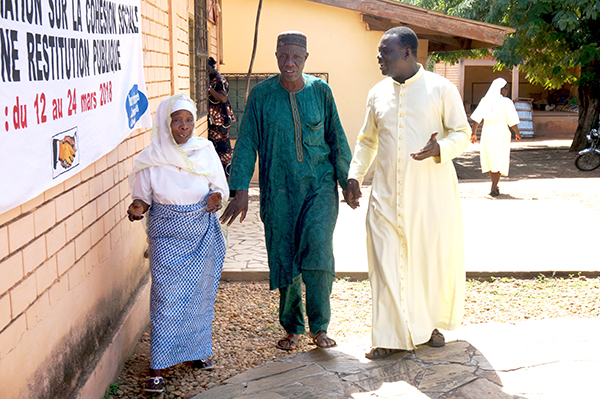 Social cohesion workshops included 115 leaders, women, and youth from Catholic, Muslim, Protestant, and Traditional religions to create a shared, positive vision for Sokodé locality in the wake of violence. Photo by Erin Lewis/CRS

"Transformed, beautiful, wonderful and reconciled, Sokodé, like a paradise, peace, love, fraternity, harmony, fairness, legality, wisdom, friendliness and prosperity reign; Free, her population collaborates and works in solidarity without any form of discrimination and with the recognition of the rights and duties of each and every person for national unity, the well-being of all and the sustainable development."

Though progress has been made through these workshops, tensions remain high due to a strong military presence and an ongoing ban of public marches in the city. Leaders say there is still fear that violence could easily return to the city. In order to achieve a lasting peace, the participants have chosen to collaborate and use their influence to help their neighbors heal and build a stronger, more supportive community. Now participants are looking to local political leaders to help them achieve their shared vision. They have received the strong support of the préfet, the head of the local administration, who personally attended the opening and closing ceremonies of the workshop series.

“If [political leaders] could have the same training, it would greatly help our cause, because then we could work together,” said Pastor Yandja. “Our vision is not just a dream, but I am convinced that it is a reality we can achieve within the next 10 years.”

In the meantime, some participants have taken on the role of a mediator in their community.

“I have spoken to my peers about the importance of social cohesion so that what happened in Sokodé does not happen again,” says Ouro-Bana. Although he has encountered skepticism and even retaliation from his peers, he insists that peace and collaboration are more effective than violence.

A prayer asking God to help us recognize family in each of His children, to know them as brothers... END_OF_DOCUMENT_TOKEN_TO_BE_REPLACED