We don’t have much. This was a challenge for us. 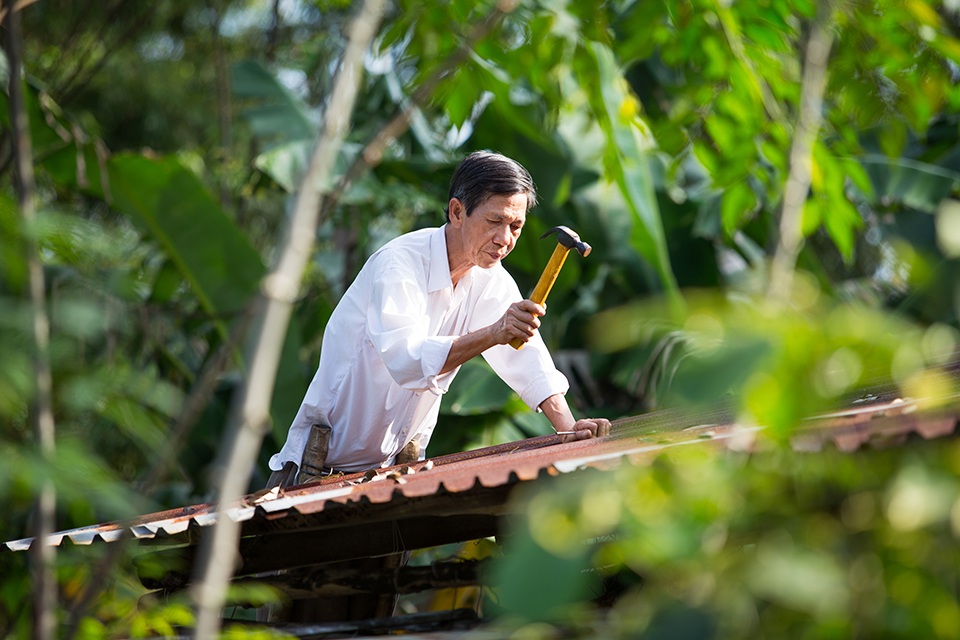 After Typhoon Damrey, Cao Xuan Hoa uses tools from a shelter kit he received from Catholic Relief Services to replace his roof. Photo by Lisa Murray for CRS

“The storm had taken it,” says Hoa. He and his wife Nguyen Thi Phuong, had left an emergency shelter to begin counting the cost of the typhoon soon after it hit coastal Quang Nam and 14 other provinces on November 4, 2017. With 80 mph winds and heavy rainfall, Typhoon Damrey left 107 dead.

Although Hoa and Phuong had survived, the roof was a dramatic loss.

“We don’t have much. This was a challenge for us,” says Hoa.

He and his wife live on the money she makes selling soup in a local market and his monthly $20 disability benefit. Hoa, 62, had to close his bicycle repair business following multiple operations stemming from Vietnam War injuries, including the loss of a kidney. 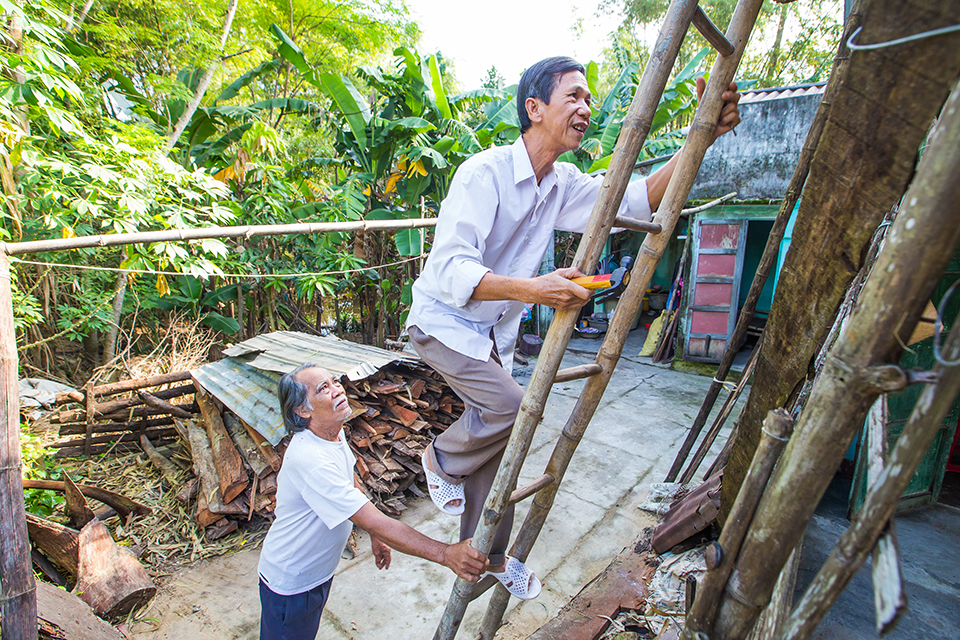 With a neighbor’s help, Hoa climbs up to replace his roof, left, torn away by Typhoon Damrey. Photo by Lisa Murray for CRS

Understanding the critical importance of timely intervention in the wake of natural disasters such as Typhoon Damrey, CRS developed our response within 24 hours, based on results of a rapid needs assessment.

With half of the residents in project districts suffering livelihood and income losses, and many living in temporary shelters, CRS worked with local authorities to deliver 300 shelter kits, 4,555 hygiene kits and 2,767 cash transfers to meet the needs of 7,622 households, or 25,277 people.

CRS, as a trusted development partner in Vietnam with a history of working in the province since 2005, was positioned to the needs of affected people  immediately after the storm hit. 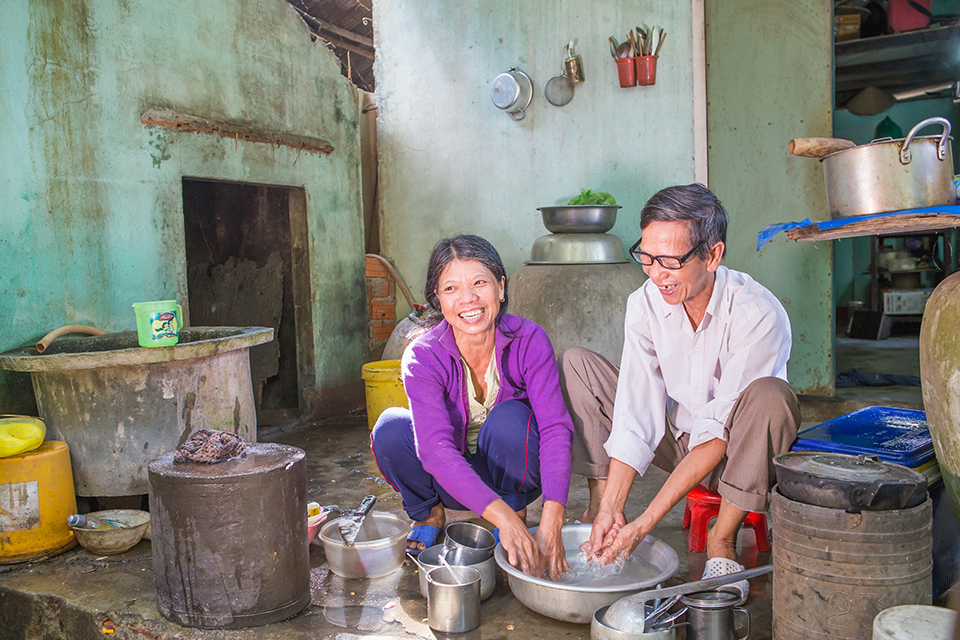 Hoa and Phuong begin their daily routine washing vegetables for soup she sells at the local market. Photo by Lisa Murray for CRS

The shelter kit includes tools that replaced some of those Hoa lost in the flooding. With community support, the couple added a new roof and constructed a pigpen using bamboo and other local materials.

“We are very grateful for the kit and community support. We will be safer when new storms come,” says Hoa. And he encourages other villagers to use the guidelines to make their homes more resilient. 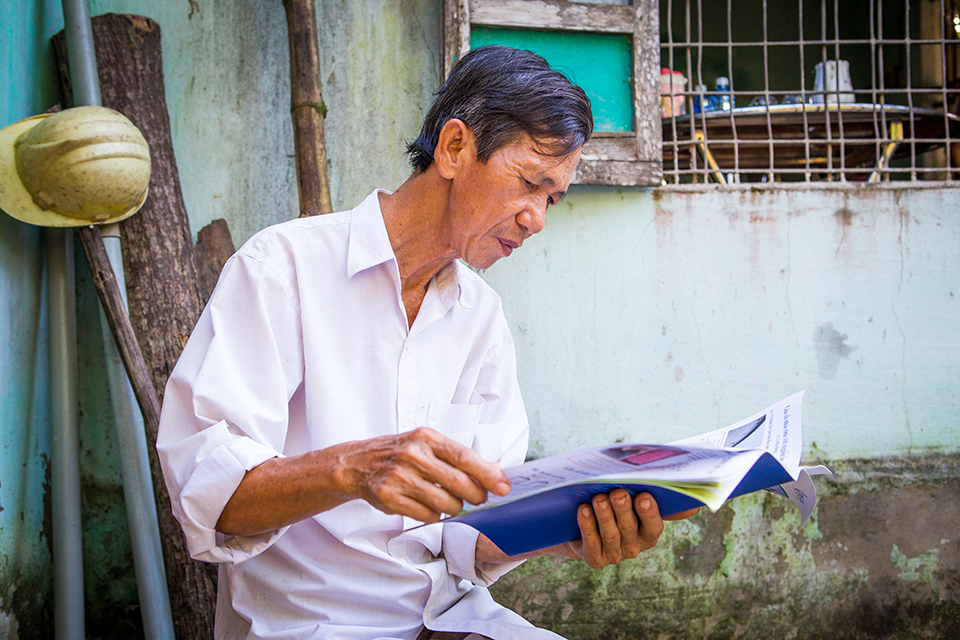 With its long coastline and a population that relies predominately on farming, Vietnam is among the countries most vulnerable to climate change. CRS has worked with local leaders and community members in central coastal and southern Mekong Delta communities since 2012 as part of a disaster risk reduction project.

The project builds on CRS’ regional and global expertise in community-based disaster preparedness to mitigate risks from increasingly severe and regular natural disasters like Typhoon Damrey.

For villages like Hoa’s, this means not only identifying and addressing local risks, but also establishing early warning systems and evacuation plans, building disaster-resilient housing and diversifying livelihoods.

By building families’ capacities to better prepare and respond to natural disasters, CRS is protecting lives, and helping safeguard people’s savings and other assets, so they can recover from disaster.

“Our task force has been very helpful. Now we have a better idea [of how to respond] when a storm comes, and stay safe,” says Hoa.

Read the latest update from CRS country programs and partners around the world as they respond to... END_OF_DOCUMENT_TOKEN_TO_BE_REPLACED

Read the latest two-page summary from CRS country programs and partners around the world as they... END_OF_DOCUMENT_TOKEN_TO_BE_REPLACED