Reducing Damage from Disasters in Vietnam

Thien Thi Phan faces longer workdays than most, as she tries to pay for her daughter’s university education. 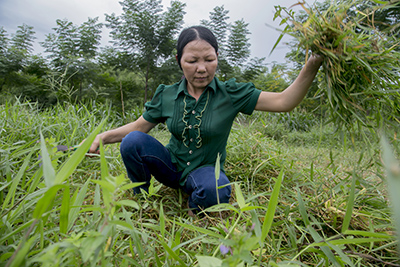 Thien Thi Phan cuts fodder for her family’s cows. Each day, she juggles multiple tasks to earn an income for her family. Photo by Jennifer Hardy/CRS

She wakes at 3 a.m. in Dong Lanh, a village in central Vietnam, and begins her day making rice wrappers for spring rolls. After spreading them to dry, she follows a routine shared by other mothers in her village: cooking, working eight hours in her rice field, cutting grass to feed her cows, washing laundry. She must also find time to sell the day’s rice wrappers.

Finally, at 11 p.m., she wills herself to sleep as soundly as possible for 4 hours before waking to start her routine all over again.

Thien works 100 or more hours every week to supplement the income her husband earns from piecemeal jobs as a mechanic. As their safety net, Thien and her husband have the rice they store in their home after harvest, the cooking tools they repair and the two cows they are raising to sell.

Losing any of these assets could erase the progress Thien has made working Wall Street hours in a Vietnamese village. 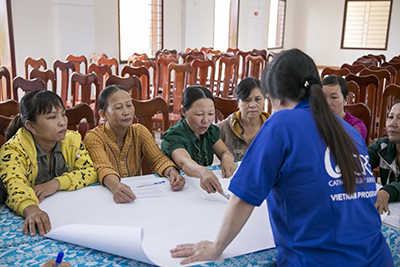 Thien Thi Phan, a farmer from central Vietnam, leads a community discussion about clean water at a CRS training. After the training, Thien will share the information she learned with neighbors who couldn’t attend. Photo by Jennifer Hardy/CRS
“In 2007, we lost our entire harvest to floods, 1 ton of rice,” says Thien. “Very poor families had to borrow money to buy rice.” The expense sent them into a spiral of borrowing and debt.

Catholic Relief Services is helping Thien and other families in Dong Lanh prepare for flooding, which happens more frequently now than when Thien was young.

Just under 20,000 houses in Quang Nam province, which includes Thien’s village, were damaged or destroyed by floods and typhoons from 1997 to 2005, according to the government of Vietnam’s Central Committee for Flood and Storm Control. From 2006 to 2013, that number increased more than five times.

Storms have become stronger and more frequent due to changing climate and weather patterns. Thien cannot change this, but together with CRS she is helping her family and neighbors learn to mitigate the effects.

“Before, we didn’t have good forecasts, but now we can get early warnings from TV or radio, so we have more days to prepare for a flood,” Thien says. 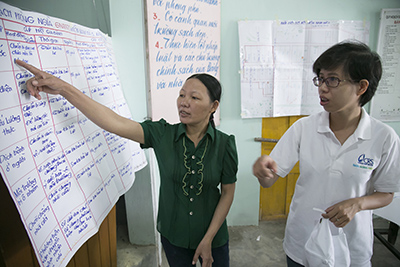 Thien leads meetings where community members map out evacuation routes and safe spaces to retreat in the event of a sudden disaster. She and her neighbors have either elevated their animals’ living spaces or learned where they can take cows and pigs when floods occur. And Thien built platforms for her rice, which she stores in plastic bags. Now, when her home floods each season, her valuable grain stays dry.

CRS is also helping farmers grow new rice varieties. Rains are beginning weeks earlier than historical averages, and there has not been enough time for rice to mature for harvest before heavy floods destroy the crop. With a faster-growing variety, yields may be slightly less but farmers can harvest and store their crop before it is destroyed.

With better resilience to disaster, Thien’s 20-hour workdays will not go to waste. This means that when she has finished paying her daughter’s tuition, she will not have to switch to paying off debts incurred from losing food and animals in a flood.

“My community work is a huge part of my life,” Thien says of the time she spends on the CRS project on top of her already grueling schedule. “I take part in every activity, and I make time to talk to my neighbors every day because it brings me happiness.

“I had wanted to be a teacher but had no access to higher education. Now community work is my passion and interest. If I could spend even more time doing it, I would.”

Read the latest update from CRS country programs and partners around the world as they respond to... END_OF_DOCUMENT_TOKEN_TO_BE_REPLACED

Read the latest two-page summary from CRS country programs and partners around the world as they... END_OF_DOCUMENT_TOKEN_TO_BE_REPLACED