Hope and progress can come in the oddest packages. For Timothy Machika, they came in the form of a fiery red bird's eye chili pepper.

The Malawian day laborer had been struggling. It was hard to feed his wife and five children with the periodic work he managed to scrape together and the small amounts of corn and tomatoes he could coax from his 1 acre of land. 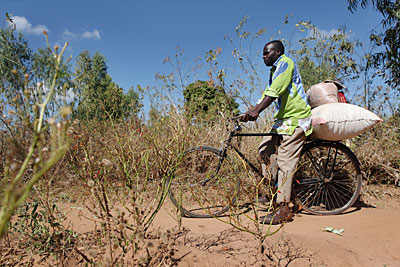 Chili farmer Timothy Machika rides to a monthly buyers market in Malawi on a bike laden with chili peppers and ledger books. Photo by Sara A. Fajardo/CRS
Their lives were like a set of carefully lined-up dominoes precariously teetering and threatening to fall. When drought hit, as it often does in Malawi, it would leave Timothy and his wife, Eunice, wondering how they'd stretch their meager harvest of corn into the last months of the year. "On a good day, we ate more than one meal," says Timothy. "The children each owned one pair of shorts and no other changes of clothes."

The family staved off bitterly cold evenings by lighting campfires and cuddling for warmth. They had no blankets in the house. Timothy's lean body was gaunt and tired. His health was failing.

Timothy, though, had big dreams. He didn't want a life that relied completely on finding the next day's wages. "I knew I wanted to open a small kiosk and sell goods like aspirin and [petroleum jelly] to moisturize cracked skin," says Timothy. He also wanted to diversify, perhaps rent another plot of cropland or buy some livestock.

"I had the business ideas," he says. "What I didn't have was the money to make them happen."

Then along came the chili pepper.

Local lore had it that the fiery plant causes leprosy or infertility. Many feared growing peppers. Why risk it when one could easily grow corn or another crop that wouldn't plague them with disease?

Timothy, however, recognized that, to succeed, a person has to take risks. He planted an acre of chilies and, with guidance through the Catholic Relief Services Wellness and Agriculture for Life Advancement, or WALA, program, Timothy worked with other farmers to form the Tilimbeke marketing group.

WALA, a CRS-led initiative, comprises eight organizations and is funded generously by the American people through the U.S. Agency for International Development. In addition to training farmers and providing them with tools, the program has taught them an invaluable lesson: They have strength in numbers. 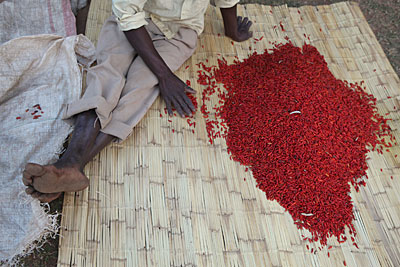 At market, Malawian farmer Timothy Machika sorts his chili by grade before presenting them for sale. Chilies that are the brightest red yield the highest prices. Photo by Sara A. Fajardo/CRS
The family is busy preparing for the monthly market day. Bright red chilies covering a white sheet catch the midday glare as they dry in the sun outside Timothy's modest adobe home. A short distance away on a raised bamboo platform, Eunice and Timothy's sister-in-law Chumanira Mpawa quickly pick through dried peppers and sort them into categories.

The bright red ones cascade one by one on to a frayed plastic sheet. Of the highest quality, these grade A chilis will fetch the highest price. The family separates the yellowish ones, grade B, into a purple dish and the mottled orange ones, grade C, into a blue one. They push the damaged ones, grade D, to the side.

Throughout the region of Zomba, farming families like Timothy's do the same. They know they'll earn more money by presorting their peppers. They also know the minimum amount they'll earn because, months before, they set the price as a group. Together, the farmers have much more leverage to negotiate directly with buyers. They also have access to wholesale prices: They may pay as little as one-tenth the retail cost for items like fertilizer.

Customers also benefit by being able to work directly with the group to communicate their needs, such as how they want their peppers graded. And they save time and money, no longer having to drive from place to place to purchase from individual farmers.

"We are able to make more profits since we're buying quality crops," says Horace Mbingwani, a buyer for the Malawian company ExAgris Africa Limited. "Because farmers know what we're looking for, it makes it easier for us." 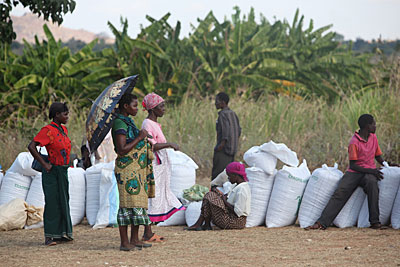 Chili farmers wait to sell their peppers at a monthly buyers market in Malawi. Photo by Sara A. Fajardo/CRS
Along with two sacks of Grade A and B chilies totaling more than 50 pounds, Timothy straps a ledger, a calculator and a scale on to the back of his black bicycle. It's a 4-mile ride over dirt roads and past red chili pepper fields to the market site on the Mwanje Primary School soccer field.

The field is teaming with farmers. A long line of white sacks bursting with peppers has already formed by the time Timothy arrives. What started as 98 pioneer chili farmers who formed Tilimbeke a year ago has now more than doubled to 218. On the first market day, farmers sold a little more than 1,000 pounds of chilies bound for markets in Spain and the United Kingdom. By day 2, they had sold just shy of 4,000 pounds.

Timothy takes his place under the goalpost alongside the buyers. He pulls out the ledger, hangs the scale and places the calculator on a table set up to receive the farmers. As the treasurer of the farmers' group, Timothy plays a pivotal role in helping to ensure transparency and the prices paid for their goods.

Numbers are rattled off as each farmer takes a turn up at the scales: "21 kilos, grade A," "15 kilos, grade B." Timothy and the farmers take notes. Fingers tap on plastic-covered calculators as both buyers and farmers cross-reference one another's calculations. Timothy carefully records each sale into the ledger; the buyer and the group's chairperson and secretary also note the sale in their ledgers. Tilimbeke members were taught this system of cross-checking to avoid corruption and assure that everyone receives the same rates for the same product.

On this market day, Timothy pocketed the equivalent of $55 from his chilies, far more than he was able to earn as a day laborer. His ride home is easier without the extra weight.

Before pulling into the long stretch of road leading to his house, Timothy passes the almost completed adobe kiosk he'll be opening next month. Thanks to the WALA initiative, Timothy now has the money he needs to make his business plans a reality.

Timothy has his goats, he has his store and he has rented 3 more acres for next year's chili harvest. But, most important, he can finally give his family the small comforts he couldn't provide on his day laborer wages: four changes of clothes, three meals a day and blankets for every one of his five children.

We seek daily renewal from the source of all life, and so we pray ... END_OF_DOCUMENT_TOKEN_TO_BE_REPLACED

Our walk with God is reflected in our walk with others, and so we pray ... END_OF_DOCUMENT_TOKEN_TO_BE_REPLACED