Hundreds of thousands fled fighting in Sri Lanka during a bloody 25-year civil war. Among them was Dhanalaxshmi Selvarasa, who hoped she was also leaving behind the violence in her home life. 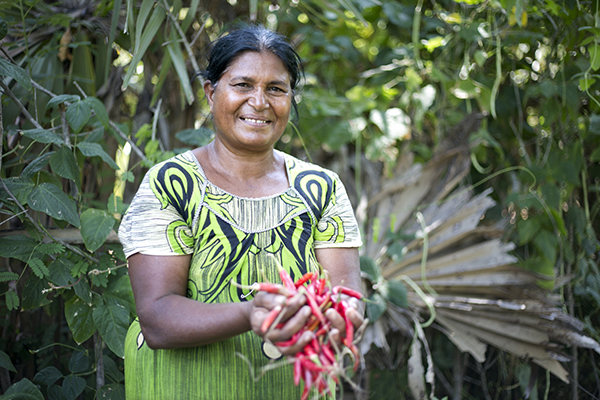 “When we went to the camps in India in July 1996, I thought our family problems might be better because we were in a new place,” says Dhanalaxshmi, now 58. By problems, she means domestic abuse that began shortly after she married in 1990 and continued through the births of three children.

But it turned out that the move did not help. In fact, she says, things got worse.

Eventually she received counseling from Catholic Relief Services in a refugee camp. And now, with support from the U.S. State Department’s Bureau of Population, Refugees and Migration, CRS and our partner ZOA are working with Dhanalaxshmi—who returned to Sri Lanka in 2012—to build a more secure life.

When Dhanalaxshmi first arrived at the refugee camp, her husband forced her to join the many Sri Lankans who migrate every year to work in Saudi Arabia.

“I was so afraid to leave my small children, but it was more dangerous for them if I stayed,” she says. “I worried for them every day. I hated being away from my children, and it was a bad place to work.” 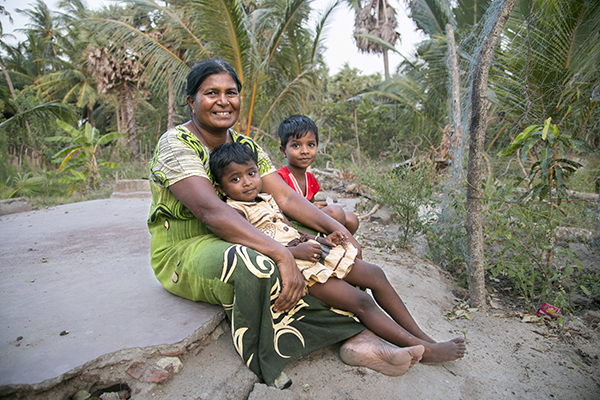 After years of separation, Dhanalakshmi enjoys being with her children and granddaughters Thuvetha, 7, and Dhanushika, 3. Photo by Jennifer Hardy/CRS

She sent her earnings home—not to her husband, but to her mother, who was living in the same camp—with hope that the money would help support her children. But that never happened.

“When I arrived, I was shocked at my daughters’ poor condition,” she says. “My husband had forced my mother to give him all the money I sent, and nothing reached the children. He would tell my mother that if she didn’t give the money, he would harm the children. She had no choice.”

Dhanalaxshmi got a divorce in 2004, but her husband refused to let her see the children. Instead, he returned to Sri Lanka with them. “I stayed at the camp in India, hoping for the time when I could see them again,” she says.

By the time she returned to Sri Lanka in 2012, her children were adults, and the family was reunited. Yet it was still difficult for her to come home after so many years and so much trauma, especially since her home by then was a plot of overgrown land. Only crumbled ruins of her house remained.

“When I landed in Sri Lanka, I had many questions about how I would support myself and how life would be, but I knew I had to be a support for my three children and help them have a good future, now that my husband could not prevent me from seeing them.” 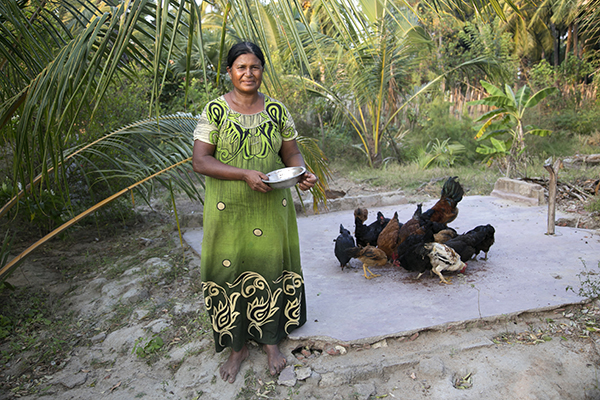 CRS and our partners provided chickens that produce eggs for food and income. Photo by Jennifer Hardy/CRS

CRS and ZOA helped Dhanalaxshmi create a large kitchen garden where she grows vegetables for meals and to sell. She also received chickens and help with an irrigation system. In the future, she will receive two goats to add to those she purchased with her savings. With the garden and the chickens, she and her family have more—and more healthful—food, as well as income.

“I feel real freedom in Sri Lanka in caring for myself and having free movement,” she says.

Jomey Joseph, head of CRS’ office in Chennai, India, manages programs for Sri Lankan refugees in India and returning families in Sri Lanka. “We want to support people in their choices and help with a safety net that can give them a real option to return if they decide that’s what’s best for them,” Joseph says.

Dhanalaxshmi’s family still faces challenges. For example, she worries about how her son will support himself beyond the small profit he can make growing rice. Also, a crocodile recently ate one of her goats. But she’s faced bigger threats—and so far, she’s conquered them all.

Read the latest update from CRS country programs and partners around the world as they respond to... END_OF_DOCUMENT_TOKEN_TO_BE_REPLACED

Read the latest two-page summary from CRS country programs and partners around the world as they... END_OF_DOCUMENT_TOKEN_TO_BE_REPLACED