Rebuilding Schools and Futures in Iraq

Al-Salam Secondary School for Boys, located in the historically Christian Assyrian town of Bartella, Iraq, is one of the few secondary schools open to students after the town was liberated from ISIS in October 2016. Mohammad*, a 16-year-old student at the school, suffered significant setbacks to his education because of the violence. 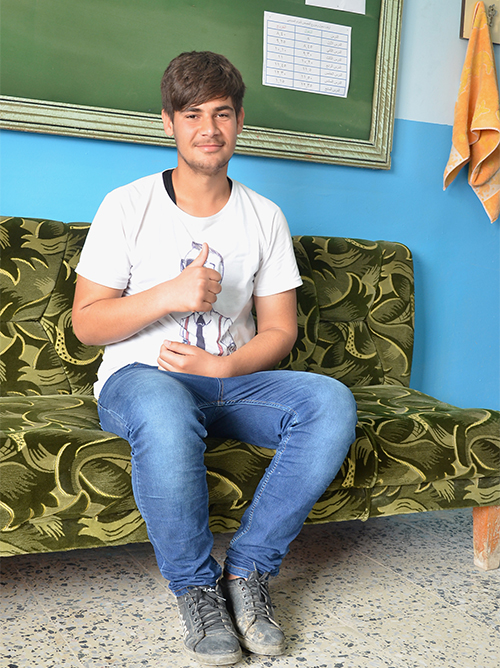 Mohammad* sits in his school, Al-Salam Secondary School, in Bartella, Iraq. He and his family returned to Bartella in October 2017 after its liberation from ISIS and found overwhelming destruction. Photo by CRS staff

In August 2014, when Mohammad was 11 years old and happily attending primary school, ISIS took full control over nearby Mosul. Within days, the entire village of Bartella, including Mohammad and his family, fled to escape the impending invasion and occupation of their own town. Mohammad remembers the eerie calm of the day.

Mohammad and his family traveled to Erbil, the capital of the Kurdistan region of Iraq, with only enough items for a one-day trip, thinking they would return to Bartella soon. “We were very afraid that someone would stop us on the way to Erbil,” he says.

Once they arrived in Erbil, it quickly became apparent that their short trip would turn into an indefinite displacement. Mohammad worried about going to school and whether he could study in Arabic or would need to learn Kurdish, the predominant language in Erbil. Although Mohammad’s family found an Arabic language school for him, he struggled to focus in class. He missed his friends, now spread out across Iraq. He began to despair about whether he would ever be able to go home again.

When Mohammad and his family finally returned to Bartella after its liberation in October 2017, they found overwhelming destruction. ISIS had looted and burned most of the homes, schools, mosques and churches. Many of the remaining structures were damaged during military operations. Al-Salam Secondary School was heavily damaged, with windows and doors blown out completely. Any educational materials that had been left behind were stolen or burned. Mohammad and the other students attended classes in the cold and sat on the floor, since there were no heaters, windows or desks. The school even lacked bathrooms and clean water. 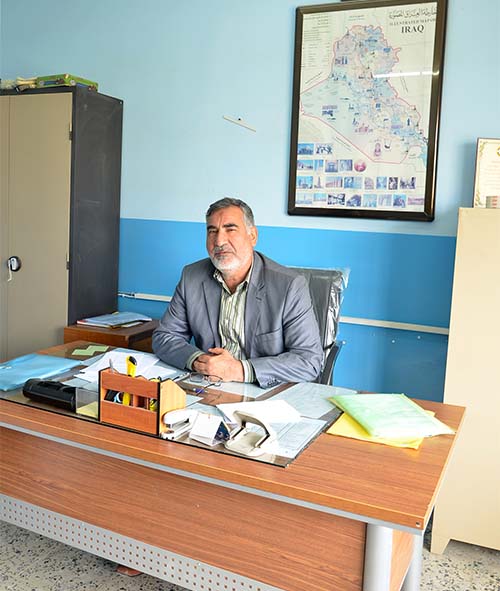 Mr. Abbas* sits at his desk at Al-Salam Secondary School in Bartella, Iraq, where he is head teacher. CRS helped rehabilitate the school for the 2018-2019 school year. Photo by CRS staff

“It was so dirty and difficult to pay attention because of the cold,” he says.

“If there were no services like this at the school, not one of us would attend,” Mohammad says. He and his classmates would have no chance of being properly prepared for national exams, and risk not graduating from high school. Instead, Mohammad is now preparing for a future that includes completing high school and possibly attending a university.

Mr. Abbas*, the head teacher at Al-Salam School, says the school is now the focal point of life in the community. He emphasizes that the school’s continued success encourages people to stay in Bartella and rebuild.

“Schools are our hope,” Abbas says.  “Where there is a school, there is life.”

Read the latest update from CRS country programs and partners around the world as they respond to... END_OF_DOCUMENT_TOKEN_TO_BE_REPLACED

Read the latest two-page summary from CRS country programs and partners around the world as they... END_OF_DOCUMENT_TOKEN_TO_BE_REPLACED