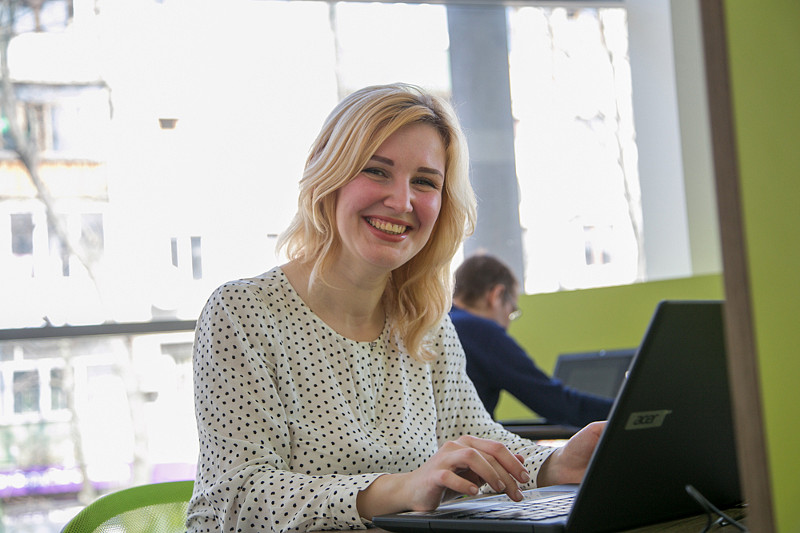 CRS is helping Elina Yefanova, an architect from Donetsk, Ukraine, rebuild her business. She is among some 1.5 million people displaced by civil war in Ukraine. Photo by Valentin Koltakov for CRS

When a shell exploded less than a half-mile from her home in the early summer of 2014, Elina Yefanova knew it was time to leave her home in Donetsk, Ukraine. The architect and mother packed a suitcase and headed to the train station with her two children. They managed to board one of the last trains out of the city before war engulfed the region.

“The shelling was close enough that I realized I could just be going to the store or be near my house and lose my life,” Elina says. “We left, and after a day or two a shell landed on the train station.”

Since the fighting between the Ukrainian government and separatist forces began in 2014, more than 1.5 million people have fled their homes to other parts of the country. Because of the violence, more than 3 million people need humanitarian aid.

After fleeing to Kharkiv, 200 miles to the north, Elina, a single mother, had to find a place for her family to live. As the fighting continued and it became clear that she and her children would not be returning home anytime soon, her next priority was to find a home for her architecture business.

Catholic Relief Services was there to help.

“At the beginning, I was really scared. I worried, ‘What if I can’t do this by myself?’” says Elina, who designed a variety of projects in Donetsk, ranging from cafés to public buildings. “In terms of business, I probably needed a year to get myself prepared to think about work. I found some freelance architecture work, remotely, and that really saved me.”

CRS partnered with Caritas Kharkiv to give displaced entrepreneurs like Elina a boost through a newly opened business hub. In fact, she was enlisted to help design the space’s bright interior. It is equipped with laptops, Internet access, printers, scanners, a meeting room, event space, and a classroom.

The shared area of the hub is an ideal place to rebuild what was lost in the upheaval.

“I have really changed compared to who I was before,” Elina says. “I’ve only just realized that in the last 2 years I’ve done a lot of things that for other people were really difficult—finding a place to live, caring for my children, starting a business.”

Restarting a business and earning a stable income is tough. The entire Ukrainian economy shrank in 2015, and the economy in war-torn Eastern Ukraine was hit particularly hard. Checkpoints at separatist-controlled territories prevent business owners from retrieving assets they left behind. In addition, those who have been displaced must cope with the emotional weight of knowing it will be a long time before they can return home—if ever.“The need to care for family members can limit a person’s energy and time,” says Irina Tulyakova, the Caritas Ukraine project manager who envisioned the business hub and helped make it a reality. “For those who get to the point of restarting their businesses, there are a lot of challenges to overcome. At a minimum, they need to learn a new market, find new suppliers and find new clients.” 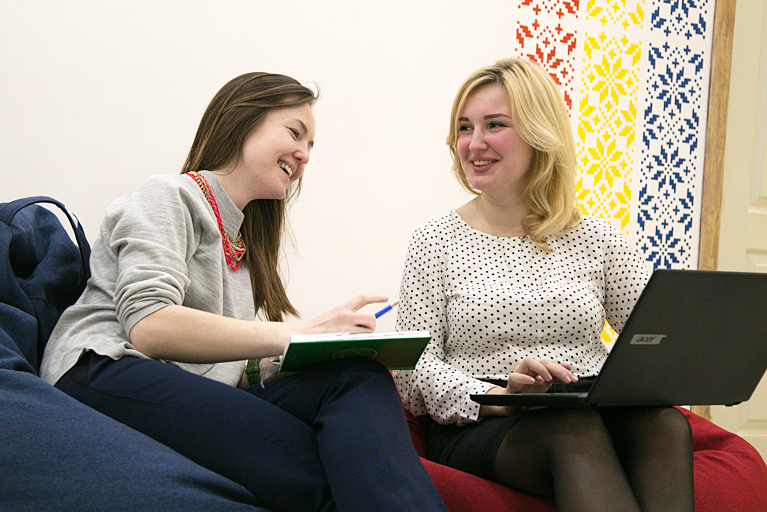 The goal of the business hub is to help entrepreneurs save on rent and office expenses so that they can invest in other aspects of their businesses, build a clientele and plan for the future.

Elina was among 30 entrepreneurs selected—on the basis of a written application and an interview—as the hub’s first users. For 6 months, participants receive free access to the hub’s services, and they participate in an intensive business course. Service-oriented businesses from copy editing to interior design are under development.

“By charging a fee we would be able to earn income for the center, which would make it self-sustaining,” Tulyakova explains.

Since it opened in February 2016, the hub has hosted children’s parties, theater performances, and events for college students.

Staff and residents plan to launch a volunteer group to spread the word about the center. The volunteers will work on projects within the Kharkiv community, promoting the idea of volunteerism.

A place to begin again

“Social co-working is a space that unites people, not just for their businesses as individuals, but for the community and for the country in which they live,” Tulyakova explains. “We see this space as providing a much-needed place within the community for businesses and people to give back to their city.”

The business hub has connected Elina to many people she wouldn’t have met otherwise.

“I see people here with the same goals that I have,” she says. “Our common problem brings us together. We all try to push ourselves toward something, and you’re not running on your own. You can work together and run even faster because you can help each other.”

What’s more, Elina is glad to have a place to begin again.

“I’m at the stage when everything is starting and I would love to see more results, but just being where I am here, that’s a great result,” she says. “I’m starting from zero, and I understand it can’t be like a rocket. I need to go step by step. I need a computer, my head, and the desire to move forward.”

Read the latest update from CRS country programs and partners around the world as they respond to... END_OF_DOCUMENT_TOKEN_TO_BE_REPLACED

Read the latest two-page summary from CRS country programs and partners around the world as they... END_OF_DOCUMENT_TOKEN_TO_BE_REPLACED