Jihan Refuelo pours what looks like a liquid Creamsicle into an orange cup and gives it to her nine-year-old son, Rangit. They sit down next to Jihan's mother, sheltered from the noonday sun by a blue tarp slung between poles. Laid out in front of them is a wooden table set with a pot of Jihan's homemade spaghetti, as well as "lumpia," or vegetable rolls, and "gulaman," the orange drink. Not many buyers yet today. 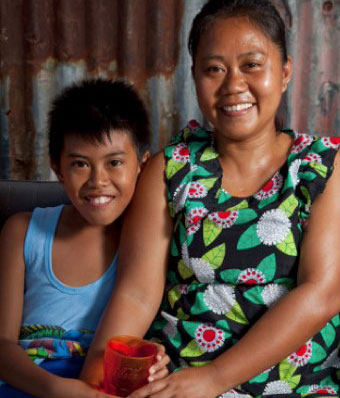 Jihan Refuelo, seated center, sells home-cooked meals from a makeshift stall to try to make ends meet. She lost her home and job in Typhoon Haiyan. Photo by Laura Elizabeth Pohl for CRS

Neighbors and kids lounge under the tarp. Jihan wipes her forehead and tugs at her top, a black tunic with red flowers and green leaves. "The shirt I'm wearing today, this is what I was wearing on the day of Yolanda," she says.

Yolanda. As in Typhoon Yolanda—the local name for Typhoon Haiyan. When it struck in November 2013, killing 6,300 people, it was one of the strongest tropical cyclones ever recorded. Haiyan destroyed or damaged 90 % of the buildings in Tacloban, where Jihan and her family live. The storm also destroyed her home and the seafood company where she worked, leaving her jobless.

Now she cooks lunches in the morning to sell in her makeshift market stall, hoping for a few dollars a day. Millions of people are in similar situations. Now that the storm's debris is cleared, they're trying to rebuild their homes and livelihoods.

"Before, my mother cooked and I worked. Our house was built with good materials. Now our house is built with salvaged materials we saw floating by," she says. "Back then, sometimes I was happy working in the [seafood] company and sometimes not, but my home life was happy."

Jihan remembers everything about her Typhoon Haiyan ordeal: How one of her former employers was worried Jihan's coastal home wasn't safe, but Jihan disagreed. How she bought chicken from a neighbor who died in the storm and ate it for dinner the night before. How she, her mother, her son and three of her friends hunkered down in the house until the howling wind and rising water became too much.

After they evacuated to a nearby two-story house, she saw appliances floating outside, slowly rising to eye level. She managed to get her son, but not her mother, onto the roof before a wave swept Jihan out of the house. At first, she forgot that she knew how to swim, and then she remembered.

Jihan held on to a downed electrical wire, crying uncontrollably when she saw a white blanket float by that looked like the one her son had been holding. She wanted to let go of the wire and sink into the waves, but a neighbor, who was also holding on to a wire, urged her to hold on, saying, "We will survive." Refuelo later found her son and mother on the roof.

"I hugged Rangit and cried," she says.

She is doing everything she can to secure a good future for her son, including a better home. Like thousands of others seeking safe housing, Jihan lives in a no-build zone, where the government forbids reconstruction. 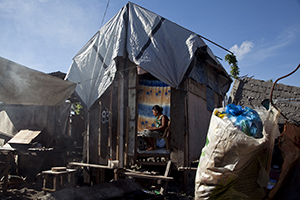 Jihan Refuelo wanted to die when she thought the storm had killed her son, Rangit. Thankfully, her family survived, and she is working to make a better life for them in Tacloban, Philippines. Photo by Laura Elizabeth Pohl for CRS

Catholic Relief Services is helping people like Jihan by offering options, including 2-year subsidies to rent an apartment or land on which to build a home, and 2-year subsidies for host families who take in others who need housing.

Jihan has looked at home sites—suitable for a CRS shelter and latrine—that she could rent for 2 years or lease to own using a subsidy.

Her ultimate goal is stability. "I hope in the future to have my own house and send Rangit to school until he finishes college," she says. "I want my house to be permanent. I don't want to keep moving." If she decides to rebuild with cash assistance and materials from CRS, our engineers will ensure that her new home is sturdy and safe.

Read the latest update from CRS country programs and partners around the world as they respond to... END_OF_DOCUMENT_TOKEN_TO_BE_REPLACED

Read the latest two-page summary from CRS country programs and partners around the world as they... END_OF_DOCUMENT_TOKEN_TO_BE_REPLACED