In Antanimora, Madagascar, you can tell the time of day by listening.

At 7 a.m., the cicadas screech. At 9, the cows begin to moo. At noon, dogs irritated by the heat bark angrily. By dusk, the wind howls as it whips past cacti and dried soil. In Robin Rasamimanana's fields, dawn breaks with the soft squeal of a treadle pump accompanied by Robin's melodious whistle. 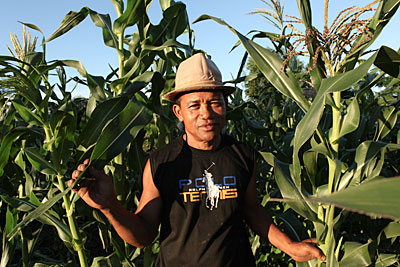 Thanks to drought-resistant seeds and irrigation methods introduced by CRS and our partner in Madagascar, farmer Robin Rasamimanana has a heartier maize crop despite rain shortages. Photo by Sara A. Fajardo/CRS
Robin farms the land that was his father's and his father's father before him. He spent his childhood among orange and mango trees eventually cut down to make way for other crops. When he was 20 and his parents were ill, he took over the farm. Over the years, he could count on the land to provide for him, for his wife, Henriette, and his son Jean Marie—that is, until a string of devastating droughts began to plague Antanimora.

When the most recent drought hit his region in 2007 and pushed farmers to plant near drying riverbeds, Robin was heartbroken. Farmers were forced to water with buckets. Plants withered. Robin had to scale back his crops to only lettuce and tomatoes. Even so, it would take Robin and his family more than 4 hours to water his 5,400 square feet of land by hand. Despite the labor-intensive work, meager harvests yielded scarcely enough food to sustain his family for a few months.

"The shortage in food caused prices to spike," says Robin. "It was hard to make a sale. I much prefer to produce my own food and sell my own goods."

Falling back on odd jobs as a truck driver or a trader proved difficult. Most everyone was looking for jobs, and when Robin did find work, it took him away from his family for long stretches at a time.

When crossing over the Beampingaratra mountain range, the landscape suddenly splits from tropical forested lushness to cacti-riddled dryness. High peaks cause rain clouds to generously irrigate one side of the mountain while depriving the other of much needed water. Instead of the gentle beat of rain against flourishing crops, the people of Antanimora are serenaded by winds whipping through their lands, stripping it of topsoil.

In the Androy region where Antanimora is located, intensive expansion of farmlands has led to severe deforestation. When the droughts began to hit 30 years ago, the land dried up and, without tree coverage to block the tsiokatimo, or "high winds," sand began to blow in and reduce the quality of the topsoil.

The droughts began in 1982 and recurred every 10 years until 2002, when they became increasingly common. Droughts now occur every other year and, often, even annually. Although these new batches of drought do not hit with the same intensity, their frequency makes things worse. On average it takes a region up to 3 years to recover from drought—a difficult task when Antanimora is hit with a shortage of rain every year.

"Before, farmers could stockpile grains," says Félicien Paul Randriamanantenasoa, Catholic Relief Services head of programming. "But now, they can't stockpile and they are getting decreased production every year, which is resulting in a sharp decline in their household income." 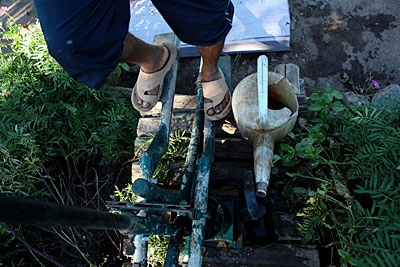 Jean Marie Rasamimanana works a treadle pump to irrigate his family's farm in Madagascar. Photo by Sara A. Fajardo/CRS
"When it comes to drought," Randriamanantenasoa says of farmers, "they have no coping mechanisms. With the loss of productive farmland people are migrating northwards as a labor force to work predominately as pousse-pousse [rickshaw] drivers and security guards."

Forced migration creates another host of problems that are best resolved by addressing the root causes of food shortages in home villages.

As is often the case, simple solutions can make a huge difference in a farmer's yield. Through the generous support of U.S. Agency for International Development and the American people, CRS and our partner Organe de Dévelopment du Diocè de Toamasina have introduced agricultural and irrigation techniques suitable for the expanding swath of arid lands in Madagascar. Robin, with his extensive fields and willingness to work hard, was the perfect candidate to model the improved farming methods to his community.

It began with the installation of a treadle pump that allows farmers to quickly irrigate vast crops. No longer would they need to rely on an inefficient bucket system that sparsely sprinkles water over plants.

CRS then provided drought-resistant seeds and trained farmers to plant peas and sorghum in between cornstalks to maintain soil quality. The Firaisankina (Solidarity) farmer's association, led by Robin, was founded on his land to give farmers the opportunity to try the new techniques, including the treadle. Farmers now take turns tending to the crops they've planted and meet weekly to share experiences on important matters such as insect eradication.

Robin Rasamimanana, left, of Madagascar and his son Jean Marie, behind him, till the soil on land passed down through the generations. Assisting them are Robin's nephew Damy, right, and helper Mananjara, in yellow. Photo by Sara A. Fajardo/CRS
The changes have translated into significant results. The improved seeds and planting techniques yield more crops, and Robin finds he has much more time to plan and expand his fields. Thanks to the treadle pump, he is irrigating more than 16,000 square feet in only 2½ hours. The extra money he's earned from selling the surplus has enabled him to install a second pump so he can further extend his fields.

Each evening, customers stream into Robin's farm clutching raffia baskets in search of freshly cut produce. With the introduction of the pump and improved seeds, Robin has officially become the village's first vegetable producer. Fresh corn and squash used to travel more than 60 miles over cratered roads—often a 3-hour trip—for sale in Antanimora. Thanks to his hearty harvests, Robin can sell produce for half the price of that sold in the local market. Much has changed for Robin and the entire town of Antanimora during the past year.

The workday ends with the sound of Robin shuffling through his fields in search of a perfectly ripe squash to sell to a neighbor. He steps lightly over plants and stops to rearrange squash leaves so that the plant receives more light. He leans on cornstalks, tips back his fedora and surveys the land his family has tended for generations. He then kneels down and expertly severs a 2-foot squash from its stem.

The Water for Life video illustrates the work of Catholic Relief Services in partnership with the... END_OF_DOCUMENT_TOKEN_TO_BE_REPLACED

An activity that requires participants to carry water, joining them in solidarity with people who... END_OF_DOCUMENT_TOKEN_TO_BE_REPLACED