A woman trekking to collect water in the next village stops when she comes across a team of mechanics dismantling a well pump that hasn’t worked since last year. Pausing, she clasps her hands in prayer and looks to the sky asking for the pump to be repaired quickly, and then continues on her way a moment later. 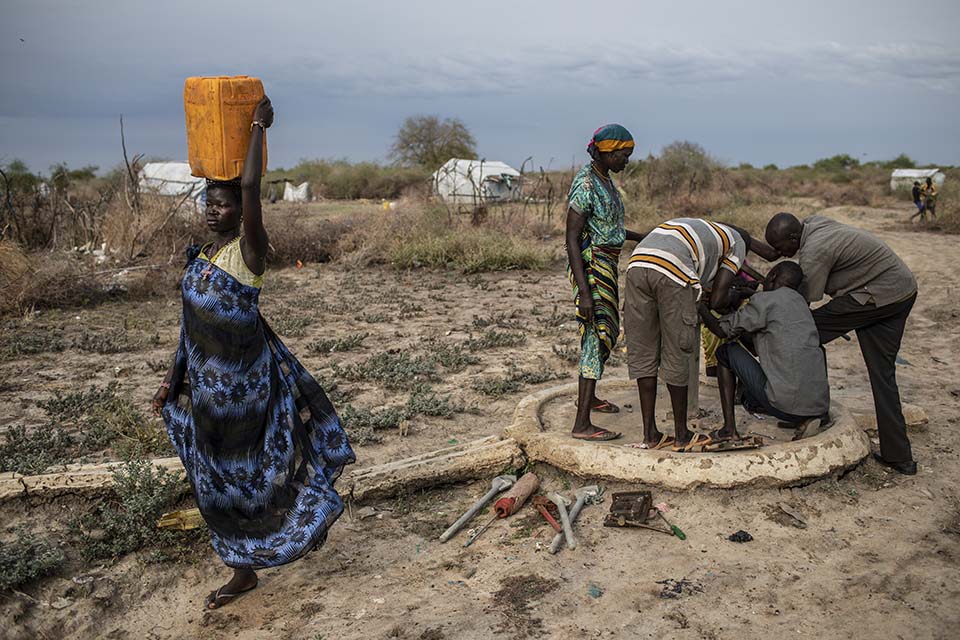 Mechanics dismantle a well pump as part of a CRS-led project that improves food security and helps conflict-affected communities build resilience to shocks such as floods, drought and conflict.

“People here used to use this well but since it has been broken they’ve had to go somewhere else and queue up for water,” says Mary Mano, a pump mechanic trained by Catholic Relief Services in Pibor county, east-central South Sudan. Not having a community well is a big inconvenience for women like the one who passed by, she explains.

Floods last year in South Sudan submerged countless wells across the state of Jonglei, leaving them contaminated or out of working order.

“Once the water level recedes, you find that many of the wells have collapsed, or the cylinder [pump mechanism] doesn’t work, so we go well to well to fix them,” Mary says. 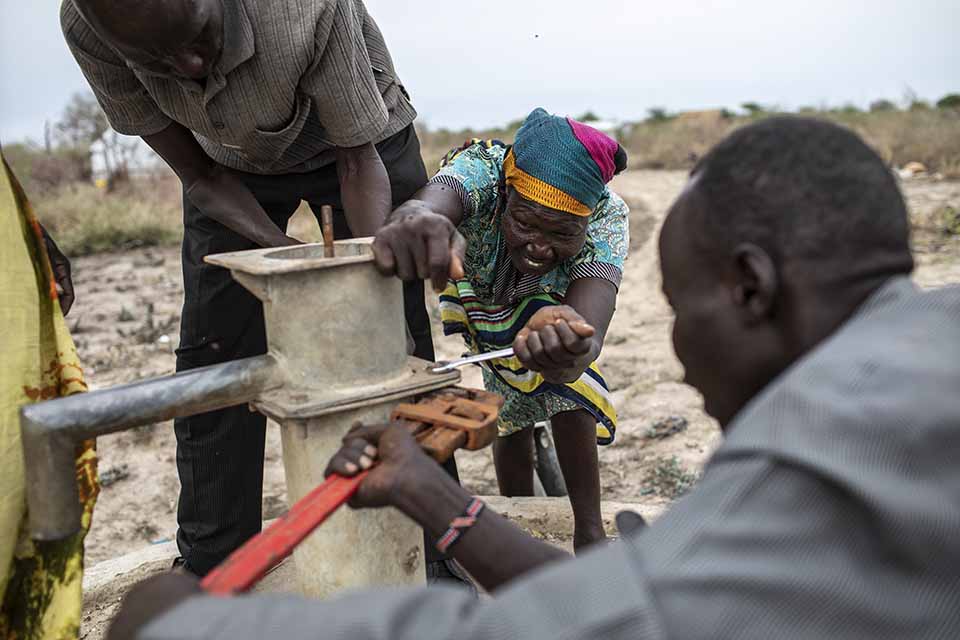 Mary Mano, center, and other mechanics inspect a well pump they repaired in their community in South Sudan.

As part of the Resilience and Food Security Program led by CRS, community-based pump mechanics are provided with access to tools and trained to repair and maintain wells. The program, funded by the U.S. Agency for International Development Bureau for Humanitarian Assistance, improves food security and helps conflict-affected communities in Jonglei state build up resilience to shocks such as floods, drought and conflict. Mary’s team first received training on well maintenance in 2017, and since then has taken part in additional workshops.

Dismantling a well pump is an arduous task, typically requiring seven people to help with the heavy lifting. On this particular day, removing the casing proved difficult. 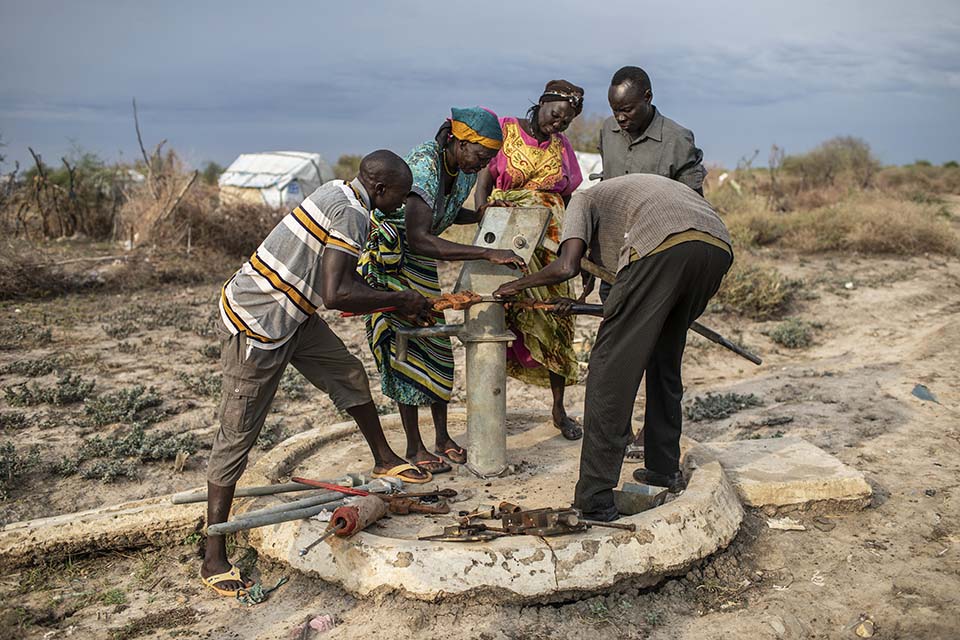 Pump mechanics dismantle a well pump to repair it. Their work helps build resilience and improve livelihoods, health and social cohesion, among other benefits.

“The nuts and bolts attaching the pump were rusty, so it was a little hard to open,” Mary says. Once the outer casing was removed, they found that debris from the flooding—including glass, mud, dirt and plastic—had clogged up the pump mechanism.

“After removing all the casing pipe, we remove the cylinder. Inside the cylinder, there is some rubber. If there is a problem with the rubber, we remove it and replace it. Then we reassemble everything,” she says.

Mary’s team is a mix of women and men. She believes it’s important for women to have a role in managing water resources.

“CRS was the first to introduce the idea of women as pump mechanics. We understand now that we can do something just like a man,” she says. 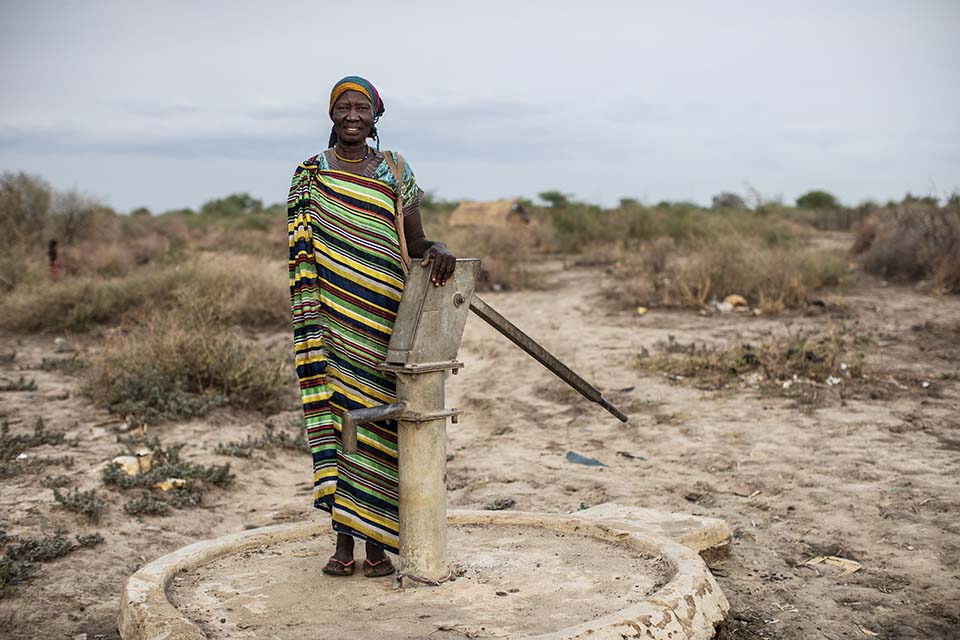 Mary Mano, a pump mechanic, was trained as part of a food security and livelihoods program led by CRS.

“For women, because we are the ones handling issues around the home. If there is no water, then the children will be dirty and the utensils we are supposed to clean will not get washed. So if there is no water it affects women more.”

After a well has been fixed, the water is tested. If it is deemed drinkable, the community is informed of the new resource and asked to form a water management committee to look after the well. One of the first priorities is putting up a fence to keep animals away, explains Marco Lotiko, also a well pump mechanic.

“There are areas where people are living close together with their cattle. If we don’t fence off the well, you will find that the cattle sometimes defecate on top of the well or next to the well. Then that seeps down and contaminates the water,” Marco says. 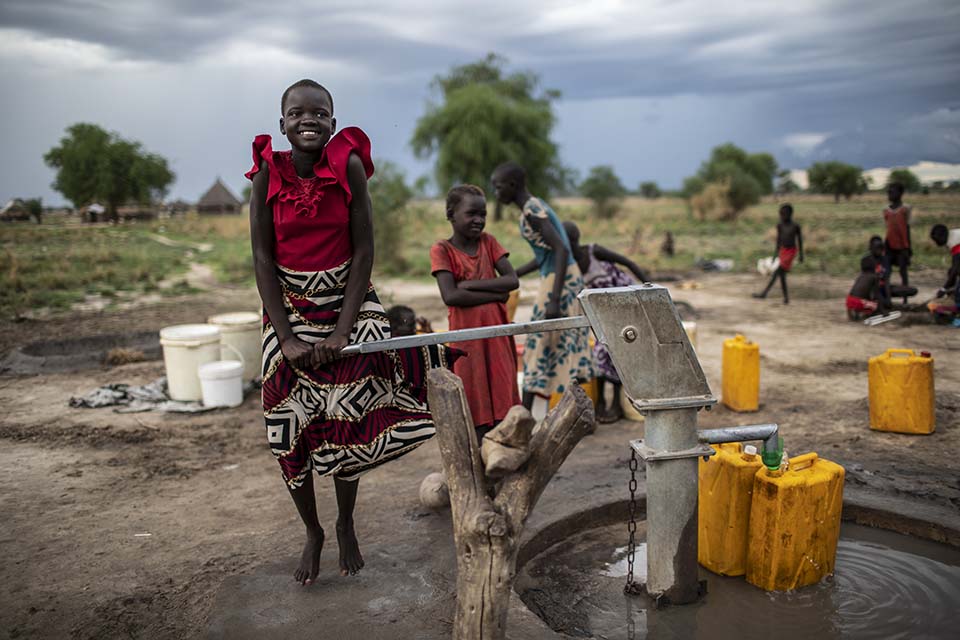 Girls pump water at a well in Chabar, a village in east-central South Sudan. Water sources near their homes make is safer for girls to collect water for their families.

“If you have only a few wells, it creates conflict. Sometimes you will find that people will even get into fights. When we fix a well, it means the people in that area have closer access to clean water and they don’t have to go to another community’s well,” she says.

Nyaluak Deng, a member of the Chabar village water management committee, says that nearby access to wells also improves security. Before the Chabar well existed, families did not feel comfortable sending girls long distances to collect water, fearing abductions by other ethnic groups.

“Because the well is nearby, the younger girls can come. But if the water point was far away, I would have to come fetch water myself because there is fear of insecurity here,” Nyaluak says. “Now it is possible that if you have a lot of chores to do at home, a small girl can come and fetch water to help you out.”

Further water points may only be an additional 10-minute walk, but because of overcrowding the wait in line could take an hour.

“Since the well was created here, things like overcrowding, which can cause problems for girls and women, has been reduced. It has changed our lives in terms of time and in terms of problems that were caused by having only a few available water points around here,” Nyaluak says. That is one reason they have such a vested interest in maintaining the well. 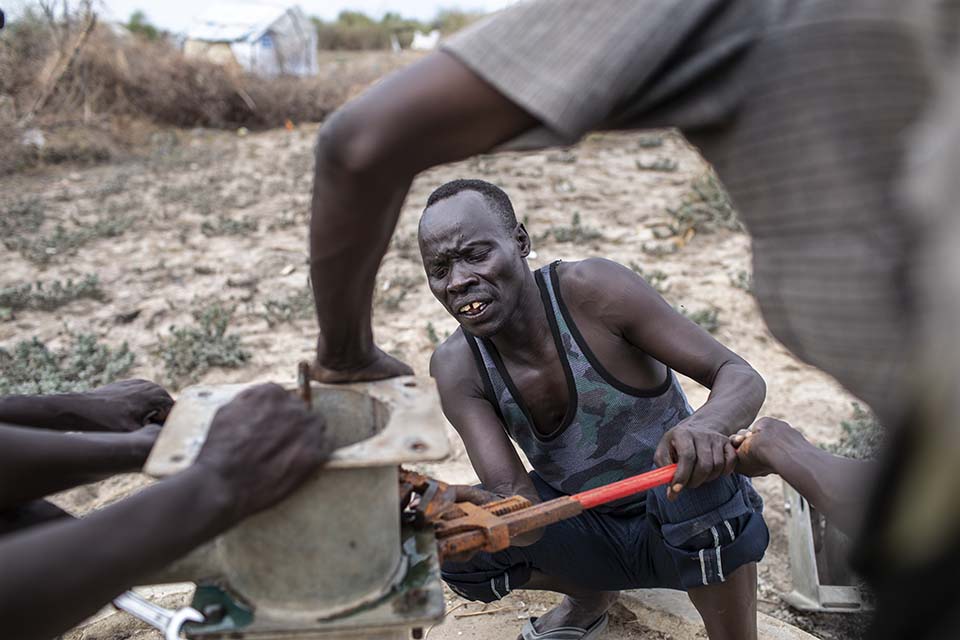 Marco Lotiko and other mechanics fix a pump in South Sudan. The team was trained as part of the CRS-led Resilience and Food Security Program.

“We pay close attention to the water point because if it breaks down, it will be hard to get parts to repair it,” she says. When a pump breaks down, the committee collects a fee from each household to have it fixed, as happened in March 2021.

“The chain broke, so we collected money and sent the money to [a supplier in a nearby town]. We bought a new chain from there and then the water pump was fixed,” she says. On another occasion, community members scavenged parts from pumps in other areas that were not in use.

“We are afraid now if the pump breaks down again, we don’t know where to get parts,” she says.

Mary agrees with these sentiments. “We need more tools and supplies like the pipes and cylinders. Then in case one of the pumps gets broken, we can just remove the broken part and replace it,” she says.

Such services are critical for rural communities. “Even if we do not get much payment, we are still willing to do maintenance on the pumps and ensure that communities get access to clean water,” Mary says. “CRS has given us the knowledge. If CRS leaves, we will not give this up, we will continue in the same spirit to support the community.”