Providing Water and Relief for South Sudanese Refugees in Uganda

Lorna Jeruwa, 15, fled South Sudan with her 2 little brothers when fighting broke out in November 2016. They became separated from their mother, so Lorna now has the responsibility of feeding and taking care of her brothers, Isaac and Francis. They are living in Bidibidi, a refugee camp in northern Uganda, with seven other children. Lorna does not know where her mother is today. Food is scarce.

“They were delayed in bringing food aid, so we had to look around for what to eat,” Lorna says. “We got this cassava, and we must ration it until next week when food will be supplied.” 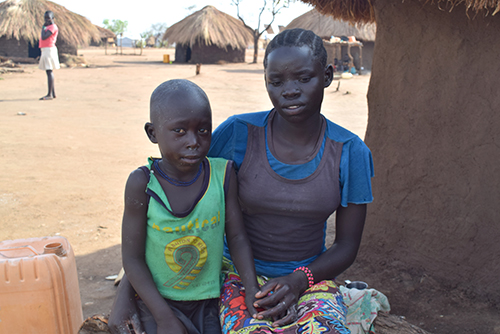 Lorna Jeruwa and her two younger brothers are living without any adult protection in the Bidibidi refugee camp in northern Uganda. Photo by Flavia Lanyero/CRS

But food is not their only need. Many young people have become heads of household and struggle to balance their studies with taking care of their siblings. According to the U.N. High Commissioner for Refugees, Uganda’s refugee settlements are home to 2,759 children who have been separated from their parents or caregivers, as well as 1,925 children who are not accompanied by any adult.

“Life is hard here. I cannot even buy sanitary pads or soap,” Lorna says. “There is no one to support me. If my mother was here, maybe she could have helped me.”

Lorna is not alone in her situation. Just 5 years since South Sudan gained independence, fighting between government and opposition forces has uprooted more than 1.5 million people. South Sudan has become the largest refugee crisis in Africa, and the third largest in the world, after Syria and Afghanistan.

“We left with nothing and spent 2 days walking without food or water. Now we are here, but still we face challenges.” — Lorna Jeruwa

An estimated 813,908 South Sudanese refugees are in Uganda. The vast majority—86%—are women and children. To reach safety, most walked through the bush for several days because they feared being attacked on the roads.

“We heard gunshots at our neighbor’s and quickly ran away to the bush,” Ruth says. “We left with nothing and spent 2 days walking without food or water. Now we are here, but still we face challenges.” 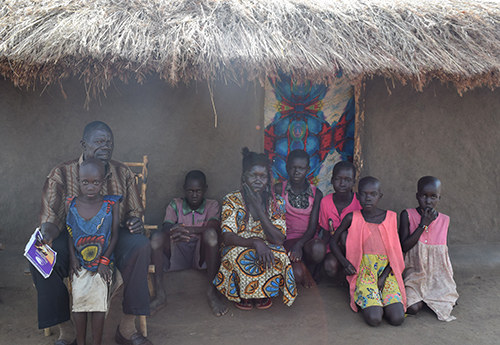 Ruth’s biggest struggle is gathering water. A household needs water every day for cooking, cleaning, bathing and drinking. Ruth owns only 2 5-gallon cans to hold water. That means she must make several trips to a camp water source every day to meet the family’s needs. To make matters worse, the water taps are often crowded.

“It can take up to 2 hours to fetch 1 trip of water because there are many people. Sometimes the taps are closed to regulate the water use,” Ruth says. “At times, we have had to go hungry because we didn’t have water to cook food.”

According to the UNHCR, the Bidibidi camp has become one of the largest refugee settlements in the world, having received 272,206 refugees. While new settlements are opening to support the rapid influx of South Sudanese refugees, major needs remain for refugees like Lorna, Ruth and their families.

With your support, Catholic Relief Services continues to work with partners to scale up critical water infrastructure and sanitation and hygiene assistance at the settlements.

August recess is a key moment to meet with your members of Congress while they are out of session... END_OF_DOCUMENT_TOKEN_TO_BE_REPLACED

Use this calendar for key dates to reflect and take action with your community to address climate... END_OF_DOCUMENT_TOKEN_TO_BE_REPLACED