In a context of chronic poverty or illness, where resources are always in short supply, learning new skills for communicating with your children and for becoming a better parent may not seem like the top priority. But caregivers in Lesotho have found that when relationships with those they love are right, then that social support can safeguard children for a brighter future.

The Coordinating Comprehensive Care for Children (4Children) project, a 5-year USAID-funded project, works to improve health and wellbeing outcomes for orphans and vulnerable children affected by HIV and other adversities. Improving parenting skills of caregivers affected by HIV is having lifelong effects for the caregivers and their children. Even in contexts of chronic need, caregivers are testifying to the value of positive parenting in bringing harmony and health to their families.

‘Matsebo Nkesi, 14, and her mother ‘Madaniel Nkesi were like strangers. ‘Madaniel is a primary school teacher and often her busy schedule prevented her from spending time with her daughter.

Both enrolled in the Rethabile program which focused on building a positive parent-teen relationship through open communication.  ‘Madaniel quickly learned her daughter needed praise.

“To me, a child has the responsibility of doing chores in the house, so why must I praise her for that?” she asked.

She later testified to the group that after regular home practice, she was able to praise ‘Matsebo for the good deeds she performs. 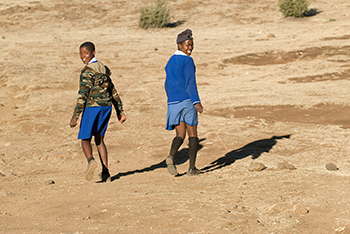 Caregivers are testifying to the value of positive parenting in bringing harmony and health to their families. Photo by David Snyder for CRS

‘Matsebo and ‘Madaniel’s once rocky relationship was not the only one that has been helped by the Rethabile program. Thandiwe Lekhema, 14, and her mother ‘Makhahliso also struggled with communication, and as Thandiwe got older, ‘Makhahliso wished she could talk to her daughter about boys and getting married early.

Joining the Rethabile Teen program broke the ice between the mother and daughter. They got to know each other better, and, as a result, Thandiwe confided in her mother about getting a marriage proposal from a man who was 11 years older. Moreover, she had been getting threats from the man, but couldn’t speak to her mother about it.

When ‘Makhahliso heard the story, she followed up and discovered that the man who had proposed to her daughter was the son of Thandiwe’s teacher. Through some of the skills, like listening and problem solving, that she gained in the parenting classes, ‘Makhahliso was able to deal with the situation calmly. She talked to Thandiwe’s teacher who was also shocked to learn that her son was pressuring a girl who was one of the youngest students in her class.

It was decided that Thandiwe's teacher would go and talk to her son, making him aware of the consequences of his thoughts of marrying a young girl.

Besides gaining a closer relationship with her mother, Thandiwe says she knows her dignity, education and health are priorities right now.

The open communication between mother and daughter helped to protect Thandiwe's future.

This project is made possible by the generous support of the American people through the United States President’s Emergency Plan for AIDS Relief (PEPFAR) and the United States Agency for International Development (USAID) under cooperative agreement AID-OAA-A-14-00061. The story contents are the responsibility of 4Children and do not necessarily reflect the views of USAID or the United States Government.

We seek daily renewal from the source of all life, and so we pray ... END_OF_DOCUMENT_TOKEN_TO_BE_REPLACED

Our walk with God is reflected in our walk with others, and so we pray ... END_OF_DOCUMENT_TOKEN_TO_BE_REPLACED