The program reaches families of children who show signs of moderate acute malnutrition and teaches them about the health benefits of this dish. Although Tom Brown mixes can be bought in stores, high levels of poverty make this a luxury many cannot afford. So, CRS teaches families how to make it themselves, helping them before their symptoms become worse.

Poverty and economic disruptions caused by a decade-long regional conflict have significantly increased levels of malnutrition in children in northeastern Nigeria. Poor nutrition inhibits growth and development at a critical age for children and can have a lifelong impact. Families in the region grapple with the high cost of food and a lack of awareness of children’s nutritional needs. 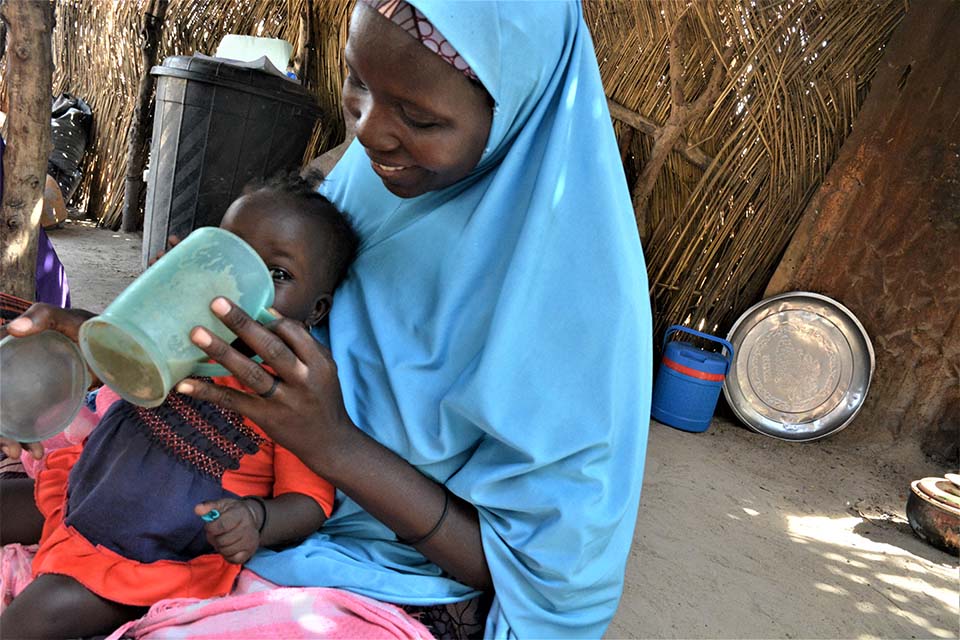 Made with local staples like soybeans, millet, sorghum and peanuts, and using a simple recipe, Tom Brown has been a popular dish for generations in West Africa, but many do not realize it is also particularly nutritious. With grants from the U.S. Agency for International Development  Food for Peace program, the O'Neill Foundation and Latter-day Saint Charities, CRS works with local partners to conduct house-to-house malnutrition screenings for all children across selected communities in the Borno state of northeastern Nigeria using mid-upper arm circumference measurements. Children identified as malnourished are enrolled in the supplementary feeding program for eight weeks.

Fatima was screened when she was 7 months old. Her arm measurement was 4.8 inches, which fell within the range considered to be moderately malnourished for her age group. Fatima had not been exclusively breastfed as an infant. Her mother, Aisha, did not know the benefits of doing this, so Fatima was fed a common mix of millet, potash and sugar, which she frequently refused. Fatima cried often, rarely slept through the night and had regular bouts of diarrhea.

When CRS enrolled Fatima in the supplementary feeding program, Aisha and other caregivers participated in trainings on best practices for feeding infants and young children, as well as hygiene counseling. They were also assigned to supplementary feeding mentorship groups. Aisha says she learned about breastfeeding and hygiene—particularly in infant food preparation—and how to make Tom Brown herself. During the eight-week period, a trained “lead mother” hosted weekly Tom Brown preparation sessions using resources provided by CRS. Aisha, along with other caregivers helped to prepare and mix the cereals, and received weekly Tom Brown portions for their babies.

Fatima is now 9 months old and her arm measurement has improved to almost 5.5 inches. Aisha is proud. She says her baby looks bigger and healthier—much healthier than her three other children did at Fatima’s age. Aisha says it helps that Fatima has taken to eating Tom Brown. With her previous porridge mix, Fatima would only eat the equivalent of half a cup of powdered cereal daily. Today, she finishes two cups of Tom Brown a day, sometimes even more. Aisha says she was sad when she understood that Fatima was malnourished. In retrospect, she realized Fatima wasn’t eating enough and that the frequent diarrheal episodes contributed to her weight loss. 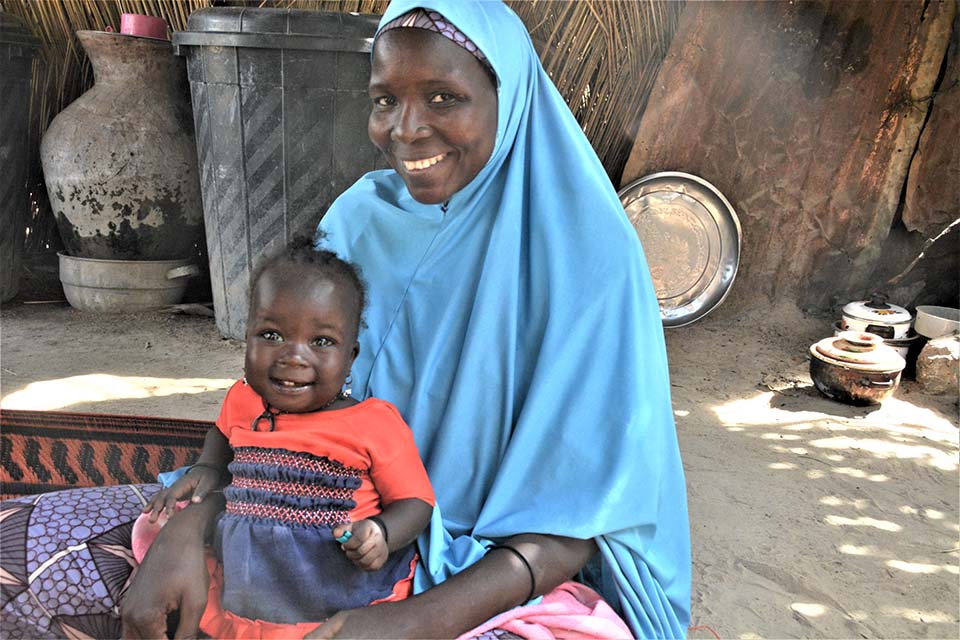 Nine-month-old Fatima and her mother participated in an eight-week supplementary food program that prevented the baby’s moderate acute malnutrition from becoming more severe.

“I’ve now learned it was bad hygiene practices that caused the frequent diarrhea,” says Aisha. “Before, I did not even bother to cover Fatima’s food. I now always do that. I also wash my hands before making her food and feeding her.

“Fatima loves Tom Brown. Before, she used to agree to eat only twice a day—now it’s about four to five. People have been surprised with the way Tom Brown is curing Fatima. My husband is impressed.”

Fatima has completed her eight-week supplementary treatment and fully recovered. But now that Aisha understands how nutritious it is, she prepares Tom Brown at home regularly and even adds her own spices and seasonings to her recipe. And she teaches other caregivers in her community about Tom Brown, as well.

Today, she is a lead mother on CRS’ supplementary feeding program. Aisha and other selected caregivers in her community volunteer to lead Tom Brown preparation demonstrations for caregivers of newly enrolled children. CRS trains the lead mothers like Aisha and equips them with cooking utensils, ingredients, and a small sum of money to cover the costs of grinding the cereals and transportation.

Families in Borno state are now taking to the supplementary feeding program and sharing what they’ve learned within their communities.

“There is a high level of acceptance of Tom Brown as community members are making it themselves and know what all the ingredients are,” says Jacinta Igwe, a nutrition officer for Maiduguri, the capital of Borno state.

CRS has seen 89% of children enrolled in the eight-week program finish with healthy results. The agency continues to scale up the program in the conflict-affected northeast to prevent more children from deteriorating to severe acute malnutrition.

August recess is a key moment to meet with your members of Congress while they are out of session... END_OF_DOCUMENT_TOKEN_TO_BE_REPLACED

Use this calendar for key dates to reflect and take action with your community to address climate... END_OF_DOCUMENT_TOKEN_TO_BE_REPLACED