On most weekdays, Lerato spends hours hunched over a sewing machine, stitching waistbands into running pants that will eventually be sold in the United States. Her small, repetitive movements and birdlike frame are easily lost in the whizz of the cavernous factory. 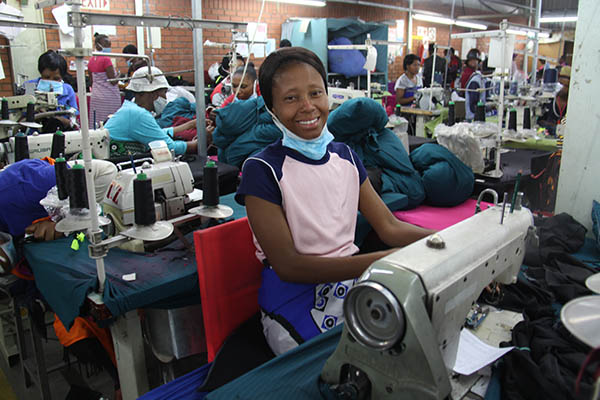 Lerato, 25, works at a textile factory in Maseru, Lesotho’s capital city. Through a CRS HIV-prevention initiative, the single mother is learning how to save money so that she can build a better life for her children. Photo by Nikki Gamer/CRS

“I get tired of sitting around for a long time,” Lerato says. “But the money helps me feed my family.”

In Lesotho, a small, landlocked country surrounded by South Africa, a growing textile industry has given thousands of young women like Lerato the opportunity to earn a living for the first time. And while the work can be grueling and the pay low, the factories—with their concentration of young women—are becoming ground zero in the country’s fight against HIV infection. CRS has partnered with these factories, concentrated in Lesotho’s capital, Maseru, to roll out DREAMS, which stands for for Determined, Resilient, Empowered, Aids-Free, Mentored, and Safe.

DREAMS is a 10-country initiative funded by the U.S. Agency for International Development. Its goal is to reduce HIV infection among adolescent girls and young women by 40%. In Lesotho, CRS is one of several partners working on DREAMS. Because women ages 15 to 24 are the demographic with the fastest growing rate of new infections, that is where DREAMS efforts are focused.

According to Molarisi Mehale, CRS technical director for HIV-related programming in Lesotho, the high incidence is largely due to sexual exploitation. In fact, married men propositioning young women is so common that, paradoxically, the men are called “blessers.” They likely migrated to South Africa for work, and when they return to Lesotho they often have HIV as well as money.

“Poverty is driving this predatory culture with men. These young women are sitting at home without money and are looking to survive,” Molarisi says. “The boys their age don’t have money, so they think of older men. That’s when the relationships become transactional. Men think it’s acceptable to get a younger girl, and girls are willing. But once the girls enter those relationships, they have no power.”

CRS DREAMS strives to make woman less susceptible to predators through activities like role-play, problem-solving exercises and group discussions offered during lunch breaks at the factories. 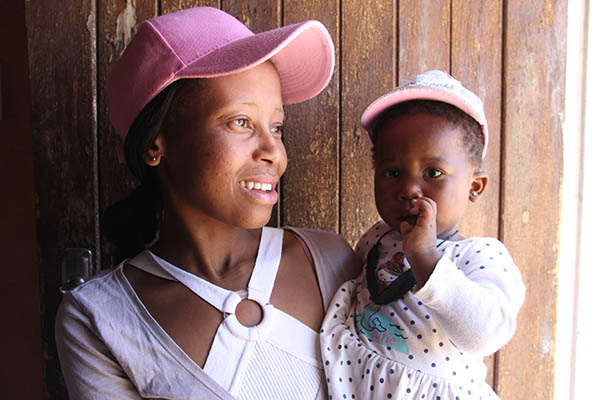 While Lerato (pictured with her daughter) is HIV-free, she is among the tens of thousands of young women who are most at risk for HIV infection in Lesotho, where one in every four people has the disease. Photo by Nikki Gamer/CRS

“The most at-risk girls and young women typically don’t have strong social networks. Through DREAMS, we try to help them develop stronger relationships with peers and adults who can give them emotional support and information, and help them feel less socially isolated,” says Erica Dahl-Bredine, CRS country representative in Lesotho.

“We help these women participate in savings and lending groups. Girls become more empowered socially and economically. This has been shown to help them decrease risky behaviors and better protect themselves from abuse,” Dahl-Bredine says.

Lerato has two children under age 5. She didn’t finish high school because after her mother died, the family didn’t have enough money to pay school fees. She can’t afford to care for both of her children with what she earns sewing, so her son lives with her father. Her husband is out of her life because he was physically abusive.

“He was always beating me,” Lerato said. “I told his mother but his mother did nothing about it.”

Since Lerato’s base salary only lasts until the third of the month, she has fallen into debt to pay for food, transportation and her siblings’ school fees. Most of the factory workers work a sixth day each week to earn overtime pay.

“Sometimes we run out of money, and we have to get money from loan sharks,” Lerato says, but DREAMS savings activities have helped alleviate some of Lerato’s burden.

“With DREAMS we’re taught to save money, so when problems arise we shouldn’t have to go to the loan sharks,” she says. Lerato also tapped into DREAMS’ saving and lending program to start her own business, so she can begin climbing out of debt. The interest on the money she owes to loan sharks is about 30%, she said.

Lerato’s aunt travels back and forth to South Africa, so Lerato pays her to buy biscuits, perfumes, spices and other items she can sell to fellow factory workers to earn a profit.

Now, besides the $100 she makes monthly at the factory, Lerato earns about $60 dollars from her small business. “First, I want to pay off my debts,” she says. “Then, I want to go to catering school and start a catering business.”

Since 2016, the CRS DREAMS initiative has reached over 60,000 people in Lesotho, including 40,000 girls and young women. Beyond the factories, CRS DREAMS includes parenting and caregiver training to strengthen families, as well as job training and placement, internships, and mentoring.

One of the main takeaways for Lerato—beyond the savings she’s accumulating through DREAMS—is an increased sense of patience and resiliency.

“DREAMS taught us to have patience. Every goal that I want to achieve, I’ll only get it if I am patient,” she says.

Dahl-Bredine says that at its heart, DREAMS is ultimately about behavior change.

“They are better able to speak up for themselves and to express their views,” Dahl-Bredine says. “They have greater aspirations for their lives. They don’t feel they need older men to provide for them or make them feel better about themselves. And they believe they have control over their future.”

Help Where It’s Needed Most

We seek daily renewal from the source of all life, and so we pray ... END_OF_DOCUMENT_TOKEN_TO_BE_REPLACED

Our walk with God is reflected in our walk with others, and so we pray ... END_OF_DOCUMENT_TOKEN_TO_BE_REPLACED