Preventing and Treating HIV and AIDS in Nigeria

Some of Blessing Okoro’s* earliest memories are seeing her mother, Ngozi*, in tremendous pain, vomiting and losing weight quickly.

Blessing was 12 years old, straddling childhood and adolescence in her village in Nigeria.

“She was really sick,” Blessing says of her mother. “I thought she was going to die.”

And then everyone left. People were afraid that merely looking at Blessing’s mom would make them sick as well.

“Even my dad, they all left us, just like that” says Blessing. “I didn't have any idea of what was going on. Nobody wanted us.”

But then the Okoro family found some people who wouldn’t leave–Catholic Relief Services and our local Church partners.

“That was the moment I knew everything was going to change,” she says. 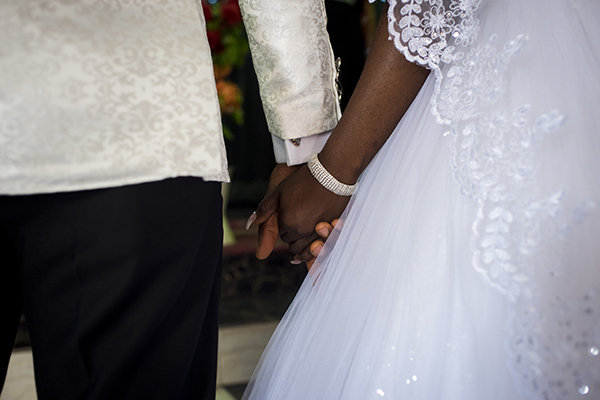 When Blessing Okoro was married in Nigeria, it was an occasion to reflect on her life’s journey. She says CRS and our local partners helped make this dream, her marriage, possible. Photo by Michael Stulman/CRS

That was in 2004. As Blessing speaks today, it’s the eve of her wedding ceremony. She feels the accumulation of the experiences of those years – good and bad.

“I don't know if I should say I'm sad or happy, because if I think of how it all started, today shouldn’t be possible,” says Blessing.  “But I went to university. It was tough. I had crazy challenges, but I knew where I was coming from, so I told myself I could do it, and I did it.”

“What started back then made me stronger today, and made me face any challenge,” says Blessing.

The burden of HIV and AIDS

Blessing’s mother was sick because of HIV. At the time, Nigeria’s HIV prevalence rate was 5 percent, and the disease was viewed as a death sentence.

“They didn’t know what was wrong with me until I went to the hospital and we discovered it was HIV,” Ngozi says.

“The way I was looking, people would say today or tomorrow I would die, so there was no hope. My children dropped out of school. There was no money anywhere.”

Blessing was tormented by her mother’s pain. She was forced to put away childish things and become an adult, though she could not escape a sense of powerlessness.

“I had to take care of my mom and my kid sister.” she says. “We went to bed hungry— several times.”

Kemi Ezeanyim, a program manager at the Catholic Church’s Department of Health Service Providers, explains, “The burden of HIV and AIDS was so much on the children back then. The effects were on them. They were burdened by ignorance, burdened by poverty.

“These kinds of situations made the children vulnerable—to take desperate measures. Some of them became the breadwinners, dropping out of school and doing manual labor to provide for their parents. Some of them went into prostitution. You saw a lot of human trafficking cases due to the HIV and AIDS epidemic,” she says.

“They gave us everything”

Kemi says she will never forget the first day Ngozi came into her office. 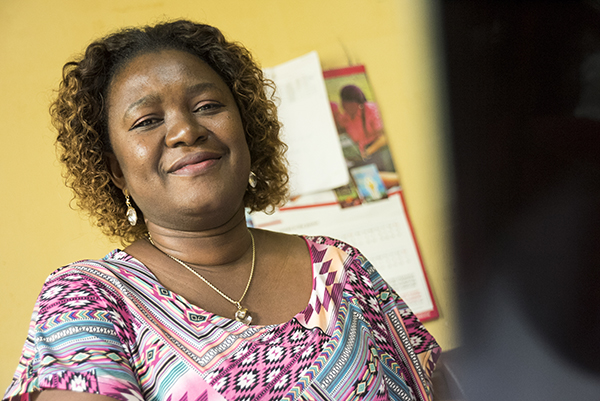 Kemi Ezeanyim, who works with a CRS partner in Nigeria, helped Blessing’s family survive and thrive despite HIV and AIDS. Photo by David Snyder/CRS.

“She was skeletal. She was really bad. We didn't know if she would survive,” Kemi says.

“I told myself I'm not going to die. That HIV isn't going to kill me. I'm a strong woman,” she says.

That strength helped save her life.

“She was taken to the hospital, because we can't give up on someone who would not give up,” Kemi says. “And after a few months, she really responded to medicine.”

The price of antiretroviral drugs used to treat HIV were beginning to dramatically decline, and with treatment, AIDS went from a death sentence to a chronic, but treatable disease.

And the Okoros got more than medicine.

“The Church gave us all the support we could ever need: Physically, emotionally, mentally–everything,” says Blessing. “They gave us everything.”

A way out of poverty

Since HIV requires life-long treatment and care, Ngozi needed a way to earn an income to provide for her family as she lived with the virus.

CRS and our local partners launched a project called SUN, or Scaling-up Nigeria’s Response to HIV and AIDS. It was funded by the U.S. President's Emergency Plan for AIDS Relief. One of the goals was to help people like Ngozi, so they could not only improve their health, but also find a way out of poverty.

“They came and asked, ‘How can we empower you?’ And I said, ‘I want a freezer.’ They bought one for me,” Ngozi says. That appliance allowed her to open a shop, selling cold drinks. It prospered. “Today I have 26 freezers and three shops,” she says.

As the years went on, Ngozi and her daughters saw their lives improving–better health, income, education. They found new friends and some old ones came back, including Blessing’s father.

“I had to let go and forgive him, and we became a family again,” she says.

Kemi says the attitude of the community has changed. “It took years of hard work, so much awareness campaigning and advocacy, and then providing counsel and support to those who were positive,” she says. “Now, people come out to get tested willingly. There's nobody who will say they haven't heard of HIV.”

Ngozi and her daughters have accomplished a lot in the last decade. Blessing, now 26, finished university, and works at a private bank. Her younger sister is finishing university next year. And Ngozi has become an advocate and caregiver for people with HIV and AIDS in her community.

And now Blessing is about to get married.

“I'm on top of the world,” Ngozi says. “I'm the happiest person on earth. She made me proud.”

Blessing says if it weren’t for CRS and our partners, her life could be a lot different today.

“I just wonder what would have happened to us, what would have gone wrong? We're girls.  We were vulnerable. People might have taken advantage of the fact that we needed help,” she says.

“It was God that had a plan for us,” Blessing says. “I'm forever grateful.”