Pope Francis Quotes on Poverty, Care for the Poor

As the shock waves of Pope Francis' apostolic exhortation, Evangelii Gaudium (The Joy of the Gospel), settle, its impact is becoming clear. Addressed to the Church, rather than the entire world (as papal encyclicals are), it nonetheless seems that, suddenly, the whole world is listening. 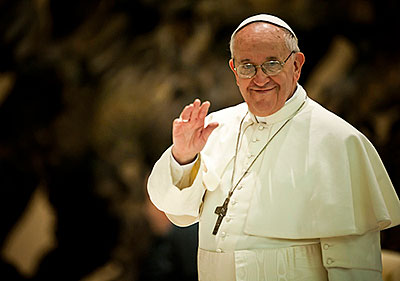 But it remains first an exhortation to the faithful—to respond to the Gospel, to live it more fully and more deeply, to reach out to the poor and broken, to end injustice, to build peace. And to find the joy in all of it.

And so rejoice we do at the challenge he lays before us—a challenge the Church is taking up by setting a goal no less ambitious than ending hunger by 2025.

Below we share some excerpts from Evangelii Gaudium that underpin the challenge—and the joy—the Holy Father has laid before us.

37. Works of love directed to one's neighbor are the most perfect external manifestation of the interior grace of the Spirit….

48. We have to state, without mincing words, that there is an inseparable bond between our faith and the poor. May we never abandon them.

53. Just as the commandment "Thou shalt not kill" sets a clear limit in order to safeguard the value of human life, today we also have to say "thou shalt not" to an economy of exclusion and inequality. Such an economy kills.

How can it be that it is not a news item when an elderly homeless person dies of exposure, but it is news when the stock market loses two points? This is a case of exclusion. Can we continue to stand by when food is thrown away while people are starving? This is a case of inequality.

54. Almost without being aware of it, we end up being incapable of feeling compassion at the outcry of the poor, weeping for other people's pain, and feeling a need to help them, as though all this were someone else's responsibility and not our own.

The culture of prosperity deadens us; we are thrilled if the market offers us something new to purchase. In the meantime, all those lives stunted for lack of opportunity seem a mere spectacle; they fail to move us.

57. I encourage financial experts and political leaders to ponder the words of [Saint John Chrysostom], one of the sages of antiquity: "Not to share one's wealth with the poor is to steal from them and to take away their livelihood. It is not our own goods which we hold, but theirs.

177. …at the very heart of the Gospel is life in community and engagement with others. The content of the first proclamation has an immediate moral implication centered on charity.

187. Each individual Christian and every community is called to be an instrument of God for the liberation and promotion of the poor, and for enabling them to be fully a part of society. This demands that we be docile and attentive to the cry of the poor and to come to their aid.

188. In this context, we can understand Jesus' command to his disciples: "You yourselves give them something to eat!" (Mk 6:37): it means working to eliminate the structural causes of poverty and to promote the integral development of the poor, as well as small daily acts of solidarity in meeting the real needs which we encounter.

189. The private ownership of goods is justified by the need to protect and increase them, so that they can better serve the common good; for this reason, solidarity must be lived as the decision to restore to the poor what belongs to them.

191. In all places and circumstances, Christians, with the help of their pastors, are called to hear the cry of the poor…. Seeing their poverty, hearing their cries and knowing their sufferings, we are scandalized because we know that there is enough food for everyone and that hunger is the result of a poor distribution of goods and income.

198. This is why I want a Church which is poor and for the poor. They have much to teach us. Not only do they share in the sensus fidei, but in their difficulties they know the suffering Christ. We need to let ourselves be evangelized by them….

201. …none of us can think we are exempt from concern for the poor and for social justice….

203. The dignity of each human person and the pursuit of the common good are concerns which ought to shape all economic policies.

August recess is a key moment to meet with your members of Congress while they are out of session... END_OF_DOCUMENT_TOKEN_TO_BE_REPLACED

Use this calendar for key dates to reflect and take action with your community to address climate... END_OF_DOCUMENT_TOKEN_TO_BE_REPLACED