This past month, the Catholic world marked its first year walking in the faith with Pope Francis. In 1 short year, he's been celebrated for his words and his actions, both inside and outside the Church, renewed the call of the Gospel and brought deep meaning to the mission of Catholic Relief Services. 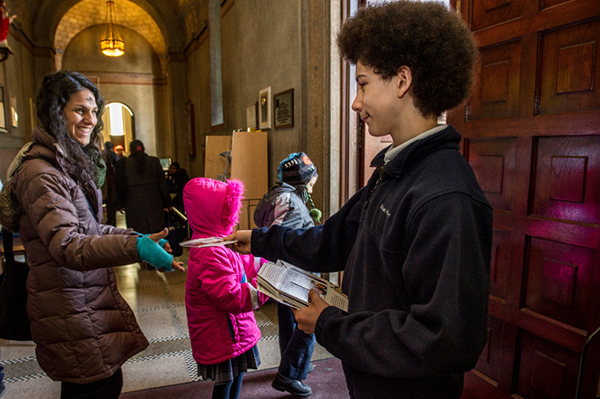 Nico Mora of the Shrine of the Sacred Heart Parish in Washington, D.C., distributes CRS Rice Bowls at the end of Ash Wednesday Mass. Photo by Karen Kasmauski for CRS

So, hooray for Pope Francis. But, like all the popes and saints before him, he can't walk our walk for us. The real story of Pope Francis is not what he's done, but the challenge he's laid before us: to respond to the Gospel. It's no coincidence that the signature moment of his first year is Evangelii Gaudium, his apostolic exhortation. He is, indeed, exhorting the Church, and the world, to respond.

At CRS, we've met people who've said no to despair and darkness and, in prayer, sacrifice, work, and solidarity, shine a brighter light in this world, bringing new hope to their brothers and sisters. We've seen people respond to the Gospel in places like the Philippines, the Central African Republic, Kenyaand here in the United States.

Pope Francis began his ministry during Lent. And what a great time to begin our own ministry. This is why CRS's flagship program in the United States is a Lenten program. CRS Rice Bowl is not only about raising money for our brothers and sisters; it's a chance to learn about our global neighbors, to engage more deeply and walk in solidarity. It's about making our Lenten journey one of conversion. We encourage you and your family to download the CRS Rice Bowl app, to join the #VivaLent Photo Challenge and to prepare some of our simple Lenten meatless meals, such as Malawi's Vegetable Ndiwo.

Great popes and holy saints are the ones who show us how to walk the whole way: from the fullness of the crowd to the solitude of the desert, to the cross on Calvary to the salvation and glory that lies beyond. Yes, they show us—but it's still our walk to make.

Invite a CRS Global Fellow to speak to your community during Lent to learn how your CRS Rice Bowl... END_OF_DOCUMENT_TOKEN_TO_BE_REPLACED