Medrick Phiri holds out his hand to show a few small, whitish peas. They are pigeon peas, a crop originally used to feed pigeons. But the humble legume now has a much bigger role. It’s answering the difficult questions posed by climate change for smallholder farmers like Medrick in the Chipata district of eastern Zambia.

Rows of healthy pigeon pea plants stand tall in Medrick’s field, soaking up the strong southern African sun. He is optimistic about his crop. 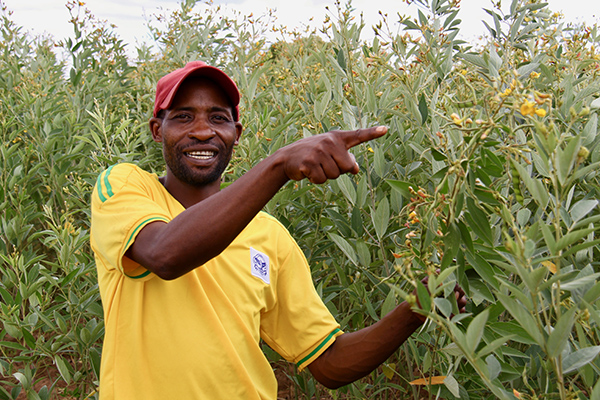 Mattias Phiri  shows off his pigeon peas: “This crop is good because it can survive the droughts, which come more frequent and last longer than before. And it improves the soil.” Photo by Tom Price/CRS

“I planted [about 9 pounds] of pigeon pea last year and had a nice harvest,” he says. “This year I planted  [11 pounds], and I expect a bigger harvest.”

Until 2 years ago, maize was growing here. Maize is still the staple crop throughout Africa. But it was drought that convinced Medrick and many of his neighbors to try pigeon pea instead. When asked about drought, he reflects that it has become more common.

“I’ve been farming for 15 years,” he says. “The dry spells have become longer and unpredictable.”

The pigeon pea survived the drought well, but the maize planted in Medrick’s region suffered. This is exactly why pigeon pea was chosen to be the focus of a Catholic Relief Services’ climate- smart agriculture program in eastern Zambia. In partnership with Caritas Chipata, Zambia’s Ministry of Agriculture and the World Food Program, more than 2,000 smallholder farmers are planting the drought-tolerant pigeon pea.

“The goal of the project is to increase the incomes of the farmers so that they are not going to have a food shortage. They can use the income realized from sale of pigeon pea to purchase food,” says Douglas Mwasi, CRS agricultural livelihoods program manager. In this part of Zambia, stunting, which is caused by malnutrition, was an alarming 43 percent in 2013.

The edible pigeon pea can be sold as a cash crop, but as a legume it has the bonus of adding nitrogen to the soil—improving the soil’s fertility for future planting seasons. In technical terms, it helps create sustainable agricultural production. Maize, while a good food crop, is less drought tolerant and depletes soil nutrients faster. The pigeon pea can grow in its own field, or be planted in alternating rows with maize or other crops.

Pigeon pea can also become a ratoon crop, meaning a new crop grows from the stubble of the last harvest. No new seed is needed. And a further bonus is green mulching. Pigeon pea provides ground cover that traps vital moisture in the soil. For this reason it is usually referred to as a green manure or cover crop. 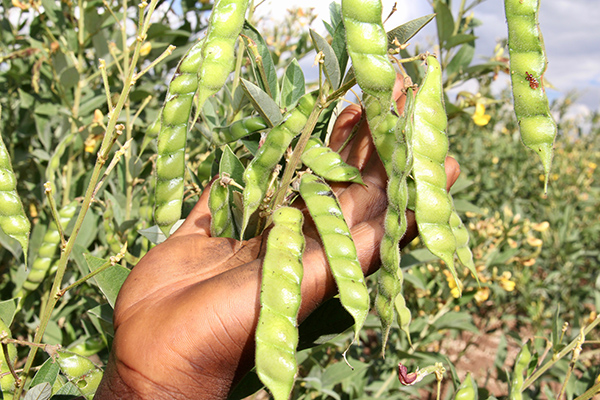 The drought-resistant pigeon pea rode out a long dry spell in January this year during what should be the rainy season. Pigeon pea provides nutrition to the soil and ground cover that traps vital moisture. Photo by Tom Price/CRS

Pigeon pea has a partner known to help farmers protect against climate change—the Gliricidia tree, sometimes known as “quick stick.” Much of the tree cover in eastern Zambia has been lost, typically cut away for firewood. Only a few mango trees remain. The fast-growing Gliricidia, also in the legume family, provides organic soil improvement and shade cover for crops. Gliricidia is a tough tree. It can stand losing branches stripped for firewood, and they swiftly grow back. In addition to 11 pounds of pigeon pea seed, the farmers were given 60 Gliricidia seedlings to plant.

“Many farmers were skeptical when the idea of planting pigeon pea was introduced,” says Mwasi. “’Why waste time and energy planting a crop that has no market’ I was told.”

The farmers had a point. Pigeon pea did not have a track record as a cash crop in Zambia. But the project sought to remedy that with a high-tech solution. The WFP introduced its Maano smartphone app. Billed as a “virtual farmers market,” it is designed to link smallholder farmers with buyers. Photos of crops can be shared as bids go back and forth. Few farmers in the Chipata district own a smartphone, despite tumbling costs. But that didn’t matter for the pigeon pea project.

The project uses agricultural development agents who network with their neighbors, educating, training and advising on growing pigeon pea and Gliricidia. Twenty-one of these “superfarmers” serve more than 2,000 follower farmers. The agents are volunteers, but receive extensive training. Each of them is equipped with a bicycle to cover the miles and a smartphone with the Maano app installed.

The agents and the Maano app are a vital link between farmers and buyers that many would-be project participants considered crucial to the viability of the pigeon pea crop. Using the Maano app, agents add photos, and data on the quality and quantity of the crop. Potential buyers negotiate with the agents on price and decide how much they want to buy. The buyer then gets a location of the agent and seller through the Maano app, and they arrange a meeting. If the buyer is pleased with the product, he or she provides the agent with a code, which is submitted to WFP for payment.

“This crop is good because it can survive the droughts, which come more frequently and last longer than before. And it improves the soil,” says Paitana Mwanza, another of the farmers who had chosen pigeon pea. “Before our maize would have a minimum yield, but after just one year it’s improved when planted with the pigeon pea.”

The humble pigeon pea has made a successful start in helping more than 2,000 famers adapt to the changing climate in southern Africa, but much more needs to be done. Farmer after farmer deliver the same message: Unpredictable weather is making farming much more of a challenge. As one farmer reflects, “the weather has lost its memory.”

The Scaling Production Systems Food Security and Climate Change Adaptation, or SPFCA, is made possible through the generosity a private donor, who supports innovative approaches to ensure food security for the most vulnerable farmers.

August recess is a key moment to meet with your members of Congress while they are out of session... END_OF_DOCUMENT_TOKEN_TO_BE_REPLACED

Use this calendar for key dates to reflect and take action with your community to address climate... END_OF_DOCUMENT_TOKEN_TO_BE_REPLACED