When Mayor Lorenzo Balbin Jr., of New Bataan in the Compostela Valley in the Philippines, set out to warn his constituents of an approaching typhoon, people were skeptical.

"According to our history, it was almost 100 years since a strong typhoon hit our area and most people here did not experience that, of course," says Mayor Balbin, whose town is in the southern part of Mindanao province.

Harry Cabiling, captain of the San Miguel "barangay," or neighborhood, had a similar experience. 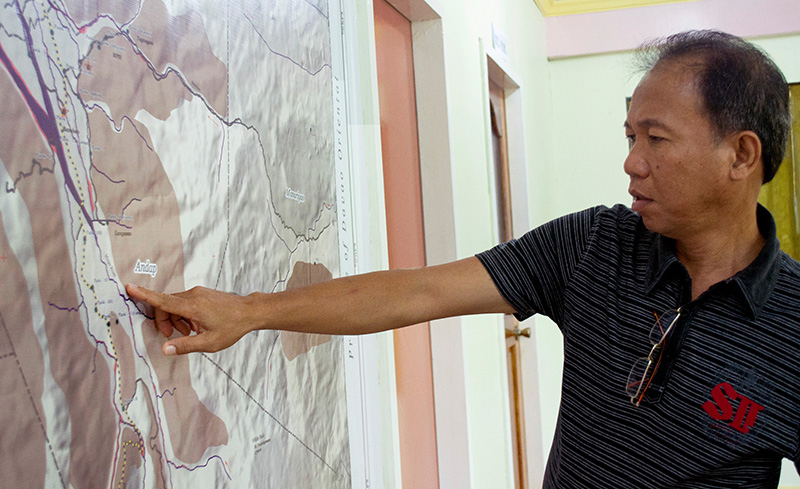 Mayor Lorenzo Balbin Jr. of New Bataan, Philippines, shows his town's typhoon risk map. New Bataan was ravaged by Typhoon Bopha in 2012. Photo by Maria April dela Cruz/CRS
"Some just laughed and the others shrugged their shoulders," he says. "We actually heard some people joking, 'What typhoon? Typhoon is only in can,' because that's the name of a popular cooking oil."

The skepticism might have been understandable, but it was also deadly. Typhoon Bopha, the December 2012 storm Balbin and Cabiling were warning about, left 1,146 dead, and 834 are still missing. More than 103,868 houses were damaged or destroyed.

One reason for the disbelief, ironically, was that Bopha came a year after another powerful storm, Typhoon Washi, hit nearby in northern Mindanao, causing flash floods that affected 1.1 million people, damaged nearly 52,000 homes and left millions without an income.

Two storms in 2 years seemed impossible. But now people fear that climate change is making such patterns common, endangering communities in the Compostela Valley that are not prepared like those elsewhere in the Philippines, where typhoons are expected.

So Catholic Relief Services, with funding from the U.S. Agency for International Development Office of Foreign Disaster Assistance, has started working in the Compostela Valley to strengthen disaster risk reduction and management, planning, and emergency preparedness.

So surprising was the power of Bopha that even Edwin Atamosa, leader of the San Miguel Barangay disaster risk reduction committees was not completely prepared. After the Philippines meteorological authorities warned that the storm was a Signal 3—one of the most powerful—all he did to prepare was put his important documents in a plastic bag. 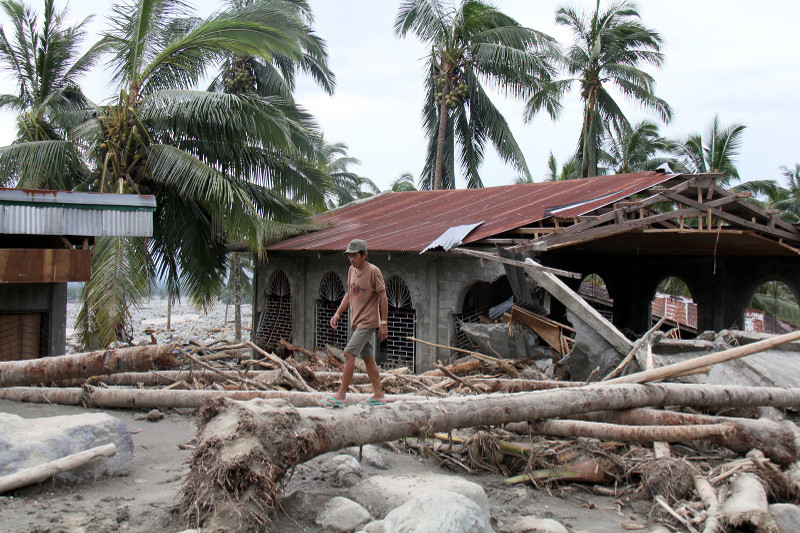 A mudslide wiped out the local Church after flooding from Typhoon Bopha, which also destroyed more than 100,000 homes in 2012. Photo by Jennifer Hardy/CRS
"I have been living here for 39 years and I never had any experience with typhoons, so we [didn't] know what kind of preparations or readiness they are talking about," he says.

"To be honest, we assumed Signal 3 is weak compared to Signal 1 because we thought it's the same with school honor: Top 1 is better than Top 3."

During the height of Bopha, Edwin recalls, he and his family left their house when its roof was tattered by the strong winds. Edwin's then 2-year-old son, Ronald, almost drowned.

"When we were evacuating, I held my two sons in my arms, but because of the strong current—and it was very dark—I lost balance and we fell down," he says. "I was able to grab them immediately but my youngest son got a broken leg because of that and we thought, 'he will never walk again.'"

The mayor, neighborhood captain and disaster risk reduction committee leader all say that Bopha was a lesson learned, not just for them, but for all Compostela Valley residents.

"After Bopha, many organizations—local and international—sent help," Harry says. "We are very thankful for all the help, especially during the first week where people did not have food to eat or clean water to drink. But after the response, we are thankful that CRS continued to serve us."

He showed one result of that help—a risk map that the community helped create and design.

"I am also thankful that CRS held training and workshops on disaster emergency and preparedness. I have learned a lot on what to do before, during and after disaster," he says. "Now I can say, 'we are ready.' We know how and what kind of preparations we need to do when a typhoon is coming. But we pray we won't have to apply it in the near future."

Pray and reflect with your community on our call to respond to the needs of our sisters and... END_OF_DOCUMENT_TOKEN_TO_BE_REPLACED

Reflect on the impact climate change has had on our planet and pray for the Holy Spirit to change... END_OF_DOCUMENT_TOKEN_TO_BE_REPLACED