When Typhoon Haiyan wiped out millions of homes last year, CRS decided against a cookie-cutter, single-design approach to building transitional shelter for those who lost their homes. Because of the many variables—urban and rural settings, varying levels of damage to homes, unclear land ownership, no-build zones that forced relocation—CRS engineers and staff had to think creatively about each neighborhood and family's unique situation. 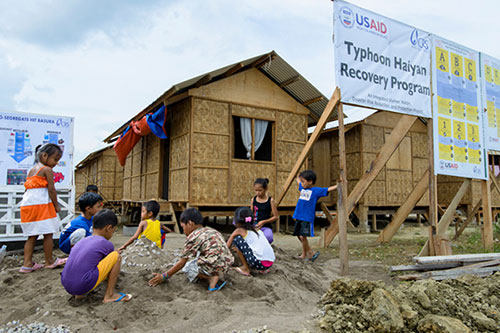 After Typhoon Haiyan devastated central Philippines on November 8, 2013, one of the ways CRS helped families and communities was with storm-resistant shelters. Those shelters survived this year's Typhoon Hagupit. Photo by Charlie David Martinez for CRS

CRS offered families two choices: a cash grant to rebuild their home or a home rebuilt by CRS. For some families, the grants to use their own design were the best option. For others, who had to rebuild on sites with particular challenges, CRS engineers helped create a design that met their needs and could be rebuilt safely on their land.

Can you describe what you saw in Tacloban and Palo immediately after Typhoon Hagupit passed over your home?

I didn't go too far from home that first day because Hagupit lingered until about 2 p.m. My own house flooded and had damage to the roof. Even though the storm made landfall as a category 3typhoon, I was afraid that the entire roof was going to blow off. The next morning when I went out to communities where CRS works, I couldn't believe it: My two-story cement house had roof damage, but none of the shelters CRS built after last year's Super Typhoon Haiyan had roof damage.

When you and your team reached CRS shelter sites in Palo, what did you see?

We've seen a lot of flooding in low-lying areas next to mountains. People living there think the flooding was worse because of high tide. The rivers were already high from the rain, and the high tide pushed water back up the river channel. In some cases the water would have reached as high as my neck, so about 5 feet of flooding.

As we drove to different communities on Monday, we observed very little damage to CRS shelters. The roofs and walls were intact. What damage we did observe was from flooding.

People receiving new shelters from CRS have to include certain construction elements like cement foundations, crossbeam bracing and roofing tie downs. What difference did those designs make?

CRS' shelter strategy - Build Back Better - includes a number of different elements and requirements, like bracing at cross joints and tying down roofing, intended to design homes that can withstand at least a category 2 typhoon. Typhoon Hagupit, which was downgraded from a super typhoon before it made landfall, was a good test for the designs. Although all of the design elements are important, our engineers report that proper bracing at cross joints and tying down roofing to prevent tin from crumpling or flying away in strong winds were the most critical.

Why did some of the homes flood?

In Palo, we've given families a choice between two designs we've used in previous disaster responses in the Philippines: a raised house and a house built on a concrete base. While we pushed strongly for families to select a raised-home design in areas prone to flooding, some wanted the design built on the ground because it offers the option for a cement floor.

This is a good point in our recovery project to make sure we're giving the best aid to families that we can. We've build 2,700 shelters, with 2,200 more under construction. That's the halfway point of our goal to build 10,000 homes in Palo. We know that the water table in Palo is high and that typhoons are annual, so we can expect that there will be some level of flooding each year. Typhoon Hagupit didn't even drop record-breaking rain on the area and we still saw a lot of flooding. At this point, we are talking with families who built a house with a cement floor on the ground to see how many of them experienced flooding. Although their homes are standing and safe, they have to clean up the water.

Our engineers make sure we offer the best housing option for each location, based on elevation, proximity to water and other factors.

How has Typhoon Hagupit affected your ongoing shelter work?

Right now we are doing detailed assessments of our shelters currently under construction. We need to see if any of the materials people ordered for their construction was destroyed and make arrangements for replacing those goods. Some families had just ordered sand and gravel to pour cement footings, for example, and those piles washed away.

Other families are at the stage of adding walls, and if the plywood was in a stack and got wet, it might be warped beyond use. So our teams are figuring out what would hold people back from completing their shelter, how many of those families are out there and what we can do to help them complete their homes. Our normal work will resume next week.

We're also doing hygiene assessments to make sure people know how to disinfect potentially contaminated water and understand what diseases can be found in flood waters. The Palo municipality has one of the highest rates of diseases caused by parasitic worms [schistosomiasis] in Asia, which is made worse by flooding. These worms enter through the skin and remain in the body for life, potentially causing severe damage to kidneys and the brain. This is a serious issue and the risk is greater for children as they play in and walk through water. We will do awareness raising campaigns around this issue in emergencies, specifically targeting diseases that can be contracted by walking through floodwaters.

How is your team doing after the storm? I know some of them experienced firsthand Typhoon Haiyan, the super typhoon that devastated Leyte last year. How are they doing after going through their first large hurricane after that disaster?

Our staff are doing well. We're all so inspired in Palo that our shelters are standing. In each place we've visited, there is a CRS house standing safe, and a house next to it (not CRS) that had major damage. People are really motivated by that now. We have clear proof that our typhoon-resilient building techniques work, and our teams of engineers and community outreach staff are energized seeing that their work directly leads to families having safe homes.

Read the latest update from CRS country programs and partners around the world as they respond to... END_OF_DOCUMENT_TOKEN_TO_BE_REPLACED

Read the latest two-page summary from CRS country programs and partners around the world as they... END_OF_DOCUMENT_TOKEN_TO_BE_REPLACED