CRS emergency relief activities are underway after Typhoon Hagupit struck the Philippines on Saturday, December 6. While the scale of damage across the country remains to be seen at this early stage, as many as 25 people have died, and fears loom of potential floods and landslides following the days of heavy rain.

CRS teams have been carrying out assessments in the affected areas of Samar, the island where the storm made landfall. The immediate needs include food, shelter materials, and water and sanitation. CRS teams are distributing some of the 2,000 kits that arrived in Borongan in eastern Samar. They will support the local Church's response to the most vulnerable people in the coming days and weeks.

In Samar's municipalities of Taft, Can-Avid and Dolores, 30% to 60% of homes—many built with light materials like bamboo and plywood—were damaged or destroyed. The storm's wind pulled the roofs from many houses. Many families need tarps and other materials to protect them from the elements. 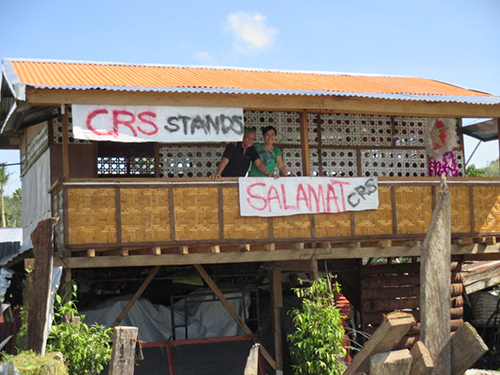 Esperanca and Benedicto Militante, Sr., residents of Palo, Leyte, are grateful their house withstood Typhoon Hagupit. CRS helped them build a storm-resistant home after last year's devastating Typhoon Haiyan. Photo by Charlie David Martinez for CRS
The good news for neighboring Leyte—an island that suffered catastrophic damage and where many perished in last year's Typhoon Haiyan—is that CRS transitional shelters withstood Typhoon Hagupit. Families who lost their homes in Haiyan and are now living in those shelters returned from evacuation centers after Hagupit to find their homes still standing.

"I was afraid that the entire roof was going to blow off," says Anna Hrybyk of her home in Palo, just south of Tacloban. Hrybyk is a CRS program manager working in the Philippines. "The next morning when I went out to communities where CRS works, I couldn't believe it: My two-story cement house had roof damage, but none of the shelters CRS built after last year's Super Typhoon Haiyan had roof damage."

Quality construction is essential for community resilience. The transitional shelters CRS is helping communities build as part of Typhoon Haiyan recovery are designed to resist heavy storms. The buildings use local materials, and the designs are adaptable to people's changing lives.

"CRS has taught us to build a stronger house," says Benedicto Militante, Sr., a resident of Palo who received support from CRS to rebuild his home, which was destroyed in the November 8, 2013, typhoon. 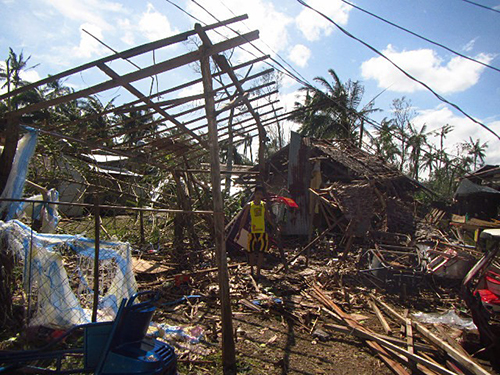 On the island of Samar, where Typhoon Hagupit made landfall on December 6, 2014, many houses made from light materials like nipa and bamboo suffered extensive damage, collapsed or had their roofs blown off. Photo by CRS staff.
"[A CRS] engineer visited us many times to tell us to install additional bracing and use bolts for the connections. Thanks to her recommendations, we have double walling and good-quality galvanized steel sheets on the roof. We did not think that this house would still stand after Typhoon Hagupit. But now we see that they were correct to do that because none of the CRS homes in our community were damaged at all. We knew that without CRS we would not have anything now," Benedicto says.

In Samar, however, the storm—downgraded from a super typhoon to a Category 3 storm by the time it made landfall—cut a swath of destruction through the central part of the island, including the remote town of Borongan. CRS has 120 permanent staff members in Samar who have been part of the Haiyan emergency recovery effort. They quickly responded to those affected by Typhoon Hagupit.

"We are in a good position to help," says Josh Kyller, CRS' coordinator of the typhoon response. "We also have strong connections with the local Church network.

In the hours before the typhoon, CRS teams helped evacuate some of the 1 million people who fled the coastal areas to higher ground, seeking shelter in churches, schools and designated evacuation centers.

Many attribute the low death toll to better preparedness and the experience of last year's typhoon, which killed more than 6,000 people. This time, more than 1.2 million people heeded evacuation warnings and got out of the storm's path before it made landfall.

CRS has worked in the Philippines for 50 years. We have a long-standing network of Filipino partners, primarily the local Catholic Church, and community relationships in the affected areas. Because of this, recovery efforts after last year's Typhoon Haiyan have seen remarkable progress in just the first year. More than 40,000 people have benefited from urgent relief assistance. The rebuilding of their homes, jobs and lives is well underway.

Read the latest update from CRS country programs and partners around the world as they respond to... END_OF_DOCUMENT_TOKEN_TO_BE_REPLACED

Read the latest two-page summary from CRS country programs and partners around the world as they... END_OF_DOCUMENT_TOKEN_TO_BE_REPLACED