If Cocoy Alon wanted to script his entry into early adulthood, he would have no trouble finding plot twists. Indeed, they found him.

His opening scene would be a traffic accident. Cocoy was first to respond. He offered what help he could. But he also wished he could have done more. He decided he would be a nurse.

Cocoy lives in a village in Mindanao, Philippines, where poverty and sporadic violence form the backdrop of daily life. It’s a reality that can easily overwhelm dreams of a better life. Cocoy encountered that reality upon graduating from high school. His parents informed him that they could not afford to pay for his college education.

“I still wanted to be a nurse, but after being out of school, I didn’t know if it was ever going to happen,” says Cocoy.

The gun was a gift from his father, a means of protection in a dangerous world.

“I used to carry it around with me because I felt safe that way,” says Cocoy.

Rather than carrying books around a college campus, preparing for a medical career, Cocoy carried his gun and prepared for encounters with armed groups that sometimes roamed through villages and terrorized neighborhoods for reasons not clear to Cocoy. The marauders were simply a fact of life.

So Cocoy detoured from the healing arts to join a makeshift militia.

At this point, in Mindanao, there is nothing exceptional about Cocoy’s story. Despite the decades-long economic growth, the Mindanao region still faces enormous development challenges. Most young men of Cocoy’s age follow the same plot. 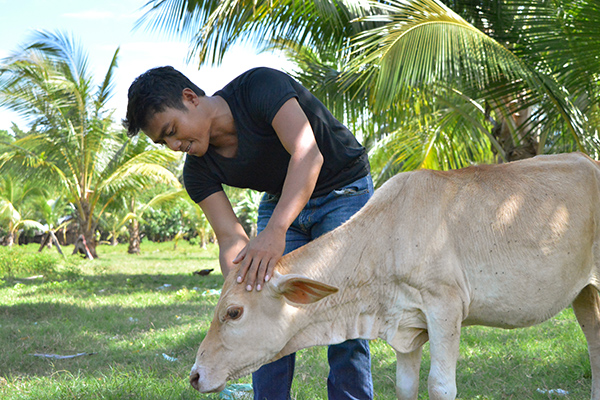 Cocoy Alon went from street life to a CRS project that introduced him to community theater and inspired a life-changing attitude. Photo by Ma. April dela Cruz/CRS

Consequence of conflict in Cocoy’s life

Many young people like Cocoy face armed conflict, frequent displacement, abuse and exploitation, and lack of healthcare and basic social services. In attempting to survive day to day, they can easily become what they claim to be fighting against.

“I cannot actually count how many times I used the gun or if I hit someone with that gun,” says Cocoy. “At first I participated because my father said so. Later, I joined because I wanted to protect our community. I wanted the community to see me as their protector.”

From gun to pen

Then, in April of this year, just after his 23rd birthday, Cocoy was invited to attend a Catholic Relief Services’ workshop in Davao City.

With funding from Caritas Norge through the Peace Governance in Mindanao project, CRS organized a series of community theater workshops in three municipalities in Mindanao. The goal: develop the creative skills of youth in community theater and prepare them to produce a play that would depict the conflict resolution system in their villages.

In communities like Cocoy’s, local theater remains a powerful tool for public information and increases awareness of village processes, including conflict resolution systems.

“Our village captain asked me to join the workshop and asked me to invite my friends to come with me. They paid for all of our expenses, so we went,” says Cocoy.

“We attended a series of workshop in a week. There were mentors on scriptwriting, acting, singing. But more than the learnings, I got inspired,” says Cocoy.

After the workshop, Cocoy, together with his friends, founded an informal youth organization in their community called Talapas Youth Organization, or TAYO. They have six members. They’ve already produced three plays.

“After the training and workshops, we were so inspired to come up with our first play. It dawned on me that we can solve conflict not just through firearms. I realized, there are other options.”

Cocoy and his friends consulted their village council and asked for their support in scheduling and inviting people to watch. Led by Cocoy, TAYO performed their first-ever community theater play during the last week of April 2018.

“We were all shy at first. But when we held our first play about ways to resolve boundary conflict, people gathered and watched. I was nervous, but I saw them smiling, laughing and nodding during our performance. I felt proud and accomplished,” says Cocoy.

After their first play, Cocoy and his friends held two more plays—one on resolving land conflicts and another about flood response.

From acting to leading

After three plays, Cocoy’s popularity rose. He was asked to run for youth council chairman in a local election.

And he won. Cocoy has been the chairman of his village youth council since June 2018.

“After the workshop, I know I changed a lot. I never thought I would like writing scripts and performing in front of our community,” says Cocoy.

In his three months of being the chairman of Talapas Youth Council, Cocoy did his best to become a model youth citizen. Instead of hanging out, he now helps at his father’s farm, taking care of their cows and goats.

“Personally, after the workshop, my life has completely turned around. I am now inspired to work harder and to help our community in other ways I know aside from joining the armed groups. I became more responsible,” says Cocoy.

Cocoy is now developing the script for their fourth play with his TAYO co-members.

“We want to continue the community theater even though the project has ended. The community likes it and some youth asked us how they can join. Hearing this and the feedback from the other members of the community, gave me a sense of purpose. I think this can be my legacy as the youth council chairman in Talapas.”

A prayer asking God to help us recognize family in each of His children, to know them as brothers... END_OF_DOCUMENT_TOKEN_TO_BE_REPLACED