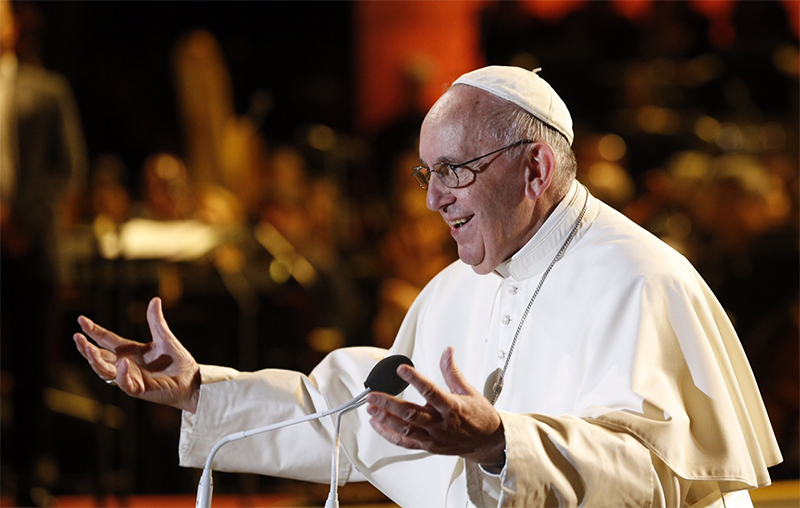 Pope Francis, speaking at the World Meeting of Families last September, reminds us to care for not only our own loved ones, but also our vulnerable brothers and sisters around the world. Photo courtesy of Paul Haring/CNS
Twitter msg

On his native continent, he’s known affectionately as “Papa.” He may be the most popular father figure on the planet. Since his election, Pope Francis has turned heads and opened hearts in and outside the Catholic Church.

His admirers span generations. He shuns luxury and models solidarity with the poor. While he refuses to judge, he just as adamantly rejects social and political apathy.

At a time when people have been displaced from their homes in record-breaking numbers, and millions are sojourning to unfamiliar places and uncertain futures, Pope Francis calls for mercy and hospitality.

And as millions more face hunger after years of unfavorable climate change and further devastation from El Nino, he brings clarity and fresh perspective to environmental concerns. He reminds us that we care for the Earth because we care about the poor.

Pope Francis faithfully proves the Gospel message is as fresh and relevant to the day’s headlines as it is foundational to human history.

In celebrating Father’s Day this month, we pray that fathers everywhere are encouraged and challenged by the quiet strength and humility of Pope Francis. May we all be renewed by the leadership of this Holy Father.

Read the latest update from CRS country programs and partners around the world as they respond to... END_OF_DOCUMENT_TOKEN_TO_BE_REPLACED

Read the latest two-page summary from CRS country programs and partners around the world as they... END_OF_DOCUMENT_TOKEN_TO_BE_REPLACED