Inez Ramirez scrambles to the top of the hill overlooking his farm and stops. He takes off his sweat-stained straw hat, wipes his brow with the back of his hand and looks at what's left of his coffee plants. 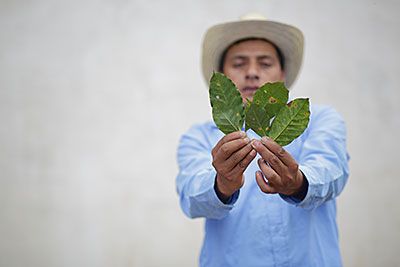 His half of an acre in Guatemala's eastern highlands is about the same modest size as the rest of the country's poor farmers. And Ramirez, like his father before him, has always been poor. But at least the money he earns from selling his coffee—most recently to Vermont-based distributor Green Mountain Coffee Roasters, Inc.—is enough for his family to get by.

Until last year, that is, when coffee leaf rust, a fungus that covers coffee tree leaves in an orange-yellow dust, ravaged farms across Central America. Only a third of Inez's plants survived the infection. What's left is a graveyard of coffee trees hacked off at boot level.

He sighs and shrugs.

"Next year I'll be begging to get by," he says, only half joking.

Coffee leaf rust settles in the pores, or stomata, of the underside of coffee leaves. Once a plant is infected with rust, its leaves shrivel and fall off. Meanwhile, the coffee cherries, which contain the seeds that are later roasted and ground into coffee, don't mature.

The fungus wiped out about 20% of this year's crop in Central America, costing an estimated 337,000 jobs. Coffee-growing families lost $460 million in income. 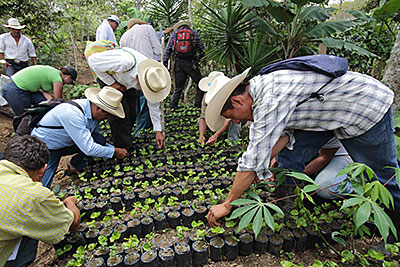 Workers inspect a seedbed for signs of the leaf-rust fungus. Photo by Silverlight for CRS
Most are families like Inez's, with monthly incomes of about $200. His production dropped by 70% from the previous harvest, he says, costing him about $1,100—the equivalent of 6 months' income.

Inez's younger brother, Lucio, is in the same boat. Leaf rust cut his production in half, earning the father of three about $750 for the year's harvest.

As bad as the situation is, it's bound to get worse—up to three times worse. Catholic Relief Services surveyed farmer organizations throughout Central America, which produces some of the world's finest coffees, to better grasp the problem. One farmer in El Salvador says the "crisis is in 2014."

"That's because plants affected by leaf rust this year are only now starting to grow back," says Dan McQuillan, an agriculture specialist for CRS in Guatemala. "Those plants won't be able to mature many berries. And I'm already noticing that leaf rust is affecting those same weakened plants, which many people didn't expect."

"This year was only the beginning," says Lucio. "The coffee still had beans but they dried. Next year [2014], it will be even worse."

If his predictions hold true, lean seasons, the time between harvests when farm families often go hungry, will be longer throughout the region, and seasonal work will fall by up to 40%. 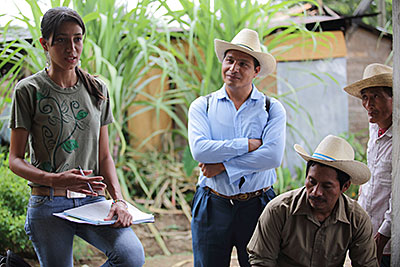 Iris Santos, a technician for Guatemala's coffee association, talks with farmers about how to manage leaf rust. Photo by Silverlight for CRS
Unfortunately, much of the region's coffee may be beyond the quick fix of fungicides, although the governments of Costa Rica, Guatemala and Honduras have already allocated funds to treat plants that have only been lightly affected. Young coffee that has been more severely affected by coffee rust, however, will require a radical pruning process that cuts coffee plants off at the stump. And extremely damaged, older plants will need to be replaced with new seedlings.

Lucio scraped together enough money to buy a couple of pounds of fungus-resistant seeds to replace the plants he lost. They're known to produce a more acidic bean than the seeds he typically plants, though, and he worries about the quality of the coffee they'll yield. Plus, it will take a few years for the new plants to start producing. He and Inez say that, in the meantime, they will just have to start growing more corn and beans, the mainstay of the Guatemalan diet.

The situation demonstrates how farmers in Guatemala overly depend on coffee as a single crop. That's why CRS is helping farmers like Inez to expand their moneymaking opportunities. In partnership with Green Mountain Coffee Roasters, Inc., CRS is helping Inez and his family learn how to keep bees for honey production, cultivate vegetables in household gardens, raise tilapia and tend laying hens—all as part of an integrated approach to farmers' livelihoods.

CRS is also working with coffee farmers to better manage their coffee fields through smart soil management practices, such as use of organic fertilizer, more effective pruning techniques and the responsible application of fungicides. 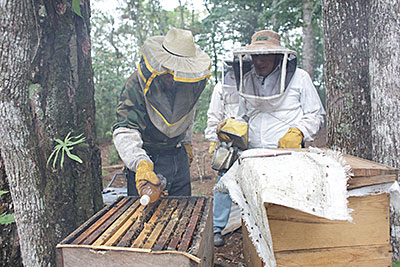 Beekeeping provides income when coffee crops are lost due to leaf rust. Photo by Silverlight for CRS
"The combination of defenses is the best way to help farmers weather the current storm, while, at the same time, preparing themselves for a more prosperous and resilient future," says McQuillan.

Inez applied a couple of doses of fungicide last year. But he did too little, too late. He realized his mistake when Iris Santos, a technician with Anacafé, Guatemala's coffee association, visited the community for the first time since the outbreak.

During a daylong workshop in June facilitated by CRS, Santos showed farmers how to plant seedlings and prune plants, and discussed the proper timing for use of fungicide.

"If they can get to the harvest with 35% of the leaves intact, they should be all right," she says. "That's the goal so that they will have a future."

Inez and Lucio attended the workshop. They learned a few strategies for staving off leaf rust, but their futures are far from certain.

The bees the family is keeping are finally starting to produce, and they're excited about that. They figure they can sell a gallon of honey for about $18. They're building a chicken coop, too, and hope to start raising hens soon.

Luckily, the Ramirez family is big—six brothers, including Inez and Lucio, live in houses huddled around their parents' home—and they take care of one another.

Use this calendar for key dates to reflect and take action with your community to address climate... END_OF_DOCUMENT_TOKEN_TO_BE_REPLACED