Life is a struggle for many people in Lesotho, an isolated mountain kingdom the size of Belgium surrounded by much wealthier South Africa. It is one of the world’s least developed countries. But small changes, like better food, can make a substantial difference. 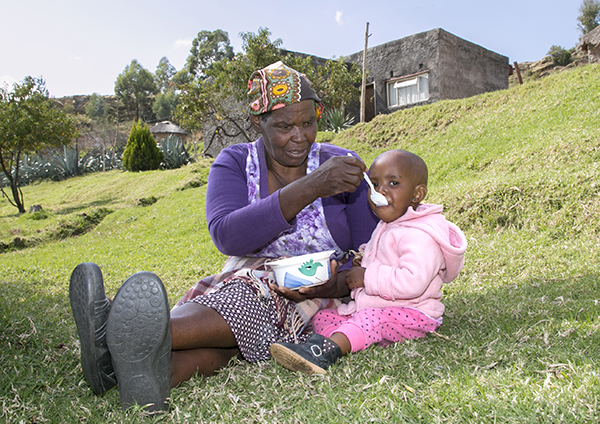 That’s the impetus behind the Catholic Relief Services program SPRINGS—Sustainable Poverty Reduction through Income, Nutrition and Access to Government Services. The program aims to strengthen the safety net so the poor can do more than survive: They can begin to break the cycle of poverty.

The solutions might seem small—a garden, a savings group, a cooking class—but their impact can affect generations in Lesotho, where more than half the population survives on less than $1 a day.

Claudia Maphafa Kaibane lives in a village called Ha Moruthoane in the foothills of the Maloti Mountains, which rise steadily west across the kingdom. With a group of other mothers, grandmothers and caregivers, she participates in SPRINGS.

She looks after her granddaughter—2-year-old Manketsi—while Manketsi’s mother is away. Claudia’s daughter lives and works a few hours away in the capital of Maseru, in one of the many garment factories there. The job requires her to work 6 days a week. Manketsi’s father is a bus driver in Maseru.

“Taking care of Manketsi is a full-time job,” Claudia says. Although one of the oldest caregivers in SPRINGS, Claudia is certainly not the only one caring for grandchildren while their parents are away working. The garment factories are a main source of jobs in Lesotho, especially for women.

“I look around and I can see people are raising their children differently from what I did when I had my own children,” Claudia says. “And so I thought I needed to learn, so I can take better care of my grandchildren.”

A main strategy of SPRINGS is creating keyhole gardens to improve families’ nutrition. The keyhole, a raised stone enclosure, looks like a well. But instead of water, it holds a garden with a variety of vegetables. Having this source of food saves families money and improves nutrition, which benefits children’s health.

“When my children were small, we’d feed them a mixture of maize flour and water,” Claudia says, a staple food common in many countries across southern Africa.

But there is so little nutritional value in cornmeal porridge that even when children’s bellies are full, they can suffer malnutrition that affects their cognitive and physical development, hampering their learning and job prospects for the rest of their lives.

“Now I add vegetables from my garden, or I buy eggs or beans to add to the porridge. We’ve been learning how to make more nutritious meals through the cooking classes,” Claudia says. 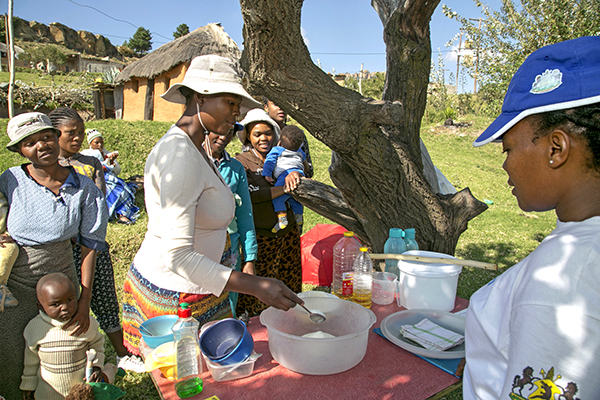 Mothers and other caregivers participate in a cooking class focused on child nutrition. Photo by Nancy McNally/CRS

The twice-yearly cooking classes—Community-led Complementary Feeding and Learning Sessions—are a CRS version of a cooking show, performed live at the village level. They teach mothers, grandmothers and other caregivers about nutrition—especially preparing healthy meals for small children. They also emphasize the benefits of breastfeeding and the importance of hygiene to prevent food-borne and other illnesses in this drought-prone region with limited access to clean water.

The women also learn that interacting with their babies helps their children’s development.

Next up for Claudia is a microsavings group called SILC, or Savings and Internal Lending Community. Members pool their savings, however small. They can also take out loans to build small businesses so they can begin climbing the economic ladder.

Claudia says that initially she didn’t want to join her community’s SILC: The idea of having to pay interest on loans frightened her. But now that she has seen other women benefit, she wants to become involved.

She says that she would like to grow peaches or, perhaps, raise pigs—but pigs would require a bigger startup investment.

“I love SILC, and I cannot wait to join,” Claudia says.

There are other signs of progress in Lesotho as well. Although it has the second-highest rate of HIV infection in the world —about 1 in 4 adults in Lesotho has the virus—more people are seeking treatment. Still, the disease has left many children orphans.

Children are the focus of CRS programs like SPRINGS that help provide a nurturing environment, so boys and girls—and Lesotho—can reach their full potential.

August recess is a key moment to meet with your members of Congress while they are out of session... END_OF_DOCUMENT_TOKEN_TO_BE_REPLACED

Use this calendar for key dates to reflect and take action with your community to address climate... END_OF_DOCUMENT_TOKEN_TO_BE_REPLACED