Ayuba Ahmed's kitchen has undergone a complete remodel. Her husband, Temame, a brick maker, rebuilt the round mud walls to include four shelves for teacups and ingredients. With comfort in mind, Temame added a nook to lay a mattress so the family can rest while they wait for Ayuba's mouth-watering sauces to simmer. He also fashioned a mud stool built into the ground for Ayuba to sit on while she cooks. But the newest addition to Ayuba's kitchen, one that has the neighbors stopping by to admire and save for, is her stove.

Traditionally, women in the village of Dodota Alem use three stones and firewood to prepare meals. The open flames blow smoke in their eyes and singe their clothing. Between collecting firewood, stirring sauces and flipping large d 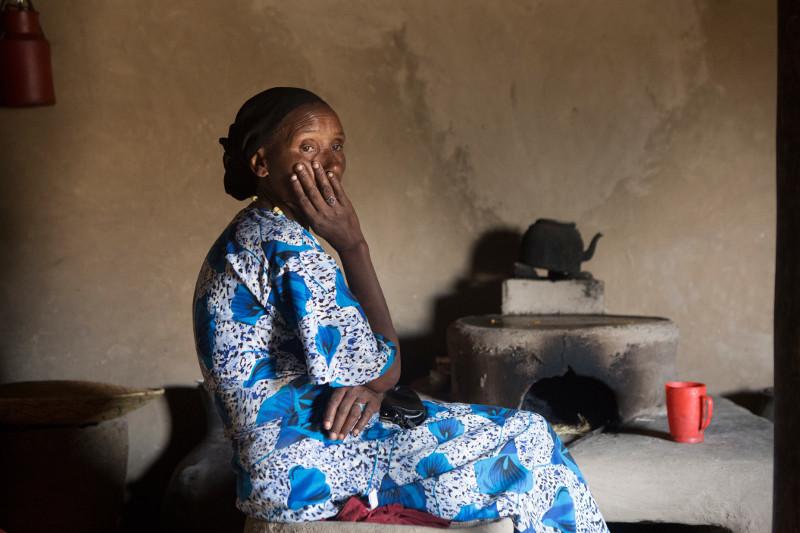 Ayuba Ahmed sits next to the fuel-efficient stove that helps her save 6 hours a day—time once dedicated to collecting firewood and preparing food. Photo by Sara A. Fajardo/CRS
isks of "injera," a thin fermented bread made of a local grain called "teff," preparing family meals in Ethiopia can take women up to 8 hours a day. Ayuba's new stove, however, cut that time down to 2.

The two-tiered stove has a large metal disk for injera preparation and a second tier for a teakettle or cooking pot, allowing women to prepare several dishes at once rather than using separate fires for each pot. A small opening, similar to the mouth of a brick pizza oven, is just large enough to add twigs and hay to feed a fire, but small enough to contain heat and smoke.

"With an open stove, if I started baking at 5 a.m. I was finished by 9 a.m.," Ayuba says. "Now I start at 5 a.m. and I'm done by 7 a.m. The stove is hotter and the top helps to contain the heat. I once took 4 hours a day to find fuel, but now when I clean my garden I'm collecting fuel. I can use leftover animal feed and broken twigs. I save up to 6 hours a day of work with this stove."

'We aspire for hope' 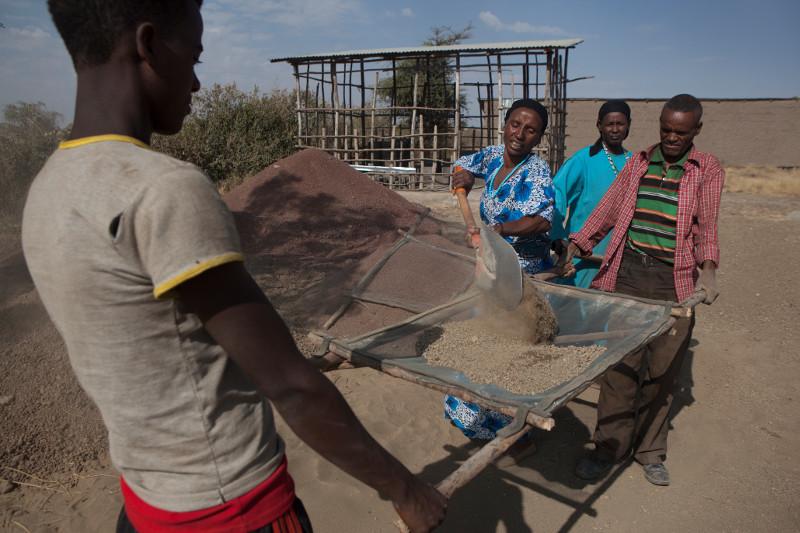 Ayuba Ahmed shovels ash while other members of her stove-making group sift. The 12-member group manufactured and sold 458 stoves in its first year and increased their household incomes by an average of 6%. Photo by Sara A. Fajardo/CRS
Ayuba wasn't always so convinced that the stove would work. When Catholic Relief Services and our partner, the Ethiopian Catholic Church-Social and Development Coordinating Office of Meki-Wonji Branch, first introduced the idea, Ayuba was skeptical. "I didn't believe them when they told us about the time we'd save with these stoves," Ayuba says. "Why would we produce stoves if a woman can make a stove with a stone? It seemed like they were just coming to make more work for us."

With a bit of training and a loan for start-up materials through the U. S. Agency for International Development's Food for Peace program, Ayuba and 11 friends decided to take the risk and started the Hawi Gudina "We Aspire for Hope" Fuel Saving Stove Producer Group. Hawi Gudina meets three times a week during the dry season when group members are not tending their fields.

collecting fuel. I can use leftover animal feed and broken twigs. I save up to 6 hours a day of work with this stove."

From ashes to food security

Two men hold a large mesh sifter as Ayuba shovels red ash onto the screen. The men jostle the sifter back and forth, shaking loose a thin wisp of fine red ash to the ground below. The red ash is later mixed with sand, cement, gray ash and water. Workers mold the mixture into the six pieces required to make the stove.

In its first year, Hawi Gudina sold 458 stoves at approximately $5 apiece. Forty percent of those earnings are now in savings for raw materials and future business enterprises. The rest has been distributed to group members based on their participation. Ayuba earned $40 in profits—a 6% increase to her family's annual income—and used it to purchase fertilizer. "In the past we didn't buy fertilizer or we would rent some of our land to purchase it," Ayuba says. "With the fertilizer, our crop production has increased. We used to produce only 1,320 pounds of barley from 1¼ acres of land and now we've produced 2,200 pounds." 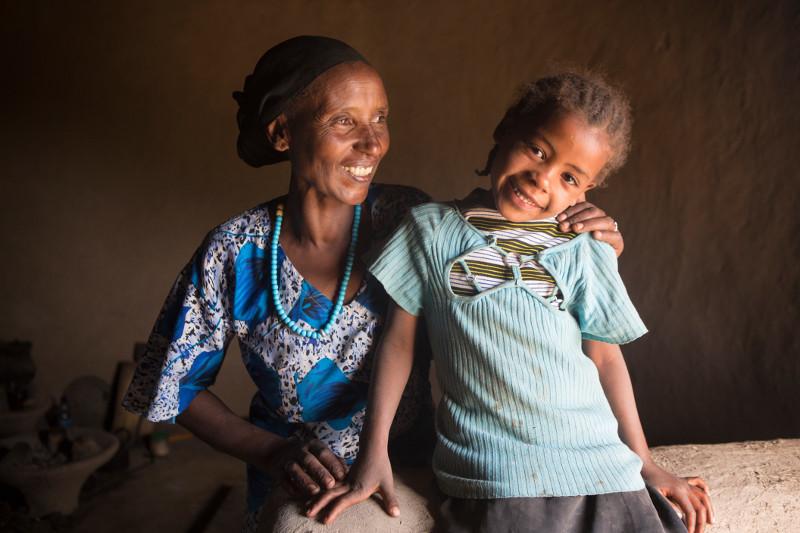 Ayuba in her kitchen with the youngest of her five children, Asia. Thanks to her new stove, Ayuba has more time to spend with her children. Photo by Sara A. Fajardo/CRS
For Ayuba the biggest benefit of the stove, however, is the time she saves. "When I first used the stove, I didn't believe I'd have time to do other things," Ayuba says. "But then I realized I did indeed have time for things like basket weaving, gardening and washing clothes. Before, baking injera made me so tired I had little energy to do anything else."

Ayuba is also pleased at how new her clothes look because they aren't covered in ash or burn holes. She has also saved quite a bit on the injera covers she uses to protect her freshly baked bread. "On the old stoves, our injera covers would burn," Ayuba says, "I used to have to buy a new cover every week or two for [75 cents]. With my new stove, I've used the same one for an entire year."

Once Ayuba's neighbors saw her stove, the word spread. Ayuba's sister-in-law was the second person in their village to get one. Her sister was the third. People now purchase stoves for special occasions like weddings and other celebrations. House-by-house, the entire village of Dodota Alem has begun the process of saving time and money by updating their kitchens.

August recess is a key moment to meet with your members of Congress while they are out of session... END_OF_DOCUMENT_TOKEN_TO_BE_REPLACED

Use this calendar for key dates to reflect and take action with your community to address climate... END_OF_DOCUMENT_TOKEN_TO_BE_REPLACED