Photo by Karin Bridger for CRS.

It is a bright sunny day and 14-year-old David Byaruhanga is playing football with his friends at Karuhinda Primary School in the Kyangwali Refugee Settlement in western Uganda.

At the moment, classes are not in session because of a government-ordered closure as a result of the COVID-19 pandemic. But David is eager to go back to school to continue learning.

“I miss school,” says David. “I love to learn and write while at school.”

David joined Karuhinda Primary School in February 2020, when it opened. Previously, he and his friends had to walk more than 30 minutes to get to their other school. With the new school, there are no more long hikes and class sizes have been reduced significantly. 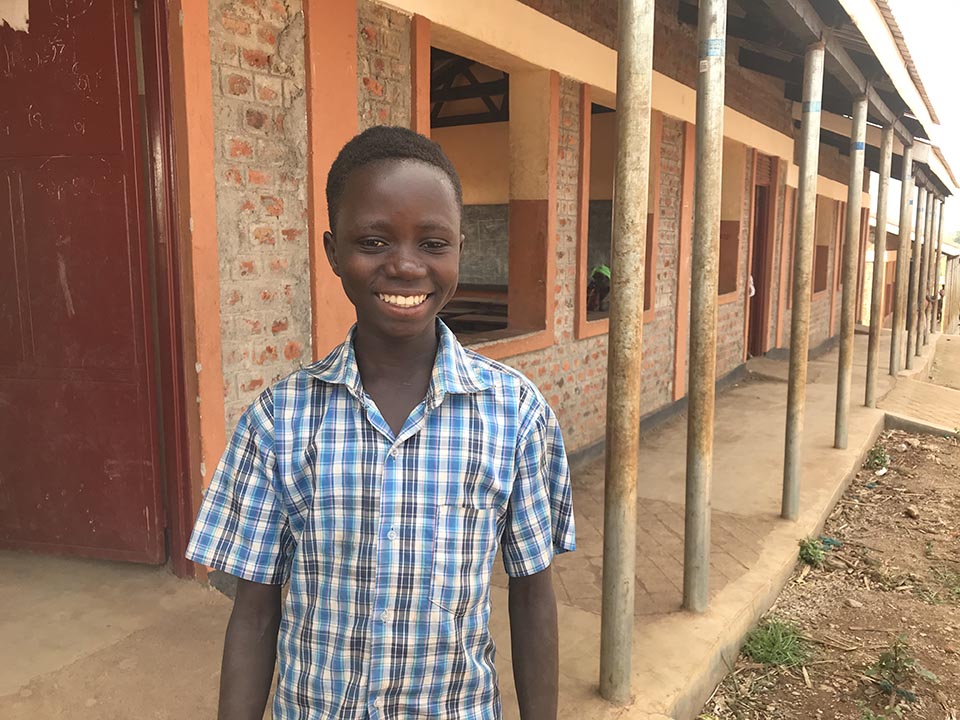 David Byaruhanga at his new school constructed by Catholic Relief Services with funding from Latter-day Saint Charities, in the Kyangwali Refugee Settlement in western Uganda.

“My new school is good because it is near home. I go home for lunch every day and I don’t stay hungry while at school anymore,” David says.

According to Okeny Dominic, a teacher at the school, overcrowding hampers students’ learning.

“Pupils are learning but not to the desired expectation. But we ensure that at least they are learning something. We gather them in groups of 10 during lessons so that each can learn something,” Okeny says.

To reduce classroom congestion and improve learning conditions, CRS has undertaken the construction of an additional nine classrooms, 12 washrooms, a rainwater harvesting tank and hand-washing facilities that can be used by the refugee and host communities in and around the settlement.

The construction, funded by the Latter-day Saint Charities, aims to expand the recently completed and commissioned Maratatu B/Kiruhinda Primary school. When classes resume following the closure prompted by COVID-19, the school will have a total of 18 classrooms. This will reduce classroom congestion by half, so that one classroom will have approximately 294 pupils.

As much as the additional classroom blocks will reduce overcrowding, it is still far above the government of Uganda’s recommendation of a maximum of 54 pupils per classroom. With large classes sizes, teachers still cannot guarantee that all pupils learn to the best of their abilities. 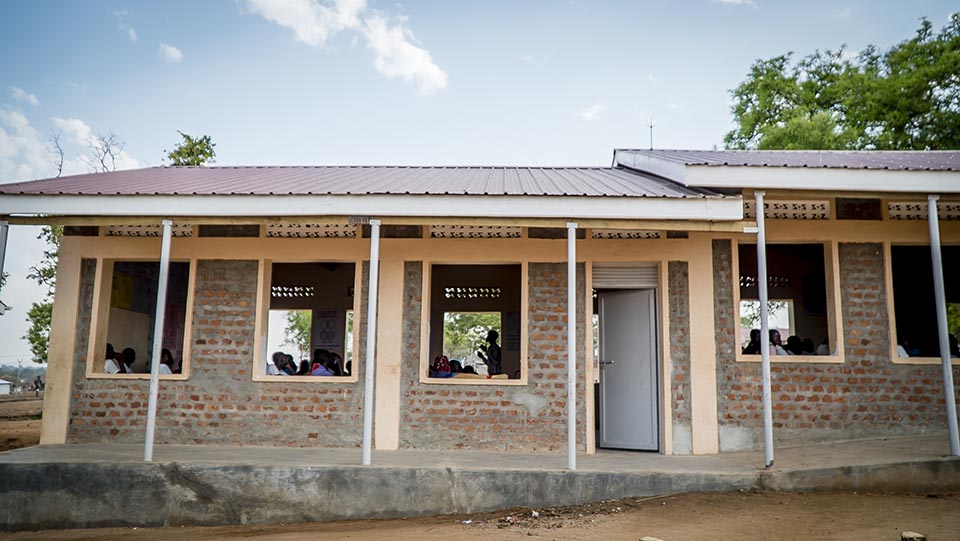 CRS has built schools in Bidibidi and Kyangwali Refugee Settlement to improve the children's education.

Photo by Karin Bridger for CRS.

“This new extension will try to reduce the congestion, but it will still not be enough,” says Okeny. He says an additional 18 classrooms would mean that each classroom could accommodate just 147 pupils–a number that could better be managed by teachers.

“To ensure proper learning for the pupils we need at least an additional 18 classrooms for the learners,” says Okeny.

Kyangwali Refugee Settlement was established in the 1960s to accommodate Rwandan refugees fleeing to Uganda. Since 1994, the settlement has hosted mostly Congolese refugees. In December 2017, ongoing and intensifying conflict in the Democratic Republic of Congo prompted a new influx of refugees, doubling Kyangwali's population from 37,000 in December 2017 to over 118,000 by January 2020. This number continues to increase as Congolese flee continued insecurity from tribal conflicts and disease outbreaks.

The rapid growth of the refugee population has put a heavy strain on existing services and infrastructure within the settlement. Approximately 65% of refugees are young people under the age of 18, whose education has been interrupted due to ongoing conflict and forced migration.

With the additional classrooms, parents, teachers and the school management committee are all happy that the school is expanding to accommodate their children.

“I brought my children to Karuhinda Primary because it is near home. I can easily check on them to see if they are fine,” says Evalet Kizayi, a parent with three children at the school.

August recess is a key moment to meet with your members of Congress while they are out of session... END_OF_DOCUMENT_TOKEN_TO_BE_REPLACED

Watch videos on the issues of hunger and climate change here. END_OF_DOCUMENT_TOKEN_TO_BE_REPLACED