Nepal Relief Amid Loss and Grief

The day a 7.8-magnitude earthquake roiled the mountains of Nepal, the Rana family was spread out. Bhuban Rana, a soldier for the Nepalese army, was at his rented apartment in Kathmandu. His wife, Prem Kumari Rana, sat nursing their 2-month-old daughter, Bhumika, in the open outdoor area of their compound. Their older daughter, Bhwana, 5, ran circles around the courtyard.

A 6-hour bus ride away, in the remote village of Taple, in Gorkha district, Bhuban's mother, Modh Maya Rana, 71, was going about her daily chores while his father, Bal Bahadur Rana, 75, rested. 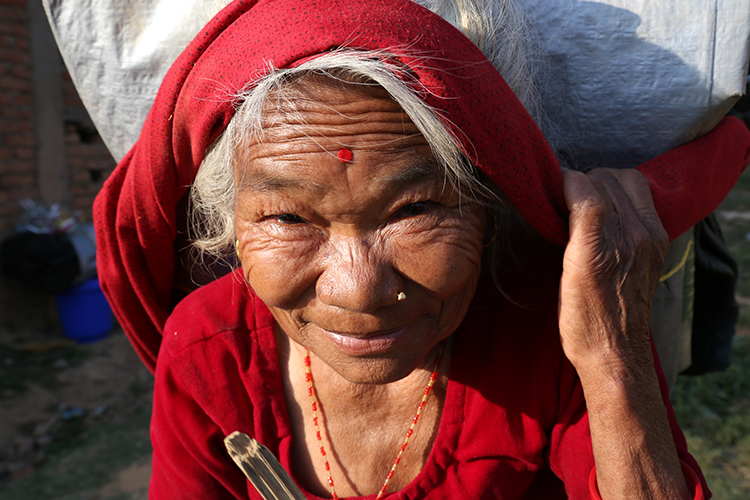 Modh Maya Rana, 71, lost her 5-year-old granddaughter in the earthquake. She and her family received emergency items such as tarps, blankets and hygiene supplies. Photo by Jennifer Hardy/CRS
Then the earthquake hit, and the world stopped for the Ranas, as it did for hundreds of thousands in Nepal. Modh yelled for her husband to run from the home they had cherished for decades. Crouching amid young corn plants, they turned back and saw their second floor collapse into the first. In Kathmandu, Prem screamed as she watched the courtyard wall collapse on Bhwana.

I don't know who exactly pulled her out, but as soon as we had her, we ran," Prem says. "We ran so fast to the hospital, but it didn't matter how fast we ran. The doctor said she was dead when he saw her."

But Bhuban could not descend into grief. "I was facing three crises at once," he says. "My daughter died. I did not know the conditions of my parents' home or my wife's grief. And I had to work long hours with the military for search and rescue. I could not care for my own family."

He sent his wife and baby daughter to his parents' home.

When their bus arrived in Taple, they were greeted by a collapsed home set against Manaslu mountain, one of the world's highest. Prem's father-in-law, Bal, quickly cobbled together a makeshift shelter with tin from their home, and he repaired a bed they pulled from the rubble so Prem and the baby could be off of the damp ground. Bal could not stop the rain that crept through cracks in the tin no matter how he shifted it, nor the wind cresting the hillside behind their home, which shook the metal loose each night.

Bal sighed. "It's been difficult to sleep each night," he says. "With the worry, noise, rain, mosquitoes and snakes, I am awake almost all night. I rest in the day when it's more comfortable." 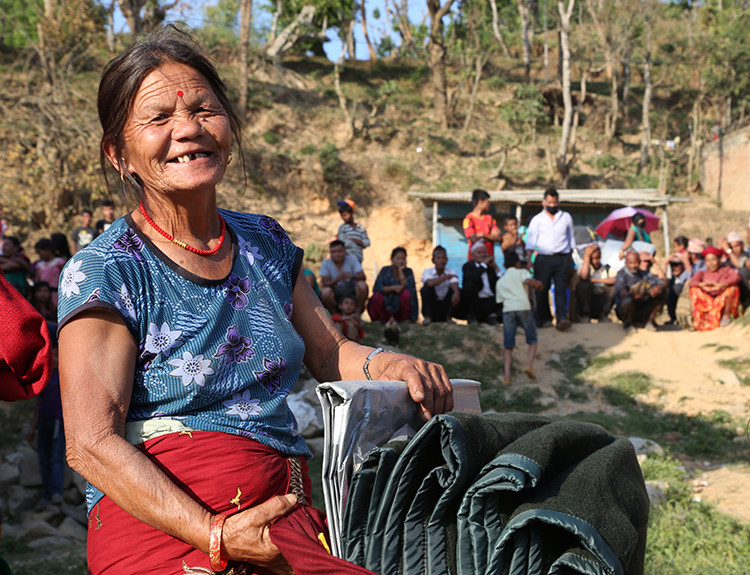 Kanchi Rama ties a tarp, blankets and sleeping mats together to carry to the ruins of her home in Gorkha district. Photo by Jennifer Hardy/CRS
Across Nepal, families like the Ranas are trying to cope with difficult living conditions and uncertainty, following the strongest earthquake to hit Nepal in 80 years. People in remote villages were hit especially hard, and Catholic Relief Services, with our partner Caritas Nepal, is reaching some of these distant places with emergency relief that families desperately need. Supplies such as tarps, sleeping mats and blankets make sleeping a little more comfortable. Others items— soap, sanitary cloth, diaper cloth and water treatment tablets—help with hygiene and sanitation.

Modh and Bal were among 2,000 people served in 1 day by a CRS distribution. While waiting in line, Modh says, "I'm not worried that I will receive my goods at the end of the day. This line seems orderly and I've already been registered. Now I need to wait with this card."

The card includes a QR code that increases the efficiency of distributions.

When Modh and Bal received their kit, they tied the large items into a bundle and lifted it onto Modh's back for the walk home. Bal carried the bucket with hygiene items in one hand and balanced with his walking stick in the other. Later that night, Bhuban arrived on a bus from Kathmandu. He had been granted 10 days leave from the military. The morning after the CRS distribution, Bhuban laid out his plans for the coming days.

"I'm going to help my parents make a better shelter with this tarp," he says. "My wife and baby will stay here with them for some time, and I want them all to be as comfortable as possible when I have to return to work."

Bal is already strategizing next steps. "When the shelter is better I will begin to repair that bed," he says, gesturing to the smashed remnants of a twin-size frame. "Then we will have two beds. It's one thing I can do now to make our lives more comfortable. I hope my son doesn't worry so much about us. We will be fine over time. These will be difficult days, especially with the monsoon season starting next month. For today, I will repair the bed. Tomorrow, I will repair something else."

CRS has committed at least $10 million to a 3-year program of relief and recovery in Nepal. We'll continue to work with Caritas supporting families like the Ranas during the coming monsoon season and beyond, as they rebuild their homes, recover their lives, and look to the future with certainty again.

Read the latest update from CRS country programs and partners around the world as they respond to... END_OF_DOCUMENT_TOKEN_TO_BE_REPLACED

Read the latest two-page summary from CRS country programs and partners around the world as they... END_OF_DOCUMENT_TOKEN_TO_BE_REPLACED