Thousands of Rohingya* who have fled to Bangladesh to escape violence in Myanmar are receiving help from Catholic Relief Services through support to our partner, Caritas Bangladesh. 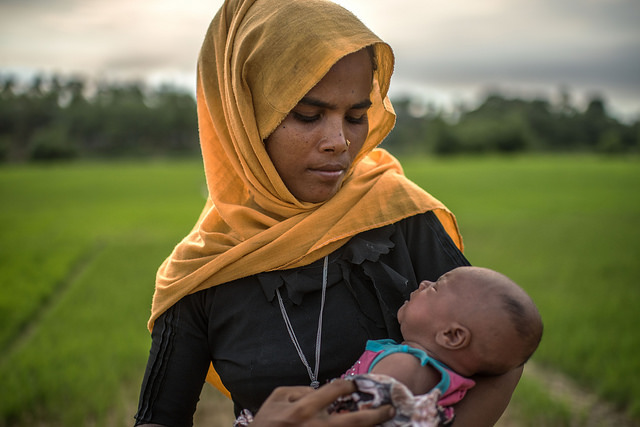 Rajida Begum holds her still-unnamed 14-day-old baby, who was born in a rice paddy as Begum fled the Burmese army. Photo courtesy of Caritas Bangladesh

The refugees, many escaping violence in Myanmar’s Rakhine State, are arriving at a rate of 20,000 a day on foot and in boats. They are in desperate condition. It is estimated that more than 400,000 have fled since violence erupted 3 weeks ago, joining hundreds of thousands of Rohingya already in Bangladesh.

“For 4 days, I hid myself in the forest. Then, we tried to walk to the border. I was so scared,” says Rajida Begum, a 30-year-old mother who fled her village with neighbors when she was 9 months pregnant. She gave birth to a baby girl under a piece of plastic sheeting in the middle of a rice paddy 5 days after arriving in Bangladesh. As she cradled her newborn baby, she looked relieved: “When I saw that she was healthy, I was so happy. I gave thanks to God.”

Overflowing existing refugee camps, many of the new arrivals are living in makeshift shelters—tents made of bamboo and plastic constructed along roadways or on hillsides. Others are living with the Rohingya families who were already in Bangladesh. 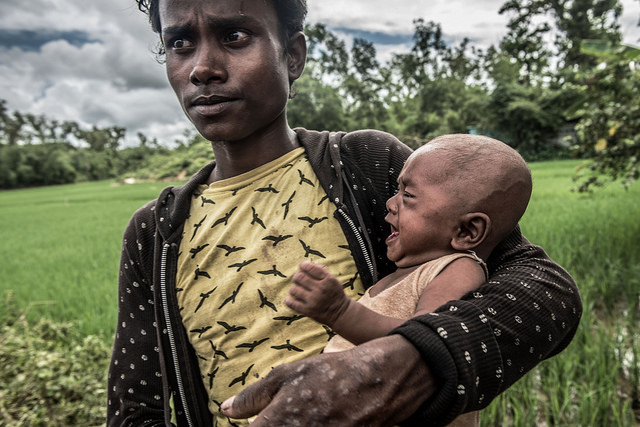 Abdul Rahman cares for his four month old daughter Sangida, after her mother was shot dead by Burmese soldiers while trying to flee to Bangladesh. Photo courtesy Caritas Bangladesh

“Most of the new arrivals are in dire need of food, water and shelter,” says Deepti Pant, CRS country manager in Bangladesh. “Few have any resources, having spent all their savings traveling across the border and meeting some of their basic needs along the way.”

The aid that CRS and Caritas Bangladesh are providing includes a 2-week supply of food—rice, lentils, sugar, salt and vegetable oil—as well as cooking equipment and other household items for 5,300 displaced families, reaching a total of more than 26,000 people. Caritas is coordinating with the local government as well as U.N. agencies and other humanitarian groups to distribute these relief items.

But Deepti says many more needs exist, including access to safe drinking water, proper sanitation and health care, and security in the overcrowded and disorganized refugee camps.

Abdul Rahman, 21, who lost his wife in the violence, now is the sole caregiver for his 4-month-old daughter. “The baby won’t stop crying. I’m asking lactating mothers to help with feeding her, but I’m so worried. I don’t know if she will survive. We have no food. We have nothing at all,” he says.

The foreign minister of Bangladesh has appealed to the United Nations and the international humanitarian community to support the government in assisting the new arrivals. After visiting the affected areas on Sept. 12, Bangladesh Prime Minister Sheikh Hasina says that her country would offer temporary shelter and aid to the people in need, including setting aside 2,000 acres for a new refugee camp. Many international organizations are now seeking the required approval from the government of Bangladesh to begin responding to the crisis.

*The Rohingya are members of a Muslim minority in Myanmar. They are not recognized as Myanmar citizens, so they are stateless.

August recess is a key moment to meet with your members of Congress while they are out of session... END_OF_DOCUMENT_TOKEN_TO_BE_REPLACED

Use this calendar for key dates to reflect and take action with your community to address climate... END_OF_DOCUMENT_TOKEN_TO_BE_REPLACED