Far from Cairo's whirling traffic, the village of Al Dabiyyah hums along to the rhythm of Egyptian rural life.

Located just a short drive from Luxor, a popular tourist destination in Upper Egypt, Al Dabiyyah is a relatively quiet spot where about 27,000 villagers earn their living in agriculture and handicrafts, as do hundreds of others in villages throughout the country. 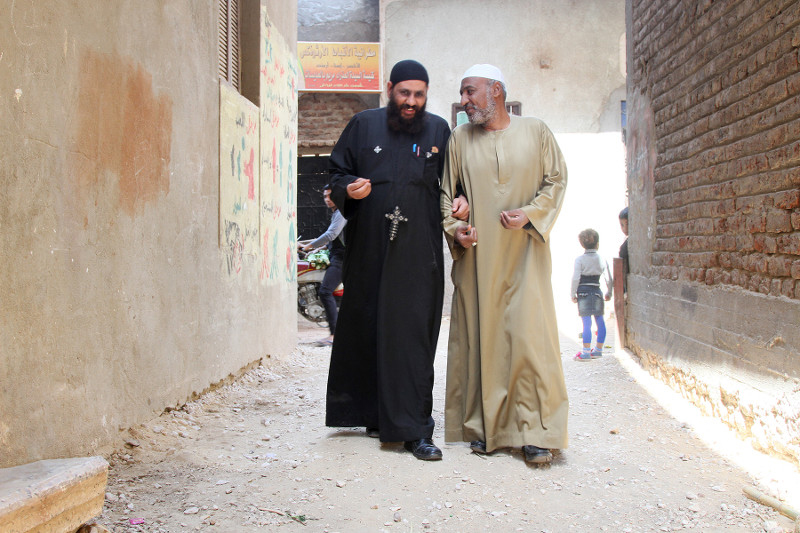 Through the CRS peacebuilding program TA'ALA, religious leaders Father Rueis, left, and Sheikh Moustafa work together to engage the faithful in interreligious dialogue in the village of Al Odayssat in Upper Egypt. Photo by Nikki Gamer/CRS
So when Al Dabiyyah erupted in sectarian violence between the area's majority Muslim and minority Christian populations, its residents were unsure about what to do. A Catholic Relief Services peacebuilding program—TA'ALA—helped provide the answer.

"TA'ALA," or Tolerant Attitudes and Leadership for Action, is an invitation to "come over" in Arabic.

"There was so much tension in the village that local leaders were afraid to conduct meetings," explains Father Rueis, the leader of the Coptic Orthodox church in the neighboring village of Al Odayssat. "If you leave a negative emotion, a small problem can explode."

The situation began when the remains of a villager were found near the banks of the Nile. When rumors circulated that Christians had killed the man, a group of Muslim youth set fire to a handful of Christian homes, resulting in four additional deaths.

Father Rueis knew that something had to be done fast, or more lives would be lost. So drawing upon the skills he learned through TA'ALA, he encouraged dialogue.

"I wanted to begin reaching out to families on both sides of the violence," he says, adding, "It's highly probable that if we hadn't had TA'ALA … there would have been more killings." 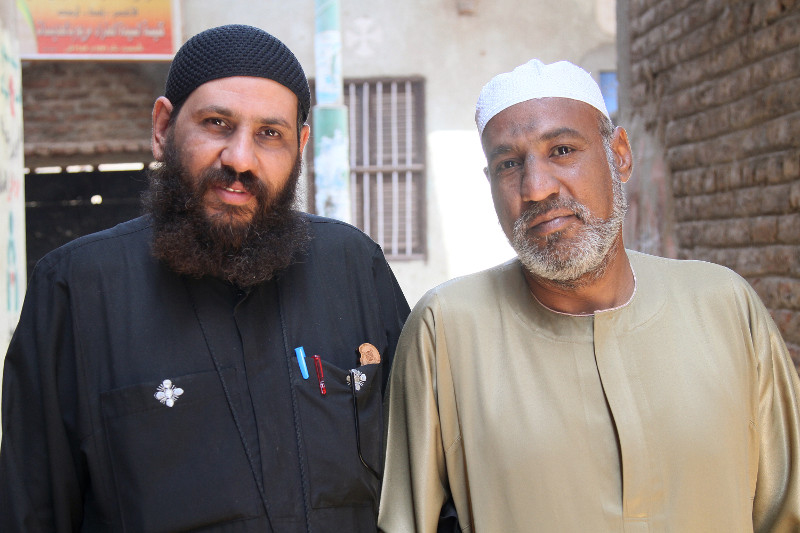 Sheikh Moustafa, right, is grateful that Father Rueis—after participating in the CRS program TA'ALA—took the first step toward rebuilding peace amid local conflict. Photo by Nikki Gamer/CRS
TA'ALA was launched in 2013, building on CRS' years of interfaith peacebuilding in Egypt and across the region. Muslim and Christian partner organizations throughout Upper Egypt carry out the work with a grant from the U.S. State Department Bureau of Democracy, Human Rights and Labor.

"The theory behind TA'ALA is straightforward," explains Roger Fahmy, who oversees the program for CRS. "If influential Muslims and Christians actively collaborate to resolve conflict and promote tolerance, and if communities take action across religious lines, then there will be less conflict because the moderate majority will have relationships, skills and the leadership to respond to situations in a nonviolent way."

The program targets at-risk communities like Al Dabiyyah through monthly training in conflict resolution and mediation for local clan and religious leaders, like Father Rueis. More than 12,000 Muslims and Christians have participated in the program through related activities such as soccer games and theatrical performances.

Youth involvement is an important part of the program. Muslim and Christian youth leaders collaborate in choosing local issues to resolve.

Fahmy compares de-escalating interreligious violence to peeling back the layers of an onion.

"The violence is on the surface," he explains. "Once you get past the surface, you start finding that people already have relationships, and there is a mutual understanding." 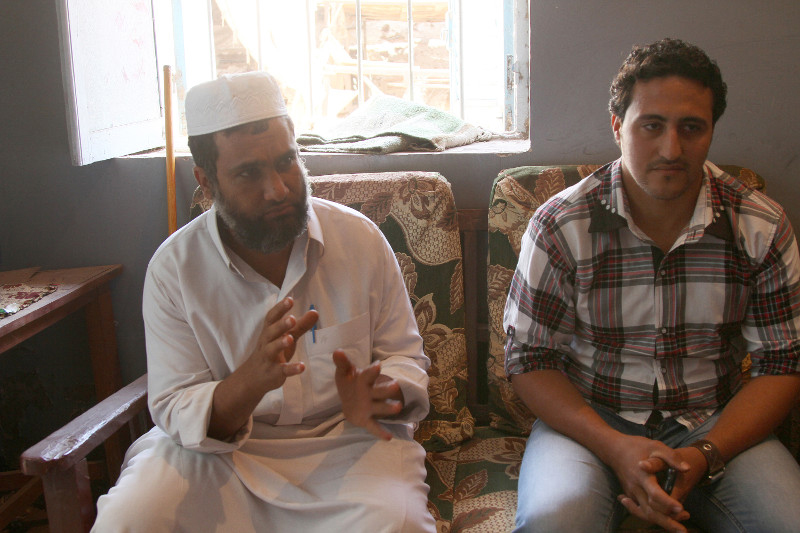 Al Dabiyyah residents Mohamed Abdel Aaty Al Taher, left, and Magdi Adly, a local painter, became good friends while participating in the CRS peacebuilding program TA'ALA. Photo by Nikki Gamer/CRS
Strategies to engage the "other"—which participants develop as a part of the conflict resolution training—can be as simple as having people meet over a cup of tea.

Father Rueis credits TA'ALA for his outreach in the Al Dabiyyah conflict. While he was offering condolences to families of the Christians who had been killed, he overheard a sermon on forgiveness and peace at a nearby mosque by a sheikh, whom he had met through the TA'ALA workshops. Father Rueis decided to work with the Muslim community to bridge local divides.

Another local religious leader, Sheikh Moustafa, says he was grateful to Father Rueis for taking that first step.

"In Egypt, there has always been a strong bond between Christians and Muslims," Sheikh Moustafa said. "The essence of Islam is love and peace. This often gets lost in the politics. Extremist Islamic groups have a louder voice than the moderates."

"I see hope in the youth," Sheikh Moustafa adds.

In thinking about the conflict and the CRS contribution to healing the community, Father Rueis concludes, "The TA'ALA project created a paradigm for approaching problems, especially those with such high stakes. Unlike other groups—that pay for hatred and weapons—CRS contributes to peace."

A prayer asking God to help us recognize family in each of His children, to know them as brothers... END_OF_DOCUMENT_TOKEN_TO_BE_REPLACED