Over and over Syrian and Iraqi refugees in Jordan and Lebanon express the same concern. Even more than their desire for a roof over their heads or a permanent home, they profoundly wish that their children—many of whom have been severely traumatized—can return to school. 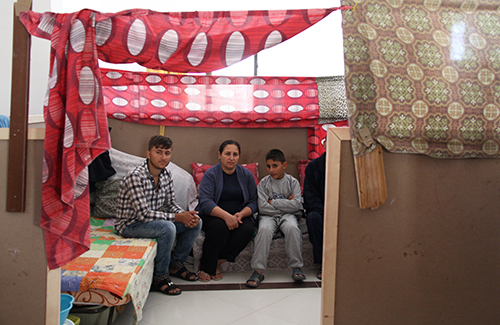 The Raeed family of five shares three mattresses in a tiny space at Our Lady of the Assumption Armenian Catholic Church in Amman, Jordan, after fleeing their home in Mosul, Iraq. Photo by Kim Pozniak/CRS

For the refugees, who barely escaped the conflicts in their homelands with the clothes on their backs, the concern for their children is universal:

"The most painful thing is that my children can't go to school right now."

"The lack of education opportunities for our children is the worst."

"I feel bad that they have this intelligence and can't continue their studies."

Together with our Caritas partners, Catholic Relief Services is addressing families' desire for education and healing for their children, many of whom saw their family members killed and their homes bombed. In addition to helping 350,000 Syrian and Iraqi refugees in Jordan and Lebanon with rent assistance, food, medical care and living supplies, CRS is providing education and counseling for children.

Seeking Safety amid Bombs and Shelling

On August 6 in Mosul, Iraq, high school students Astela Raeed, 15, and her older brother were studying for final exams when they heard bombs and guns in the distance.

"For them not to be scared or distracted by the sound, I turned on a generator and closed the windows," says their father, Dawood Raeed. He helped his children study and hold on to normal life for as long as possible, but after hearing that shelling killed a young woman and two children in their neighborhood, the Raeeds realized it was time to go. They left the books on the table and fled as soon as they heard the news.

"The city was trapped in the middle of a gun battle between [ISIS] and the Kurdish [government fighters]. The whole city was really scared and we left," Dawood says.

Astela snatched some of her books before leaving the house, but otherwise the family left with nothing. "I felt really sad [when we left Mosul]. I was in pain to leave home. And I was really sad to leave my school. It was my dream to continue my studies," she says.

Two years earlier, another family had to make the same painful decision to leave home amid bombs and gunfire. "We didn't feel safe," says Latifah, a mother of four who fled her home in Homs, Syria, in the middle of the night. "There wasn't even moonlight. We had to walk throughout the night to cross the border [into Jordan]. We walked without light to be safer and even gave our children sleep aids to keep them silent."

Speaking in a low, soft voice and fighting back tears, Latifah recounts the horrors of that night. "The kids were really frightened. I was holding them very tight so they wouldn't get lost."

More than 13 million people—more than the population of Los Angeles—have been displaced by the conflicts in Syria and Iraq, according to the United Nations refugee agency. They are mostly women and children, and many have flooded into neighboring countries, including Turkey, Lebanon and Jordan. Many of the refugees can't work and their children can't go to school. António Guterres, the U.N. High Commissioner for Refugees, has called this a "megacrisis." It's expected to get worse.

Amid Desperation, a Thirst for Knowledge 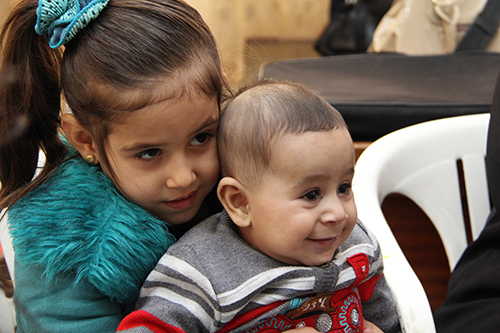 Rawan, 5—playing with her baby brother, Ahmad—attends a CRS-supported preschool for Syrian refugee children in Jordan. Her mother says the school has made her "stronger." Photo by Kim Pozniak/CRS
Latifah and her 4 children have lived in a small village on the outskirts of Ramtha, Jordan, for 2 years, while her husband works in Kuwait. Just 26 miles from Daraa, the Syrian city where the civil war started in early 2011, Ramtha is one of the main cities Syrians fled to. Latifah and her family are among 2,500 Syrian refugees who now make up nearly 20% of the local population.

Life in Ramtha is hard. Since the war in Syria started, rent has risen dramatically and many Syrians have found it difficult to adjust.

"A big problem is that the schools are overcrowded and there aren't enough resources," Latifah says. Her friend Narima, whose 5-year-old daughter attends the same school, echoes the concern about Syrian refugee children. "I feel bad that they have this intelligence and can't continue their studies."

Like Latifah, Narima fled Syria 2 years ago. "I miss my country and my home. When we remember the old days, we can't believe we were complaining. Those were the best days."

Latifah and Narima have found hope in a preschool supported by CRS and its partner Caritas Jordan, and run by a local charity, the Al Buwayda Charity for Social Development. With teachers and experienced volunteers recruited from the local community, the school provides counseling and education to 80 children, including Narima's daughter.

Her daughter's well-being and behavior changed after she began attending the preschool and learning basic skills, Narima says. "She's become stronger. She learned to write."

In addition to education, children from Syria and Iraq need trauma counseling. Partnering with No Strings International—and working with creators of The Muppets—CRS and Caritas use puppetry to help children who have been traumatized. Children help make the puppets, and CRS trains local volunteers, some of whom are also refugees, to use the puppets and short custom-made films to help the children open up and process their feelings.

"With the puppet techniques, the children express their feelings, and making the puppets is joyful for them and they become a friend for them," says Charbel Zgheib, project coordinator for Adyan, a CRS partner in Lebanon.

"The results of the program are impressive. Many of children feel that they weren't normal children. Some children talked about sexual abuse and trauma inside Syria and what they have seen: blood and massacres. It is important for them to express themselves through the puppets," he says.

In Lebanon's Bekkaa Valley, near the Syrian border, Sister Micheline Lattouf of the Good Shepherd Sisters also uses the No Strings concept with Syrian children living in refugee camps. The crises in Syria and Iraq aren't hopeless, she says.

"When I see the transformation in the children [after the program], they're happy. They want to learn. When I see them, 30 to 40 children in a small room just waiting to learn, that gives me a lot of hope for the future."

Back in Amman, hope is alive too. Sitting on a mattress in a small church space where the Raeed family is staying, Dawood says he's hoping for a better future for his three children. "We only made this decision [to flee Iraq] for our children, and still have faith in God. I have Jesus to give me anything in the future," Dawood says.

August recess is a key moment to meet with your members of Congress while they are out of session... END_OF_DOCUMENT_TOKEN_TO_BE_REPLACED

Watch videos on the issues of hunger and climate change here. END_OF_DOCUMENT_TOKEN_TO_BE_REPLACED