Sophie Ouedraogo was working at a small canteen in Gwargui Village, Burkina Faso, earning around a dollar a day—barely enough to cover her family's household expenses.

"It didn't meet my needs," says Sophie, a widow with three school-aged children. "It was really hard to pay for my kids' schooling. And at harvest time, I had to sell everything on my farm." So there was no food left for her family to eat. 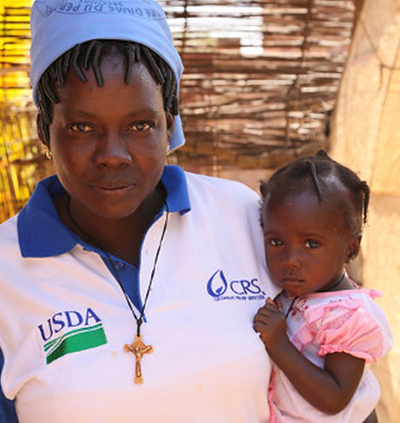 Sophie wanted to start her own canteen, where she would brew "dolo," Burkina Faso's traditional homemade beer. But how would she ever come up with the money for startup costs?

The answer was in a Savings and Internal Lending Community, or SILC. Organized by Catholic Relief Services, SILCs help members pool their money, save over time and borrow to meet pressing needs or to develop business opportunities.

During a recent meeting, 30 members of Sophie's SILC group convened under a community pavilion. Women of all ages gathered to make their weekly contributions: $2, $3 and $5 were dropped into a bucket, with the group helping members determine what each one could afford. The contributions were counted and recounted. At the end of the meeting, the group had saved more than $100, which they put in a box with three locks. Three different members each hold one key. A fourth member holds the box.

To start her business, Sophie borrowed approximately $200. It paid for firewood, clean water, benches, buckets, serving cups and bowls, and sorghum—the grain used to brew dolo. It would have been nearly impossible for Sophie to save $200 on her own. That would be more than half of her yearly earnings. 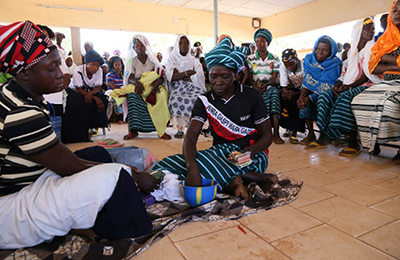 SILCs in Burkina Faso and around the world are helping more than 1 million people start successful businesses, create jobs and support their families. Photo by Michael Stulman/CRS
SILC provided Sophie with a pathway to prosperity, as it has for so many around the world. As of March 2015, CRS had helped more than 1 million people worldwide join SILC groups.

Sophie learned how to brew dolo at her previous job. Now she is putting that knowledge to use. As her business grows, week by week, Sophie has repaid her loan principal and interest. Like the group's savings, interest earned from loans is pooled and then divided among SILC members.

CRS started SILC groups in Sophie’s village as part of the USDA funded Beoog Biiga project in 2012. After only 6 months, Sophie's time spent growing her business began to pay off.

"If I start selling in the morning, it's gone by the evening," she says of the dolo, which she brews twice a week.

"After 3 years in SILC, I can pay for my kids' school fees all at once, whereas before it was little by little. My kids eat better. My daughter goes to middle school, and I bought a bike for her."

The SILC loan has benefited Sophie's community too: She has hired three assistants to help her. And Sophie has expansion plans—she wants to open a soda shack.

We seek daily renewal from the source of all life, and so we pray ... END_OF_DOCUMENT_TOKEN_TO_BE_REPLACED

Our walk with God is reflected in our walk with others, and so we pray ... END_OF_DOCUMENT_TOKEN_TO_BE_REPLACED