Each morning as the sun begins to filter through the corn stalks, Janet Anyango Okeyo fills up a wheelbarrow with sundries such as laundry detergent, candies and cooking oil and walks the 5 minutes to her corrugated tin kiosk. The youngest of her six children trail behind her carrying boxes of goods and bags of bread to hang from the wires that crisscross the front of her store in a small village in Western Kenya. 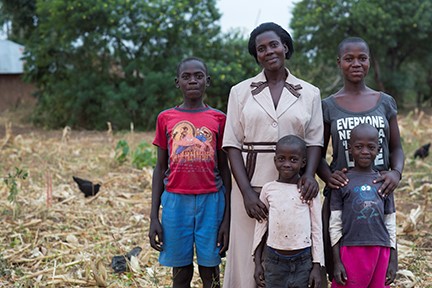 Janet Anyango Okeyo, with four of her six children, lost everything when her husband contracted HIV. The Children Behind, a CRS initiative, helped her earn enough to care for her family. Photo by Sara A. Fajardo/CRS

Motorcycles and bicycles kick up dust as they travel down the main road where Janet has set up shop. Schoolchildren run past on their way to school, often stopping to purchase a piece of candy. A few yards away, villagers dip buckets into an open canal to pull their household water. Strips of salt packets and other seasonings tap in the breeze as Janet makes change for customers and calculates how much merchandise she'll need to replenish in the coming days.

What started with a handful of items purchased from the sale of a chicken has grown into a full-fledged business. A few years ago, the titles "shopkeeper" and "pillar of the community" were not titles Janet thought would ever be hers, but now she is both.

HIV was a death sentence

Janet is from a region of Kenya where roughly 25% of people are HIV positive. After her husband became ill, Janet invested all the family's savings and other assets in trying to restore his health.

"He ailed for a long time," Janet says. "In the former days, if you were diagnosed with HIV the doctors wouldn't tell you your diagnosis directly. They hid the truth. My husband grew thinner and thinner … he ailed until he finally died. I used all the money I had. My family returned to zero."

A decade ago—around the time her husband died—HIV was a death sentence. Stigma and fear of dying kept many people from learning whether they had the virus. Friends and neighbors would often shun loved ones out of fear. To live with HIV was often to suffer in silence.

When Janet's husband died, she not only lost her companion and the father to her children, she lost—as countless others have—an extra pair of hands to tend the crops and all of her financial resources. Her family was destitute. The children had to drop out of school to help work the land. The livestock was sold and the family was living hand to mouth. 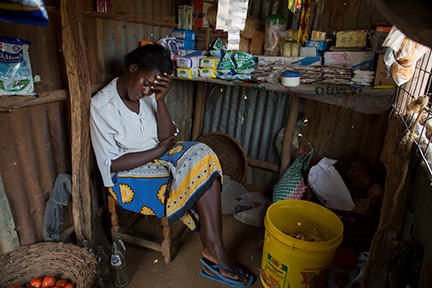 A CRS-supported saving and lending group in Kenya is helping Janet Anyango Okeyo grow her store and care for her family. Photo by Sara A. Fajardo/CRS

Janet later began to show symptoms similar to her husband's. She knew what could happen if she ignored the symptoms, so she decided to get tested and seek help.

Eventually Janet joined Catholic Relief Services' project The Children Behind, which helps families affected by HIV and other illnesses. Janet received counseling and was placed on lifesaving antiretroviral drugs. Her children got help to pay school fees. And Janet was introduced to the concept of Savings and Internal Lending Communities, a microfinance tool that helps people save, invest and borrow money.

Access to financial resources is one hurdle that many poor families find impossible to scale. Banking institutions often won't lend money to those who don't have collateral or who live in remote rural communities. SILC, in contrast, encourages the working poor to form groups and save incrementally. They then make loans to one another using their communal savings. Interest earned is distributed to members in lump sums annually.

"SILC has helped people living with HIV because when you are in SILC you cannot lack money," Janet says. "You can take out a loan when you don't have money. If you are sick there is also the social fund," Janet says, a special fund SILC members set up to offer no-interest loans and often cash gifts to members who face health and educational hurdles. "We can give you [members] money from the social fund to help with hospital [costs]."

Savings' grace: 'You have love in SILC' 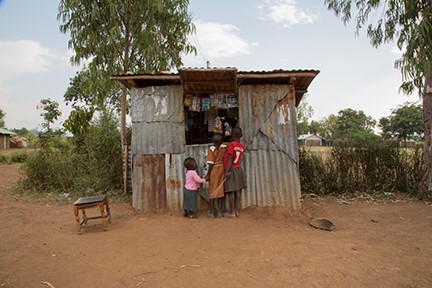 Replacing her tin shop with a brick-and-mortar store is one investment Janet Anyango Okeyo plans to make using money she saved through a CRS-supported Savings and Internal Lending Community. Photo by Sara A. Fajardo/CRS

At 10 o'clock Janet hands over the management of her shop to a friend so she can attend her weekly SILC meeting. It's nearing the end of the savings cycle and the cash box is overflowing with bills. Members line the chairs of the sitting room taking turns repaying loans and contributing to their savings fund. Every member can recite how much they've saved, how much they owe, and the total savings of the entire group. The treasurer and secretary record the numbers while Janet, the chairperson, monitors the meeting.

"SILC has taught me a lot," Janet says. "SILC enables you to avoid being too poor. You have money in your hands all the time because you save a little but take a lot. That's why I love SILC so much. SILC doesn't have discrimination. Be it that you are sick, they take you as you are. Be it that you are in good health, you take yourselves as you are. Then you have love in SILC."

This year Janet has accumulated more than $300 in savings, not including the interest she's earned. That's almost $100 more than last year. In the past Janet has used her savings to rebuild her home, buy cows, and build her business. In addition to saving, Janet and other group members learn skills they can apply in their businesses.

Loans helped Janet begin purchasing products in bulk to stock her store. saving time by cutting trips to the market. "I thought that if I got money, I should buy such [quantities] that I don't have to rush [to the market] for more every time," Janet says. "I thought that it was good to take a greater quantity at once. I now take 3 or 4 days before going for more stock."

The day is waning and it's time to close up shop. Customers have streamed in throughout the day to purchase small bags of cooking oil and treats for their families. School has let out and only a handful of villagers are left collecting water to use in the evening meal. Janet loads up her wheelbarrow with items. It will take three round trips home and her children's help to empty the shop. After all of the shelves are emptied she closes and padlocks the door for the night.

Janet has big plans for her share of the SILC interest payout this year. She'll buy a water tank to collect rainwater for her family because the unprotected, open communal water point is easily contaminated and outbreak source of disease. She's also already dreaming of what she'll do next year. Perhaps build a brick-and-mortar store to replace the tin one so she won't have to cart her wares home each night.

Among the rewards SILC provides to Janet and others is the ability to make their dreams for the future a reality. In a few years, she predicts, "You will find many changes (in my life). My cows will have given birth. My shop will be bigger and doing well, and the children will have completed their education."