Meeting a Need with Love

It was 1975, and Monsignor Robert J. Coll of Allentown, Pennsylvania, got an idea about how to end global hunger: Bring the problem home, and raise some money in the process. 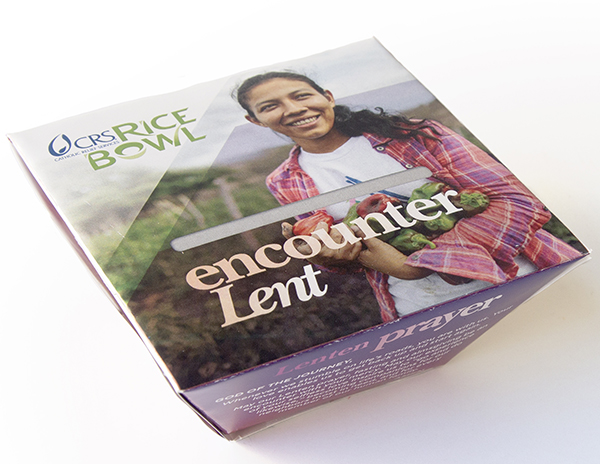 CRS Rice Bowl is an annual Lenten spiritual formation program that also helps end hunger at home and around the world. Photo by Lauren Carroll/CRS

As he told People magazine, he wanted well-fed Americans to be temporarily “hungry enough to hurt,” so they would know what “500 million of our fellow human beings feel like 7 days a week.”

So was born what is now CRS Rice Bowl. Though founded as an interfaith program involving both a Protestant church and Jewish synagogue in Allentown, Operation Rice Bowl, as it was then known, was always focused on the Lenten season. It called for participants to eat a “sacrificial meal” and put the money they saved by eating inexpensively in their cardboard rice bowls. As their sacrifice led them to understand hunger, their donations helped feed the hungry.

In its story, People wrote that Coll “extended his sharing ministry to Allentown parochial schools. Students were urged to substitute water for their usual soda or milk at one lunch a week.”

Catholic Relief Services’ Jim DeHarpporte remembers receiving funding from that initial Rice Bowl collection. He arrived in Calcutta as CRS’ zonal director for eastern India in June 1975, and heard about a delegation from Allentown that had recently visited with stories about raising money to alleviate hunger overseas. He was told that $25,000 was being granted to CRS.

DeHarpporte, now CRS regional director for the West Coast, recalls the money supported an infant feeding program. “Because of the poverty in Calcutta, most children suffered from low birth weight and were breastfed long after they needed supplementary food, which begins at about 6 months old,” he says.

A doctor, S.N. Chaudhuri, and an Australian nun, Sister Pauline Prince, were working in a poor neighborhood on the southern edge of Calcutta when they came up with a plan to roast wheat and add lentils—known as dal—to provide needed nutrition.

“The funds provided by Rice Bowl were used to purchase the wheat and dal,” DeHarpporte says, noting that CRS also provided U.S. government-donated milk powder to add even more nutrition to the supplemental food.

The People story on Monsignor Coll was published in April 1976, as Rice Bowl was breaking out of Allentown. An important step toward national recognition came at the 41st Eucharistic Congress, which was hosted that August by the Archdiocese of Philadelphia. Thousands of Catholics came from around the country—and around the world—to the Congress, whose theme was The Hungers of the Human Family. Rice Bowl fit right in, seen by many bishops at the time as a way to help the family table become the family altar. 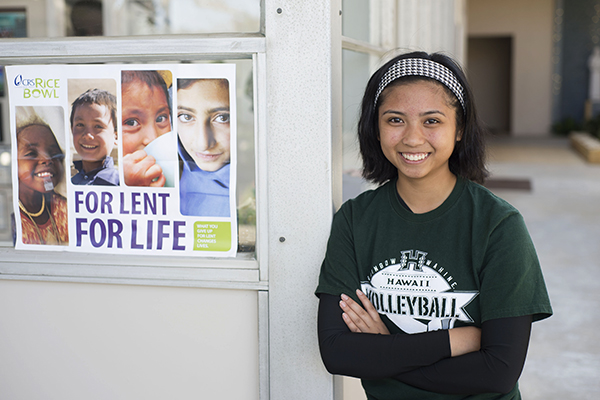 As part of a global solidarity week, students from the Cornelia Connelly School in Anaheim, CA, ate a simple rice meal and donations were collected for CRS Rice Bowl. Photo by Philip Laubner/CRS

That year, Maureen McCullough, who is now CRS regional director for the Northeast/Mid-Atlantic, was working for the Faith Justice Institute at St. Joseph’s University in Philadelphia. It was one of the sponsors of the Eucharistic Congress, and Monsignor Coll’s alma mater.

McCullough remembers how the planners of the Congress hoped the Rice Bowl Lenten meals and the Eucharistic meals would enrich each other, bringing a greater sense of solidarity and compassion to participating families.

It was on the second day of the Congress that Rice Bowl was launched. That day focused on the Hunger for Food. Mother Teresa came from Calcutta and led attendees in a prayerful and symbolic bread-breaking ceremony.

“It reminded all that we are called to break open our hearts and lives to the needs of others and respond in real and tangible ways,” McCullough says. “Four decades later, I believe CRS Rice Bowl does just that for all who participate.”

The Congress helped launch CRS Rice Bowl as a national program that would split the funds raised between international and local feeding efforts. Cardboard rice bowls were dispatched to dioceses all over the United States.

Some went all the way across the country to Seattle, where J.L. Drouhard, the diocesan director there, says the program was immediately embraced. Staff member Patrick Sursely personally delivered cardboard rice bowls to parishes throughout the diocese’s 25,000 square miles. “Catholics fasted and prayed for unseen sisters and brothers in other lands, in a new and exciting way, and raised over $72,000 that first year,” he says.

Over the years, CRS Rice Bowl has grown into an intrinsic part of the Lenten season in Seattle. “CRS Rice Bowl has become a partnership in forming faith and feeding the world,” Drouhard says. “CRS truly considers dioceses, parishes and schools as partners in its mission, a model that has created a unique ownership by our people. They consider it their Lenten program of solidarity.”

“As for me,” he says, “my kids grew up with Rice Bowl as a sacramental feature of their Catholic upbringing. During Lent, we always traveled with boxes of Rice Bowls in the trunk of our car, ready to be dropped off at parishes that had run out. The kids have grown up, moved away, but they expect a rice bowl personally mailed by their dad to arrive by Ash Wednesday.”

Today, CRS Rice Bowl involves millions of Catholics of all ages every year. It has raised more than $250 million over the decades. The international-local split remains, with 75% helping CRS conquer hunger overseas, and 25% remaining with local dioceses to tackle hunger issue at home.

Monsignor Coll made feeding the hungry his personal mission, eventually spending years working for CRS and helping set up an interfaith feeding program to combat famine in Ethiopia in the 1980s. CRS still administers the descendent of that program, which feeds millions of Ethiopians every year.

And the nickels, dimes and quarters that Monsignor Coll first collected in cardboard rice bowls in Allentown now reach the hungry in many countries, with a legacy that reverberates beyond that. DeHarpporte, who served CRS in Calcutta until the end of 1980, saw Dr. Chaudhuri use the child feeding program CRS Rice Bowl helped fund as a springboard to found the Child in Need Institute, which focuses on infant malnutrition.

“His vision, tireless work and extraordinary commitment to help the poor was recognized by many donors, who provided support which enabled CINI to become nationally and internationally recognized,” DeHarpporte says. “CINI is still serving the poor in India. CRS Rice Bowl can be proud that this Institute began with funds contributed by that first Rice Bowl grant in 1975.”

Invite a CRS Global Fellow to speak to your community during Lent to learn how your CRS Rice Bowl... END_OF_DOCUMENT_TOKEN_TO_BE_REPLACED