The extended dry spell in Ethiopia through 2015—exacerbated by El Nino—is now threatening the lives of 10.2 million Ethiopians, while relief programs remain underfunded.

“We need to begin procuring food now, because from start to finish, shipping over sea routes and transport into land-locked Ethiopia takes up to 4 months,” says Matt Davis, the country representative for Catholic Relief Services in Ethiopia. Without additional funds, food supplies will run out as early as July, he says. 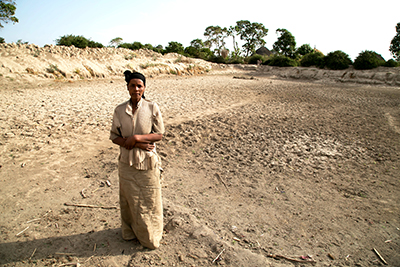 Badoo Fukura stands at the bottom of a basin that used to be the community watering hole. It served about 30 different families before going dry in October. Photo by Nancy McNally/CRS

The government of Ethiopia, development partners and the United Nations are calling for an additional $400 million before the end of February to respond to the emergency.

CRS is the lead agency in the Joint Emergency Operation Plan, a consortium of partners working with the Ethiopian government and the United Nations World Food Program to provide food assistance to the most vulnerable people in Ethiopia. The government has long had a plan in place called the Productive Safety Net Program, which slowly “graduates” people reliant on food assistance to independence through cash-for-work and education programs. But the scale of the emergency, especially the devastating effects of El Niño, threaten the development progress Ethiopia has made in the past decade.

More than 80% of Ethiopians rely entirely on agriculture—which requires rain—for food and income.

“What is worrying is it’s being widely presumed that the spring rains, which are notoriously unreliable, will be successful,” Davis said. “We need to be prepared even beyond August, since we are really in uncharted waters with El Nino.”

A drought of this magnitude forces many Ethiopians leave their rural homes to make a daylong trek to get water. They travel in donkey carts for hours to reach a town, and then line up for hours to buy water. It’s an all-day affair. The streets are clogged with carts with any and every type of water container—mostly yellow plastic jerry cans.

Some people cannot afford to buy water, and don’t have donkey carts either. They are pushed to the brink. Badoo Fukura is among them. The 28-year-old mother lives in a landscape-turned-dustbowl in the countryside near Shashamane, 150 miles south of Addis Ababa, the capital. 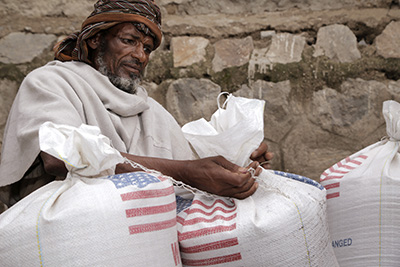 Ethiopia is currently faced with the worst drought in 50 years. CRS is providing emergency food assistance to some of the most vulnerable Ethiopians, as the lead agency in a USAID-funded assistance plan. Photo by Nancy McNally/CRS

Although she has two daughters, ages 5 and 6, only one is with her. “I had to send one girl to stay with relatives 2 hours away, because I could no longer afford to buy water for both of my girls,” she says.

Standing at the bottom of a dried-out basin that was the community’s watering hole, she says, “When the rains come, we normally have water here for 6 months afterward,” she says. “This year, it lasted 2 months.” About 30 families relied on the water for washing, for their animals and for household consumption, but it’s been dry since October 2015.

Drought doesn’t just mean not having enough drinking water. It unravels the social fabric of families and communities, together. It wreaks havoc on the poor, threatening their lives today and their psychological well-being for years or decades.

For the poorest of the poor, the decision to send a child to stay with relatives who may live far away entails the risk that a child will be put to work, and that girls will become child brides.

“Ethiopia has made tremendous strides in 3 decades since famine hit,” says Davis. “It has been hard work on the part of the government, the people and those who are here to help. We can’t let this El Nino, which should not last for that long, cause us to lose what we have all worked so hard to build.”

The government of Ethiopia and the CRS coalition that includes 65 other humanitarian organizations seek $1.4 billion in funding for 2016. It would cover emergency food aid for 10.2 million people; water, health and sanitation services for 5.8 million people and improved nutrition for more than 2.1 million people, including 400,000 severely malnourished children.

Of the 10.2 million, the government of Ethiopia will cover 5.7 million people, the CRS-led coalition will cover 2.6 million people, and World Food Program will cover 1.6 million. However, this large-scale humanitarian response will require an additional estimated $90 million for the coalition for the fiscal year. Even if the number of people needing assistance remains stable, the current level of funding expected from USAID Food for Peace will last only until July 2016.

The CRS Ethiopia agriculture team conducted a rapid seed assessment in late November in four of the most severely affected regions of Ethiopia. The team collected data on major crops, seed sources, quantities of available seed and the estimated number of seed-insecure households. The U.N. Office for the Coordination of Humanitarian Affairs then committed $2.5 million to CRS for additional seed and livelihoods recovery activities in 2016.

YOUR HELP IS URGENTLY NEEDED

August recess is a key moment to meet with your members of Congress while they are out of session... END_OF_DOCUMENT_TOKEN_TO_BE_REPLACED

Use this calendar for key dates to reflect and take action with your community to address climate... END_OF_DOCUMENT_TOKEN_TO_BE_REPLACED