Mali: A Warm Welcome Amid Turmoil

I'm very big on atmosphere. I'm one of those people who can walk into a room and tell whether its inhabitants are feeling generally perky—or have just had a blazing row.

Whenever I travel around West and Central Africa for Catholic Relief Services, I subconsciously seem to work out whether I like the feel of a place. So, when I arrive in Mali, my antennae are twitching. 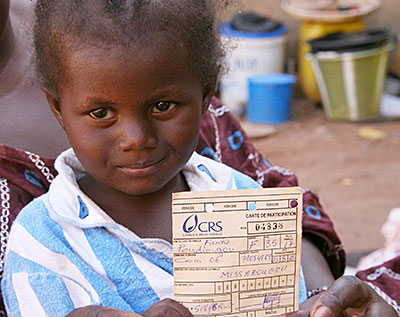 Three-year-old Saouda Keita lives with 16 family members in rented rooms near Mali's capital, Bamako. CRS provides monthly cash distributions to families that fled rebel control to the north. Photo by Helen Blakesley/CRS
Mali, a country nestled in the middle of West Africa, has become a nation divided in two. Ever since a military coup destabilized the political landscape in March 2012, various rebel groups have occupied (and are vying for control of) the north—an area the size of Texas. Reports of atrocities against northern Malians abound: Killings, maiming, rape and the recruitment of child soldiers are everyday occurrences.

Since March, more than 200,000 people have left their homes and fled to neighboring countries. Another 200,000 have moved south, many to the nation's capital, Bamako. These are some of the people CRS is helping, and these are the people I have come to meet.

Before I flew to Mali, I'd been told that tourism to Mali had all but dried up. What was once a steady stream of visitors to this historic country, so rich in culture and music, has stymied to a trickle. Even CRS has changed policy so that international staff, if posted there, can't bring their children.

So, I'm not expecting the friendly, relaxed feeling I get from Bamako, a leafy city on the banks of the Niger River. Sure, there is urban bustle, but there is friendliness, too. This can't be an easy feat, when folks are worried about what's happening in the northern part of their country and about what the future holds.

With the thermometer nearly a full 20 degrees Fahrenheit higher than in Dakar, Senegal—my home away from home—I'm taken by a CRS team to visit some internally displaced people, or "IDPs," in Bamako. Some are staying with relatives, others with host families and some are renting rooms—if they can afford them.

As always, before meeting with people who've been through something traumatic, I ask myself, "Will they want to speak with me?" I remind myself to go gently with them.

'I Miss My Friends'

We visit the Touré family at their home in the Attbougou neighborhood. Already a family of 24, they have welcomed 32 relatives who escaped the Gao region of the north. Some have made other arrangements or traveled elsewhere, but now there are 14 people sharing one living room, two bedrooms and one bathroom. 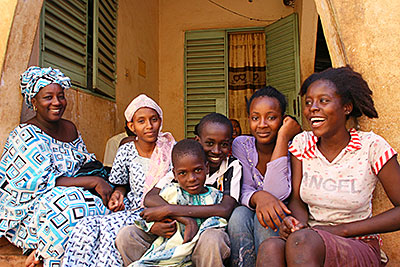 Hawa Tour, far left, is one of 200,000 Malians displaced by violence in northern Mali. She and her family have taken refuge at a relative's home in the nation's capital to the south. Photo by Helen Blakesley/CRS
I sit with Moctar, the head of the Touré household. The retired customs officer, who has cropped white hair and a youthful passion, confides, "We're tired, so tired. Sometimes I think we're done for!"

I chat with family members who made the journey from Gao. I'm struck by their openness and their willingness to tell me their story. A little cat comes over for an inquisitive look. There's laughter. Moctar's daughter Fatimata tells me, "When you're with your family, there is always joy." But the tension is also there, as is the worry and fatigue. Twelve-year-old Aminata's eyes brim with tears as she admits, "I miss my friends."

CRS is trying to help ease some of their worry by providing cash distributions each month. Targeting the poorest and most vulnerable, CRS is distributing around $16 per person to help cover basic food needs or rent costs.

At the next home I visit, the two women who head the household (their husbands stayed behind in Gao to look after the family shop) are using that money for rent. They wanted to take the pressure off their host family, so have found three rooms for themselves and their 15 children.

"We're thankful to CRS," Mariam Dembélé tells me. "You've given us our dignity back." As her sister-in-law Fanta Poudiougou explains how older members of the family couldn't, or wouldn't, come with them to Bamako, both women's eyes fill with tears. I can't help following suit. They're afraid of what the planned military intervention in the north will mean for the civilians left behind. But they can't see another way to liberate their country from extremist rebel groups.

During my stay, more than 3,000 people gather in Bamako for a peaceful march against religious extremism. They want the world to know that the rebels in the north are not representative of their country—some of the rebels are not even from Mali, but have entered the country to take advantage of a fragile state. And the violence is now affecting more than Malians. I learn that a French man in his sixties was recently kidnapped in the west of the country—not even near the occupied territory. These are complex and concerning times for Mali.

As I board the shuttle bus at the airport, I see a sight that strikes me as symbolic. The man checking us for weapons is holding his prayer beads in one hand, a metal detector in the other. I see this as a visual embodiment of the fact that religion and security can coexist. I would love to think it is a good omen for the path Mali will tread.

Read the latest update from CRS country programs and partners around the world as they respond to... END_OF_DOCUMENT_TOKEN_TO_BE_REPLACED

Read the latest two-page summary from CRS country programs and partners around the world as they... END_OF_DOCUMENT_TOKEN_TO_BE_REPLACED