Djélika Haïdara pushes a braid off her face and hitches her 5-month-old son higher onto her hip. She leans down to look into the metal pot simmering on the wood-stoked stove set on the kitchen floor.

Cooking has been her main occupation since they left Timbuktu, in northern Mali—since they fled in fear for their lives. 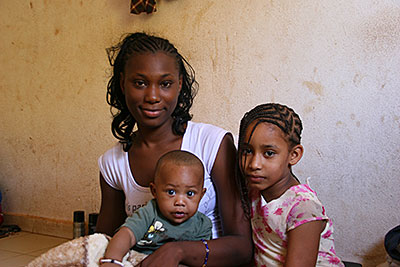 Djélika Haïdara fled her home in Timbuktu, Mali, while still pregnant with 5-month-old Ousmane, center. They now live in the capital, Bamako, where CRS is helping them with their rent. Photo by Helen Blakesley/CRS
The day the rebels came, Djélika was sitting in a classroom with the other students, as she always did, listening carefully to the teacher. It was her favorite lesson: physics and chemistry.

Then the gunshots started, startling the teenagers seated at their desks in neat rows. The rebels weren't far away. Their stray bullets found innocent targets in the small school building. Some students fainted, others hid, others were hit—and a number died.

Djélika was pregnant at the time, a newlywed bride carrying her first son. She knew she had to get out. She slipped out of the classroom, skirted the building and ran to the back wall. She managed to pull herself up and over and kept on running.

When Djélika's mother-in-law heard what had happened, she knew they couldn't take any chances. Through her tears, she pleaded with her son, Djélika's husband, Mohamed, to take the family away to safety. Take them anywhere but here.

The next day, a crowd gathered outside a neighbor's house. As she walked past, Djélika heard shouts and asked a woman what was going on. "They're cutting his hand off because they say he's stolen."

The family packed what they could into bags and paid for passage in cars that would speed along the desert roads. It took nearly all of their savings. Three days later, they arrived in Bamako, the capital.

Getting back on their feet with CRS 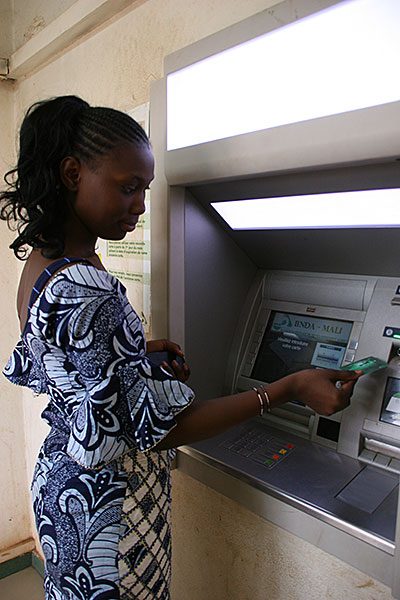 CRS is providing Djélika with a debit card that allows her to withdraw funds as she needs them. Photo by Helen Blakesley/CRS
Djélika looks down into baby Ousmane's face. Here they are, sharing rented rooms with 20 other members of the family. One bathroom serves all of them.

Things are expensive in the capital. The last time she walked to the market, a sack of rice had reached $80. It used to be $40.

The family is finding relief, though. Catholic Relief Services is providing money to cover the rent. Sometimes, enough remains to go toward some rice or millet to eat. Luxuries, such as the colorful bracelets Djélika likes, will have to wait.

The way CRS gives that money helps Djélika feel a little less like she's sitting there with her hand outstretched. The family receives a prepaid debit card—worth close to $16 per person per month—so they can choose which ATM to use, when to withdraw their cash and how much to take out each time. There's no standing in line.

Little Ousmane reaches up a tiny hand to pat his mother's cheek. Djélika misses her studies and her old life, but at least the family is together. At least she has her child in her arms.

When all this is over, she'll go back. When peace settles in Mali, she'll carry on studying. In her mind's eye she sees the future. She sees herself, a midwife, bringing more babies into the world. She just hopes it will be a peaceful one.

Read the latest update from CRS country programs and partners around the world as they respond to... END_OF_DOCUMENT_TOKEN_TO_BE_REPLACED

Read the latest two-page summary from CRS country programs and partners around the world as they... END_OF_DOCUMENT_TOKEN_TO_BE_REPLACED