Promisi—pronounced "Promise"—grips a large red plastic building block as her classmates sing with gusto. "The vowels are A-E-I-0-UUUUU," they chant, forming a circle around Promisi, who is sitting in the only chair in the room. She peers at them from the corner of her left eye, looking at them as if trying to pluck a memory from her mind. She drops the block, cries out, and a classmate runs to replace it on the small wooden table connected to her seat. Her older sister Mercy gives her a hand-sewn doll. 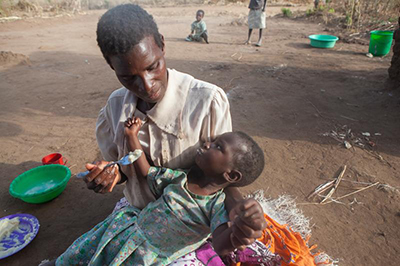 Teresa Kananji feeds her daughter Promisi, 3, a breakfast of warm porridge. Promisi suffered a stroke that left her paralyzed when she was 2½. Photo by Sara A. Fajardo/CRS

The Tianjane Community-Based Child Care Center in Nsanama Village, Malawi, has always been a second home to Promisi. She was an early walker. At 9 months she would often forgo her morning bath and toddle over to the community-run nursery school only two doors down from her home. Her mother Teresa Kananji, 35, would chase after her and whisk her back for a quick scrub down before the teachers arrived.

Promisi was an eager pupil and quickly memorized all the school songs and would chant her numbers and letters while doing chores at home. Then the seizures began.

They first happened at the school and convulsed her little body so hard that her mother thought she'd died. The community elders detected she was still breathing and sent the two of them to the clinic. At 1 year old, Promisi was diagnosed with epilepsy. She recovered after 2 weeks, but several months later she had another seizure. She seemed to recover again, and Teresa got medicine for the seizures. But on the first night Teresa was to give Promisi the medicine, the child had a stroke.

It happened during supper. Teresa had gathered her five children on the veranda and was about to serve them a plate of greens with steaming "nzima," a porridge similar to a corn cake. "Promisi was walking, getting food," says Teresa. "I heard her scream and turned to see what happened."

Teresa knew instinctively that this seizure was different. "[During her other seizures] she used to nod her head; her arms and legs would move, but this time she screamed … and then collapsed. It was a stroke." The stroke left Promisi paralyzed and unresponsive at age 2½. 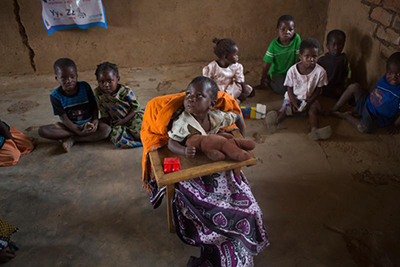 CRS helped provide Promisi a special chair so she can attend classes at the child care center in Nsanama Village, Malawi.

The once-active Promisi could no longer stand. She couldn't sit. Her neck was as weak as a newborn's. Teresa had no option but to tie her daughter to her back and carry her everywhere. Planting and working became almost impossible. Promisi could no longer attend the child care center because Teresa feared it was too much to ask the volunteer teachers to carry Promisi all day. Teresa had lost hope that her daughter would ever recover.

Then Promisi's father abandoned the family. Without him to help work the land, their crops failed and the family spiraled deeper and deeper into poverty.

One day Lucia Maele, a project manager from the Zomba Catholic Health Commission, a Catholic Relief Services partner, walked by Promisi's home during a routine visit to the child care center Promisi had loved. The community-run nursery school receives support through the THRIVE project, generously funded by the Conrad N. Hilton Foundation. THRIVE focuses on the health, nutrition and development of children in the critical first 5 years of life. Lucia saw Teresa carrying an unresponsive Promisi and approached her to see how the project could help.

It's 8 a.m. and almost time for school. After a quick bath, Teresa runs Promisi through a set of exercises as she does three times a day: she stretches the child's arms and crosses them, gently lifts Promisi's legs, and works with her to grasp at items. Lucia helped Promisi visit a physical therapist once a month and the child is progressing slowly but steadily: She can clutch toys in her left hand and now responds to sound. 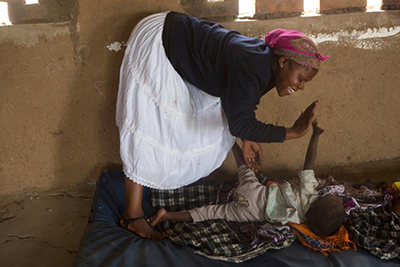 Loda Kachingwe, a volunteer teacher, plays with Promisi, who has become more responsive with therapy supported through a CRS program. Photo by Sara A. Fajardo/CRS

"The doctors say Promisi will walk again," Teresa says. "I believe that, even though sometimes I lose faith. This is my child. I must care for her and follow all the doctors' advice."

With her daughter freshly bathed, Teresa ties the child to her back and picks up the special wooden chair Lucia and CRS commissioned for Promisi through the Malawian government. The chair has a table that holds Promisi in place and allows her to sit up and participate in school and family life. The mornings that Promisi attends school also allow Teresa to earn income to support her family. She now earns $15 a month reselling vegetables she buys from local farmers.

Promisi's friends gather around her as Teresa sets up her wooden chair. She lovingly places "chitenge," a colorful cloth, on the chair for a little cushion, and then lowers Promisi into the seat. Loda Kachingwe, a volunteer teacher, beams and greets Promisi in a sing-song voice. She'd encouraged Teresa to bring her back and is glad to see her return. Children clamber to place toys on Promisi's small table.

"This chair is helping Promisi get stronger," Teresa says. "At first …, she couldn't sit or hold up her neck. Now she can do both. Coming to the CBCC helps her. She has begun to hear again. The noise at the CBCC motivates her. Going to the CBCC with this chair has eased so many problems." 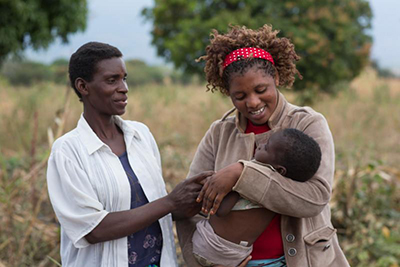 Promisi's friends take turns chanting the alphabet. "Well done, well done, sure," they applaud with each success. Promisi turns her head towards the singing, a smile of recognition flickering across her lips.

"We are seeing improvements in Promisi," Loda says proudly. "At first when we called Promisi, there was no response, … but now she'll smile and look our way. With the chair she can move around. She has freedom and is using her legs and gaining flexibility. We all hope that one day she'll 'wake-up' and be able to play with all her friends."