Malaria Tests and Treatment Save Lives in Benin

Adam Barnabas sits quietly on his mother’s lap, opening his eyes ever so slightly to take in his new surroundings. Nestled in a narrow corridor of a residential home in rural Benin, decorated with just a few faded posters and boxes, the 16-month-old comes out of his feverish daze when a needle pricks his finger. 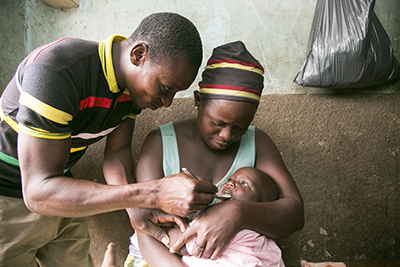 The drama subsides after a few minutes, giving way to a silent, uncomfortable moment while Simon reviews the rapid malaria diagnostic test.

“You have two possibilities—negative or positive,” he explains to the boy’s mother, Collette Amdouda. “If it’s positive, we can provide treatment for free.”

The malaria test and medication are free through CRS’ malaria prevention work in Benin, which aims to help more than 25,000 Beninese children just like Adam—children under age 5 from sub-Saharan Africa. Most of the 438,000 people killed worldwide by the mosquito-borne disease in 2015 were children living in sub-Saharan Africa.

A clear red line appears on the test. Adam has malaria.

Simon hands Collette a packet of pills and illustrations of how and when to distribute the medicine. He gives Adam the first dose immediately because children who receive treatment within 24 hours of a fever are much more likely to survive.

In the last  3 years, thousands of children have been tested and treated for malaria through CRS’ Palu Alafia, or Relief From Malaria, project, which brings medical care to remote locations. Malaria is among the 3 primary killers of children under 5 in Benin, and only 40% of people live close enough to visit government-provided health services. Community health workers in Gomez-Kparou village have tested more than 320 children since 2013, and 265 had malaria. 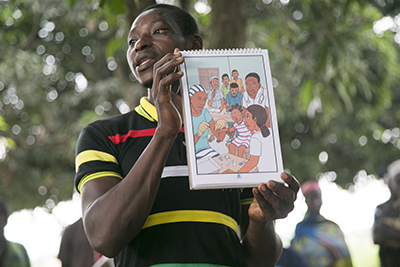 But testing and treatment weren’t as easy 3 years ago.

“Malaria impacts many children here, but at first, when we were told they would prick our children, we said ‘no way,’” according to Abdoulaye Mounira during a recent community meeting in the village. “But little by little we trusted them.”

Cultural misconceptions still prevent people from seeking care from the community health workers. So with private funds and support from the U.S. Agency for International Development Bureau for Global Health, CRS is researching culturally appropriate messages that will encourage people to seek malaria testing and treatment.

The project known as CATCH—Communities Accessing Testing for Child Health—is helping reduce the impact of malaria in Gomez-Kparou, where children were dying every month during the rainy season. That’s when mosquitos are breeding and malaria spikes.

“Every 3 months, we have a meeting with the community,” says Simon. The goal is to build trust and share information that helps promote better health at home.

Gomez-Kparou village has already noticed changes. “Women don’t have to go to the hospital as often, and there aren’t as many deaths,” says Abdoulaye. “With testing and medication, our children can recover and I can work.”

Some 300 community health workers have been trained to support the CATCH project in 100 villages like Gomez-Kparou across the country.

“I love seeing the children in good health, going to school. And parents can go to work, since the kids are healthy,” says Simon.

As for the future, Marie says, “I want to see the village grow, but it can’t grow without children. They need to be healthy and strong.”

We seek daily renewal from the source of all life, and so we pray ... END_OF_DOCUMENT_TOKEN_TO_BE_REPLACED

Our walk with God is reflected in our walk with others, and so we pray ... END_OF_DOCUMENT_TOKEN_TO_BE_REPLACED