As the world responds to the COVID-19 pandemic, channeling vast resources into prevention and treatment measures to stem further spread of the virus, the progress made in eradicating diseases such as malaria risks being undone.

Malaria has historically struck economically and socially disadvantaged populations. No one can completely protect themselves, rich or poor, but people living in poverty—particularly infants, children and pregnant women—are proportionally more vulnerable, often without the means to be tested and treated.

With government health systems overwhelmed by COVID-19 cases, those same populations most at risk of falling sick from malaria will also suffer considerably under this new global health threat. These populations may live in congested urban areas where physical distancing is difficult and access to clean water for hand washing is not always a given, or in rural areas where access to health services for diagnostic testing and treatment can be limited. 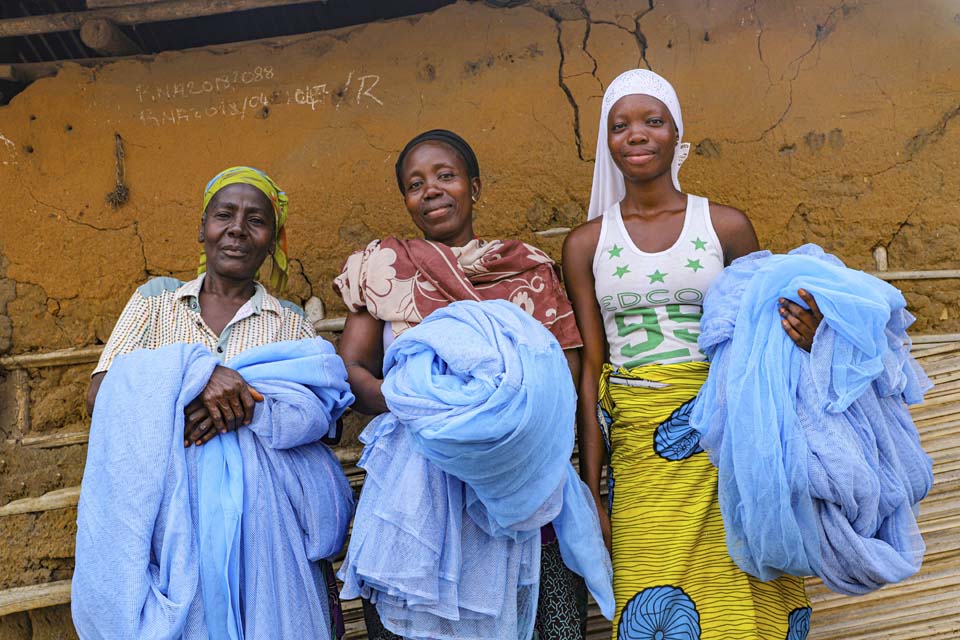 While scientists race to develop a vaccine for this deadly new coronavirus, it is possible to continue the battle to end malaria, which can be successfully treated. Ongoing efforts to reduce the impact of malaria  mean saving over half a million lives each year and improving the livelihoods of hundreds of millions of people who will be protected from malaria—particularly young children and pregnant women in Sub-Saharan Africa who bear the heaviest burden of the disease.

CRS partners with the Global Fund in 27 countries around the world and with national governments on malaria prevention and treatment programs by helping them build stronger health systems. In 2019, CRS’ malaria projects reached 86 million people in 12 countries, with a special focus on children and pregnant women.

Tackling the threat of these two killer diseases is a challenge that many countries are now facing.

With support from the Global Fund, CRS has been hard at work for many months helping Benin’s National Malaria Control Program to digitize the distribution of over 8 million insecticide-treated bed nets to dramatically reduce the burden of malaria on the population and on the health system. In Benin, over 2 million confirmed cases of malaria and over 2,000 deaths were recorded in 2018.

As COVID-19 advances around the world, CRS in Benin works with the government to establish hygiene protocols to prevent the spread of the virus during distribution of mosquito nets. By quickly adapting to door-to-door distributions to avoid gatherings at distribution points and by adopting physical distancing and hygiene behaviors, community health workers can safely deliver sufficient nets to protect 13 million people.

“In the context of COVID-19, the government of Benin confirmed the importance of the fight against malaria by maintaining the national distribution,” says Elijah Egwu, CRS senior program manager who oversees our efforts on this project in Benin.

CRS is training staff and partner staff on COVID-19 and ways to protect themselves and others from contracting the disease, while continuing our efforts to prevent, diagnose and treat malaria among rural populations.

“Our goal during the outbreak of COVID-19 is to ensure universal coverage of treated nets to all households in Benin to protect the population from malaria transmitted by mosquitoes and reduce the number of malaria cases,” says Egwu. “An added strain on existing health resources could overwhelm the health and clinical system within the country, hence the important decision being made to go ahead with this distribution.”

As CRS supports the national malaria program to digitize the massive mosquito net distributions in Benin, we also work at the grassroots level to support community health workers as they provide early diagnosis and treatment of malaria for children.

“As part of the community-based malaria work that CRS implements through support from the Global Fund, we work with 2,748 community health workers who deal with malaria cases in children under the age of 5,” says Hervé Gbegnide, project coordinator for CRS’ community based malaria project. “They also undertake awareness activities focused on community-level behavior change that will support the fight against malaria in 25 municipalities across the country.”

Even with the looming threat of COVID-19, Benin’s National Malaria Control Program realized it was imperative to continue malaria testing and treatment at the community-level as an essential activity that saves lives. CRS quickly developed a contingency plan that was approved by the National Malaria Control Program, the prime recipient of the Global Fund award. It then integrated testing and treatment protocols for COVID-19.

“We are training and equipping community health workers to adopt protective measures that will allow them to continue safely treating children for malaria, says Gbegnide. “All these measures make it possible to respond to COVID-19 by avoiding the spread of the disease among staff, among community health workers and the communities where we work to ensure the continued treatment of malaria cases.”