"They taught us things and we saw the results. My crops increased, and so has my income." 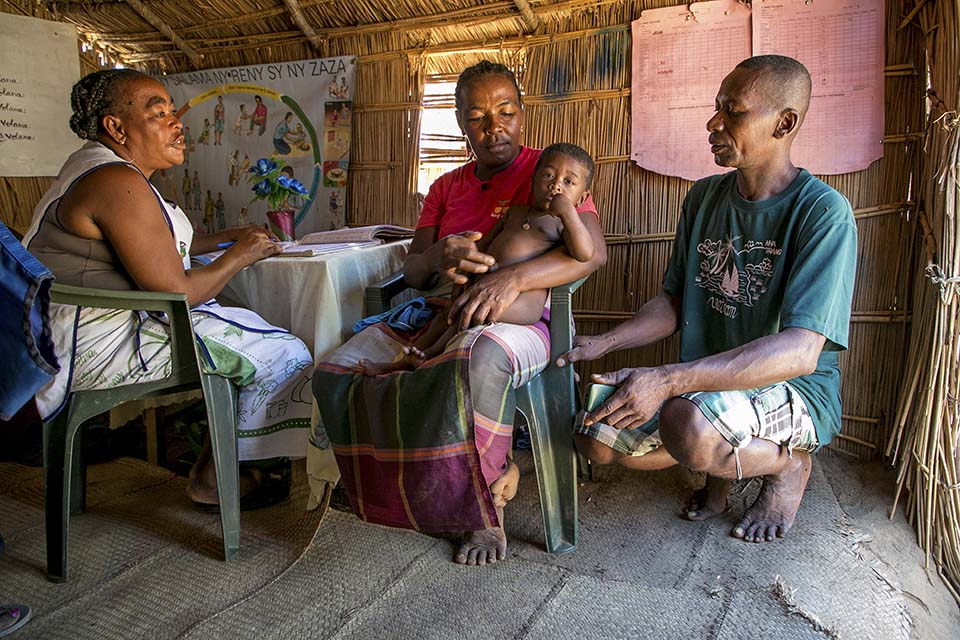 Germaine Raharisoa talks to Frankline Fanomezantsoa Rasoanandrasana and her husband, Labaladezy, about nutrition after a monitoring visit for their son, Thorin.

Today, half the children in Madagascar are chronically malnourished. Infant mortality, heavily affected by malnutrition, is a staggering 40 per 1,000 births. The country has the 5th highest stunting rate in the world. And, along with the loss of individual lives and families’ anguish, malnutrition directly affects the health of the entire country. In fact, the World Bank estimates Madagascar loses more than $720 million in GDP to vitamin and mineral deficiencies alone.

CRS is committed to reducing malnutrition and all its ill effects. And we have good reason for optimism. While an infant mortality rate is very concerning, the encouraging news is that the rate is half what it was in 2000. We want to see it drop further and faster.

Thorin and Marela are two Malagasy children whose stories illustrate our work among the poorest families in the country. Their lives show that malnutrition can be overcome and that better diet is only part of the story.

In the United States, it is typical for a newborn baby to see a doctor about ten times in their first year. In southern Madagascar, health care primarily rests with the parents. They need to know the signs of malnutrition. We help them monitor their children’s health and work together as a community to make sure they are providing the best care and conditions for children to thrive.

Thorin, 11 months old, has a strong grip. He reaches out to grab the sling scale he is placed in for weighing. Thorin, his mother, Frankline Fanomezantsoa Rasoanandrasana, and father, Labaladezy*, are at the community health worker’s office in Miary Betsileo village, southern Madagascar, where they live. This is Thorin’s fourth scheduled visit to the health worker and part of an innovative program that is helping communities keep their children healthy.

In 2016, as part of the USAID-funded Fararano project, Catholic Relief Services introduced the community-led total nutrition program to Thorin’s village. The program focuses on mobilizing people in communities to adopt behaviors that improve nutrition for children who are five years old and younger. CRS works with government community health workers and community volunteers to teach communities optimal health and nutrition skills and habits. 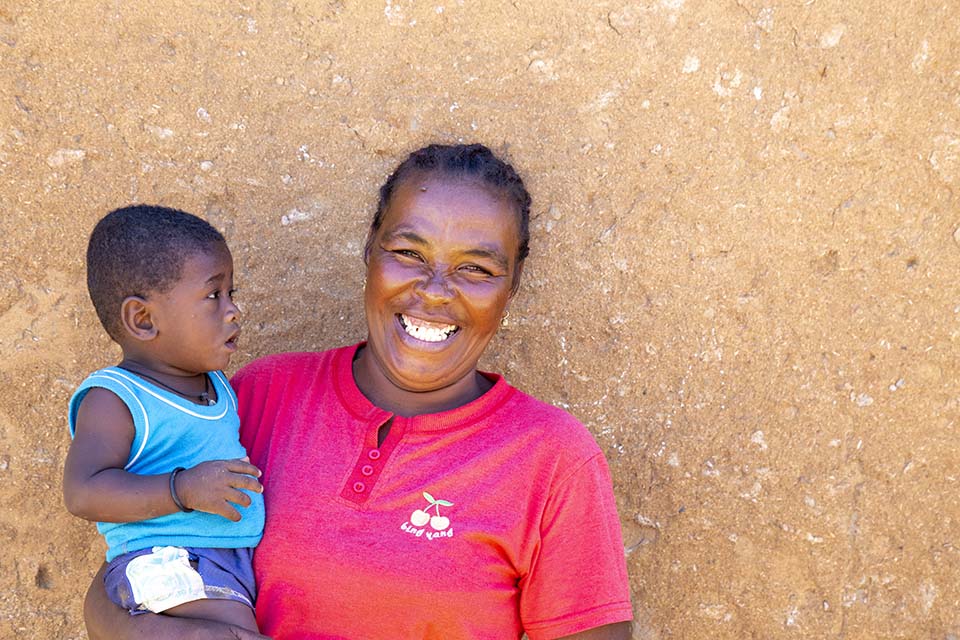 Frankline Fanomezantsoa Rasoanandrasana, and her son Thorin, in Miary Betsileo village, Madagascar. Frankline is a lead mother for the USAID-funded Fararano project. She helps and encourages other mothers in her community to practice good nutrition and proper hygiene.

Frankline and Labaladezy are old hands at raising children. Thorin is their eighth and youngest child. There is something unusual about Thorin, though. He is chubbier than his older siblings were at that age and he falls ill less often.

Thorin is healthier because his parents practiced the new skills they learned through the Fararano program. They harnessed support from the entire community after their village was mobilized through the nutrition program.

While she was pregnant, Frankline went to the health center regularly for check-ups with the doctor. She practiced proper hygiene and exclusively breastfed Thorin for six months. When Thorin started eating solid food, his parents fed him a diverse diet, which included vegetables and protein. These are things they did not do with their other children.

“He hasn’t got many diseases so far compared to his other brothers and sisters. He looks stronger. He has more flesh than his siblings,” says Frankline.

There are three recurring phases of the community-led nutrition program. In the first phase, CRS-trained community health workers carry out diagnostic and screening sessions for children to gather useful information about their health. During the second phase, community volunteers take the information from the screening and discuss it with community members using skits, puppet shows, and other interactive activities. The puppet shows are particularly entertaining to watch. Even stern-faced men smile and respond when the puppet asks them questions.

The interactive activities teach families simple, effective ways to improve their children’s nutrition and health. The approach involves all community members in activities making it easier for families to eat healthier, practice proper hygiene, earn more money and ultimately fall sick less often, while gaining support from the community as a whole.

The final phase involves screenings for children every three months based on indicators the community agrees on. Tri-monthly screenings help families track changes in the nutrition of their children and provide information the community can use to make changes if necessary. This has made a very real and noticeable difference in the health of children in villages like Miary Betsileo.

Frankline is now a community volunteer supporting other families to live healthier lives. She trains other mothers in the simple methods she used to ensure that Thorin is a healthy baby. Frankline felt supported by her community as she practiced the new things she had learned.

“I'm really proud to be one of those who can spread all these messages,” Frankline says.

One unexpected benefit for Labaladezy, Frankline’s husband, is that his relationship with his wife has improved. Before, Labaladezy and Frankline argued about every little thing. In gender sessions that are part of the program, they learned how to manage conflict and work together to achieve goals that will benefit the family. Now they get along much better.

“Whenever I felt that my marriage was drowning, I would go to the gender leader and ask for advice,” Labaladezy says. “We learned to communicate and have a simple dialogue. This is something we didn't do before. This really changed our marriage. How can a project related to food improve this side of my life? I can't explain it, but it really did.”

“Rainbow foods” is a phrase you hear a lot as the people who participate in the nutrition program in Miary Betsileo village talk about what they have learned. This is a simple way to emphasize the importance of eating colorful vegetables like tomatoes, pumpkins, carrots, green leafy vegetables and other high nutrient produce.

Community volunteers taught Valérie Aimée Raharisoa, a mother of four in this community, climate-smart methods to plant vegetables in her garden close to her home.

“We used to cook very simple dishes before. I learned that there are a lot of things that I can mix and combine. I can add greens to the cassava I’m boiling. Some oil or a little tomato or other greens that smell good, like basil, changes the flavor. This is what I learned—how to mix the ingredients that were already in front of my eyes,” Valérie says. 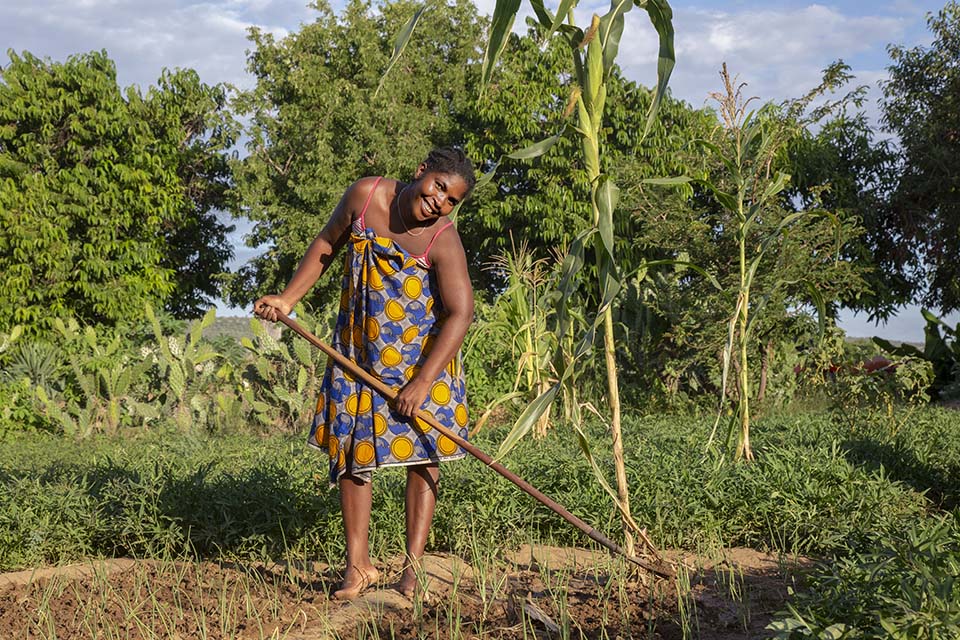 Valérie cooked a meal with pumpkin, green leaves, tomatoes and other vegetables. Her two-year-old son, Marela, ate a bowl full.

“It is really the discovery of multiple flavors that motivated me. As you can see, my son a few minutes ago finished his dish. It's really because the flavor is quite different from the flavor he is used to.” 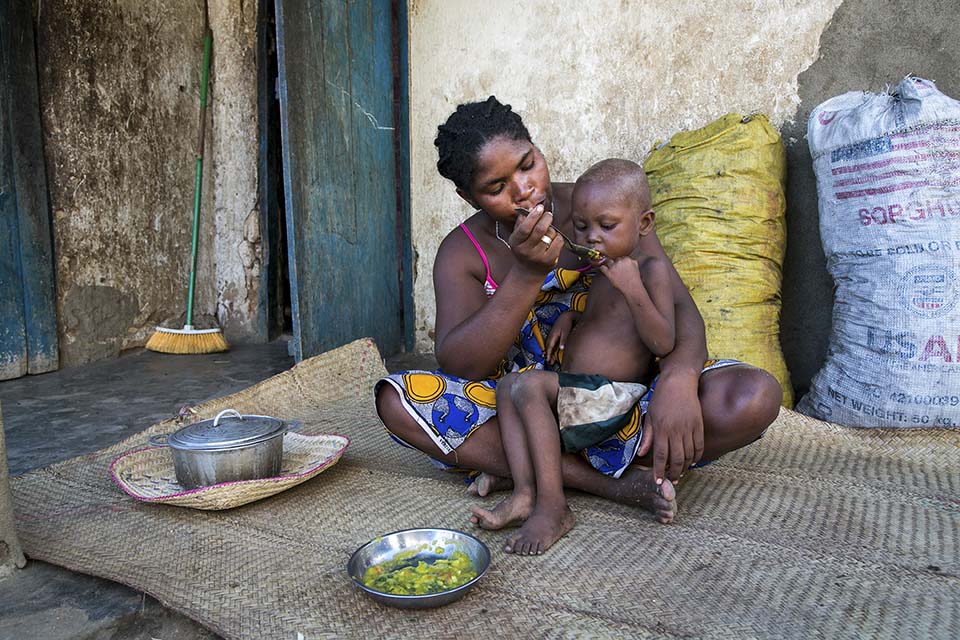 Valérie Aimée Raharison, feeds her two-year-old son Marela, one of her four children. Valérie participates in CRS’ USAID-funded Fararano Project, which has taught her cooking techniques to improve nutrition for her and her family.

Even families who have farmed for generations are learning new ways to cope with lower rainfall and other climate events in this part of Madagascar.

“We were raised farmers, we thought we knew how to farm. Then these people came with a lot of farming techniques. At first, we thought, ‘Why would they teach us what we've done for a lifetime? In every generation, we’ve farmed. Why will they know more than us?’ But they knew more than we did. They taught us things and we saw the results. My crops increased, and so has my income,” Valérie says.

The gardens provide families with diverse, nutritious food and are also an additional source of income. Valerie uses the extra money from selling her garden produce to pay school fees for her children, make improvements to her home, and saves for the future.

Germaine Raharisoa is a community health worker in Miary Beitsileo. For decades she saw a problem in the village—children were sickly and dying. Women were also dying during pregnancy. People in the community blamed fate or God for the deaths and turned to the traditional healer for help when they or their children fell ill. There was always a long line in front of the traditional healer’s house because so many people were ill. 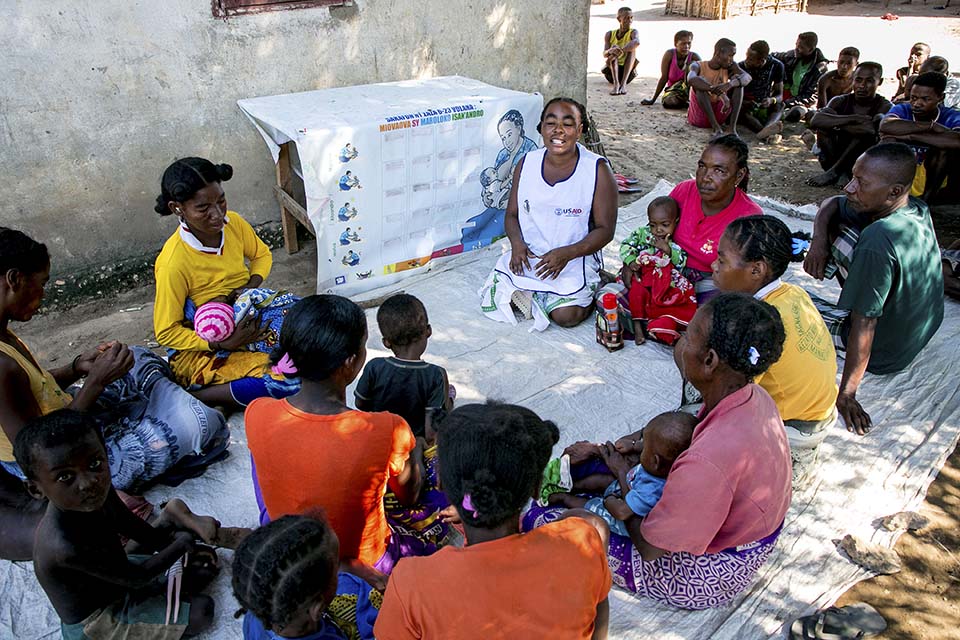 Every day of the work week, Germaine resumes work in her office, a little straw hut in the middle of the village. Throughout the day, she talks to mothers about their health and the health of their children. She refers difficult cases to the health clinic. For a long time, she saw very little results. Parents trusted the traditional healer more. Children and mothers continued to fall sick, and some even died.

In 2016, CRS trained Germaine and other community health workers like her to help communities to take better care of their children. Teaching communities the methods she learned, Germaine began to see changes.

She worked with volunteers to meet with community and traditional leaders, mothers, and fathers. One of the most important things she tried to change at the beginning was hygiene-related behaviors like open defecation. Cultural norms meant that families did not build latrines.

As a woman talking to predominantly male leaders, it was difficult to change mindsets. Germaine convinced one community leader to build a latrine, and other members of the community followed. Gradually people listened and changed. The community learned how diet and cleanliness affect the health of their children and began to work together to improve nutrition and hygiene.

Germaine is happy that her hard work is paying off. She is proud to see community members using the skills they learned through the nutrition program to work together and provide more nourishing food and a clean environment for their children to grow and flourish.

“The first year when the project started, we had more than six malnourished children each month. After the program started, we have seen fewer and fewer malnourished children. Also, because I could get all the mothers of this community to go to the health center regularly every month to monitor their pregnancies, the number of pregnancy deaths have reduced to zero for the past two years,” says Germaine.

Through the community-led nutrition approach, communities get the knowledge, skills, and resources they need to pull together, encourage, and support each other to keep their children alive and healthy, complementing other household and individual actions promoted by Fararano.

The community-led total nutrition program is part of the Fararano project which, is funded by the U.S. Agency for International Development Food for Peace Program. The project aims to reduce food insecurity by preventing malnutrition in children under five years old, increasing household income, and improving the capacity of communities to manage shocks such as droughts, floods and pest attacks.

*Many people in this part of Madagascar have only one name

August recess is a key moment to meet with your members of Congress while they are out of session... END_OF_DOCUMENT_TOKEN_TO_BE_REPLACED

Use this calendar for key dates to reflect and take action with your community to address climate... END_OF_DOCUMENT_TOKEN_TO_BE_REPLACED