Living the Gospel, Sharing the Harvest

Photo by Heidi Yanulis for CRS

In the Gospels, the Lord returns to the symbolism of the harvest again and again. The Kingdom of God is like a harvest—wheat will be separated from chaff. To the agrarian communities of the ancient world, few symbols were as powerful as seeding the soil, caring for the crop and harvesting the fruit of one's labor. 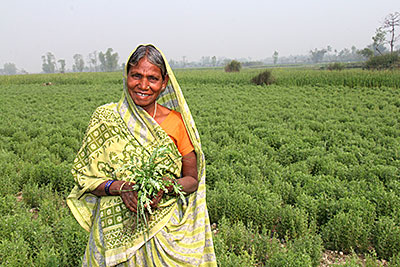 CRS is helping farmers grow strains of lentils and rice that will flourish through alternating cycles of drought and flood. Photo by Jennifer Hardy/CRS

Few things—a plague, an advancing army, a blessing on a king—could make a community turn to God like the desire for a bountiful harvest. The heartbreak of a failed harvest, though, was cruel in its slowness. For farmers, the bad news would come gradually, with each day of dryness or the first appearance of a blight, and eventually the picture of the year ahead would dawn on the farmer: poverty, hunger, suffering, the destruction of families and communities.

In developed countries, technology, irrigation systems and market approaches have made many farmers more resilient. But in the developing world, the ancient struggle continues and the cycles of the year have remained much the same: plant, work and hope. And, of course, turn to God.

And so, Catholic Relief Services works to close education and technology gaps and to introduce farmers to new crops, new techniques and fairer access to marketplaces. Working at the grassroots level with communities across the globe, CRS gives farmers leverage against the fickleness of droughts and deluges, pestilence and exploitative markets.

So it is in Malawi, where chili farmers have multiplied their income tenfold, finding leverage with buyers by bringing their crops to market in groups.

So it is in Guatemala, where CRS is helping coffee farmers outsmart leaf rust rust through better soil management and more diversity in what they cultivate.

So it is in Madagascar, where we use iPods to streamline and safeguard seed distribution, improving efficiency following devastating cyclones, and providing data to help protect against future calamity.

So it is in the Philippines, where we work with local farmers who are learning entrpreneurship and entering new markets.

In the Northern Hemisphere, we've long associated fall with harvest time, and so we choose this month to feature CRS agricultural programs and turn our prayers toward the harvester. But of course, with various crops, various climates, multiple-harvest crops and the inverted climate cycle of the Southern Hemisphere, it is always harvest time somewhere. CRS is never not thinking about harvests. And we're never not working with farmers to help them produce more abundant harvests.

In Isaiah, the Word of the Lord is likened to water from Heaven that will not return until it has watered the Earth and produced bountiful harvests. Because you've heard that Word, the work goes on. Thank you.