“I have been helped and have been asked to help others, so I am happy to give goats to the next household.”

Nganichi Kiringn has struggled to provide for her children ever since her husband was killed and their cattle were stolen in 2012. Over the past two years, heavy flooding has made matters worse, uprooting her family and destroying their home.

“We moved to another area that was on higher ground. All our property was lost, like the cooking pots, utensils and even the house,” says Nganichi, who now has five children. Until now her only income has been from selling firewood and charcoal. 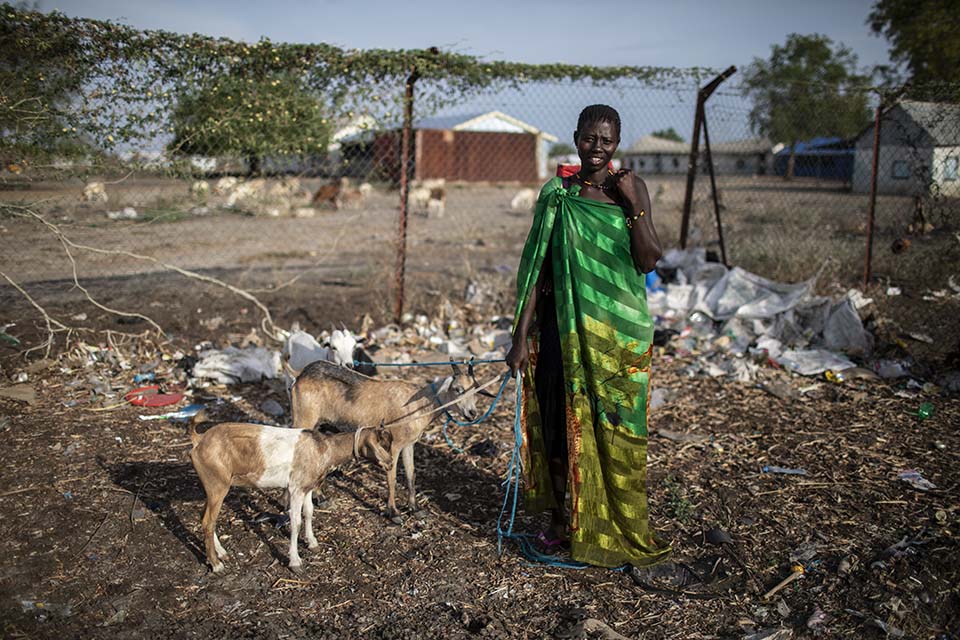 Nganichi Kiringn, a widow and mother of five, tends her new goats.

Nganichi was able to participate in a program that aids vulnerable women and youth in the acquisition of goats or sheep. Participants exchange vouchers to purchase three female goats or sheep from local vendors at livestock fairs organized through the Resilience and Food Security Program, which is funded by the U.S. Agency for International Development. The goal is to help vulnerable families build and grow productive assets, which can provide a level of insurance against potential financial shocks.

At a recent livestock fair in Pibor town, Nganichi used her vouchers to purchase three goats.

“These goats will help me feed my children because they are three lactating goats.” In addition to providing milk, goats are a valuable asset that can be easily sold when the family needs cash. “When the goats multiply, we can sell the male goats and use the money to buy things in the market, for example medicine or different kinds of food,” Nganichi says.

After one year, each recipient pays forward the gift by providing another vulnerable member of their community with three female goats or sheep. Nganichi appreciates the importance of helping another person in need.

“There are many women like me who have lost their husbands. They are in dire condition,” she says. “I have been helped and have been asked to help others, so I am happy to give goats to the next household.”

Much like Nganichi, 30-year-old widow Karog Lonyi has grappled with poverty following the death of her husband, recurring floods and intercommunal violence.

“I lost my harvest because the flood came when the maize was almost ready for harvest. The flood took the farm and some grain that had been distributed,” she says. Ten cattle and 15 goats were also stolen during raids.

“I used to milk the cows to feed the children. But when the cows were taken, life became difficult. That is when I began to struggle all the time to get food for the children,” she says. “Sometimes my children will go without food if I don’t sell charcoal or firewood, or if I fail to get money from selling tea in the market.” 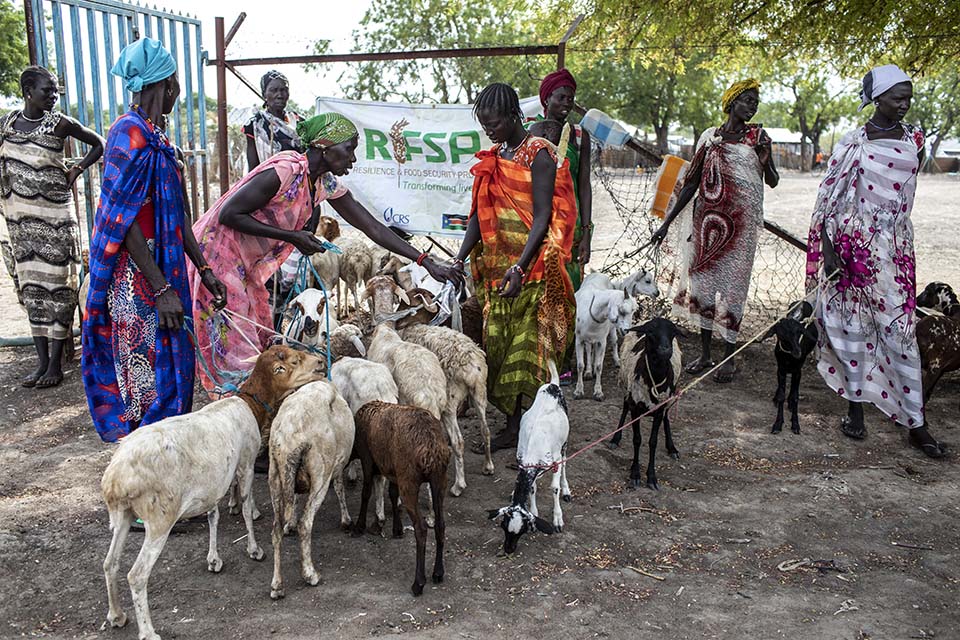 Women receive goats and sheep at a livestock fair.

“I could not afford to buy three goats on my own, so I am going to take good care of these goats. Next year, you will see the difference. The pregnant goat and the other two goats are going to give birth if I take care of them well. They are going to give me a lot of kids,” Karog says.

“I have many plans for these goats. I will use the milk to feed my small baby. When the goats grow in numbers, I will sell the male goats to pay for school fees and for medicine for my children whenever they fall sick. I will also use some money to buy goods to start a business. If I get enough money, I will open a shop. If I save a lot, I will even buy a cow,” she says.

The program also supports vulnerable youth. Since 2016, it has helped 964 women and 120 youth to acquire goats in Jonglei state. This support can ultimately help improve their livelihoods and economic status. 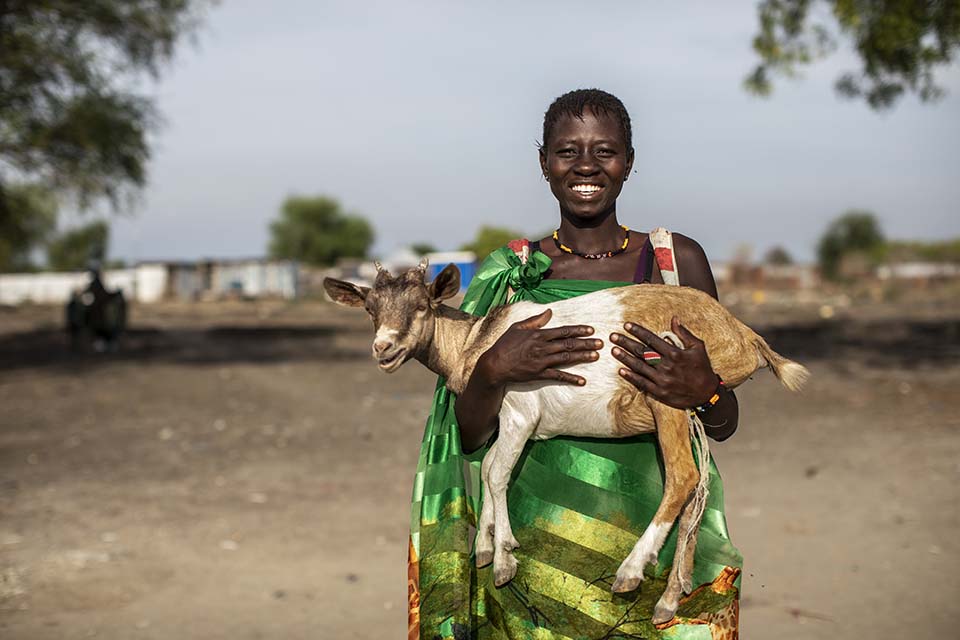 Nganichi Kiringn, a widow and mother of 5, poses with her new goat.

Deng Reath, a resident of Pajut, in east central South Sudan, was selected for the program because he is partially disabled. Deng was shot in the hand and arm four years ago when gunmen carried out a raid, stealing five of his cattle.

“My hand doesn’t function very well. It is not very strong, so I can’t use it,” he says.

Meanwhile, Deng has a family to provide for. Until now, their only income had been selling firewood and they would often eat only one meal a day. Deng plans to use the goats primarily for milk to feed his family and to sell some in order to buy other goods.

“If I keep my goats safe, and they produce more goats, then I know my life will change,” Deng says.