A Lifetime of Service

He really should charge admission. To spend a few fleeting, but enlightening moments with Michael Wiest over lunch is a pleasure and a privilege. Stories from his 37-year career at Catholic Relief Services come tumbling out with ease and pride.

At Michael’s encouragement, former CRS staff gather a couple times a year at a restaurant in Baltimore. A unique bond of experience and a love of the agency attracts alumni to come from around the country. The most recent meeting was the 29th such gathering and brought all sorts together—currently active, retired, those who have transitioned to different work, family and friends. 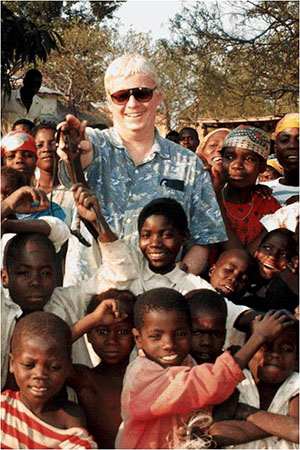 Michael Wiest’s career at CRS spanned 37 years. Here he is in1994, in Kigali, Rwanda, with children orphaned by the Rwandan genocide.

Contrary to what you might expect, and perhaps because those who have worked for CRS understand each other’s experiences so well, they don’t often discuss their past.

“We really don’t exchange war stories very much, or for that matter, discuss too much of our histories. Rather, we ask about each other’s kids and spouses, what we are doing in retirement, any recent travel, etc.,” Michael says. “We also discuss, from time to time, our recently departed colleagues. That said, under the surface there is always the awareness that we have shared a profound and memorable life experience. And it is that unspoken awareness, I think, which brings us together. We all know that we were part of something special.”

Some former staff devote their entire careers to CRS while others just a handful of years, but the consensus is that their time spent with CRS was the most meaningful time in their professional lives. And the reason is because those who serve at CRS appreciate the fact that they have been able to make a difference in the lives of vulnerable people when they were suffering the most. Whether they spent their entire adult life with CRS or a half-dozen years in partnership with other charities, they know that CRS is the gold standard of humanitarian relief agencies around the world.

Michael Wiest is a champion of the CRS history that he revels in. With 20 years overseas, and another 17 at CRS headquarters, Michael has accumulated a treasure chest of lore.

For instance, there was the time that a prominent official in Burkina Faso helped himself to a million dollars of funding meant for CRS, taking a big bite out of the programs that were doing good work throughout the country. Mustering his finest diplomatic prowess, Michael approached the head of the country and requested the money be returned.

The country’s leader asked the parliament to reinstate the missing funds but, in a country where political divisions and corruption were a fact of life, there was little sympathy—until the leader asked the assembly, “Who among you received an education and enjoyed a school lunch because of CRS?” Everyone in the distinguished body raised their hands and the money was returned.

No doubt, everyone who has CRS on their resume can share wonderful behind-the-scenes stories of their own. Take some time to learn more about CRS’ 75 years of history now.

We seek daily renewal from the source of all life, and so we pray ... END_OF_DOCUMENT_TOKEN_TO_BE_REPLACED

Our walk with God is reflected in our walk with others, and so we pray ... END_OF_DOCUMENT_TOKEN_TO_BE_REPLACED