When the Ebola outbreak hit Liberia, seasoned health care workers were taken by surprise as an unfamiliar disease erupted on an unprecedented scale. Hospitals and clinics were among the casualties. Many had to shut down, limiting access to immunizations and treatment for malaria and other common diseases. Health facilities that stayed open were surrounded by fear and stigma. 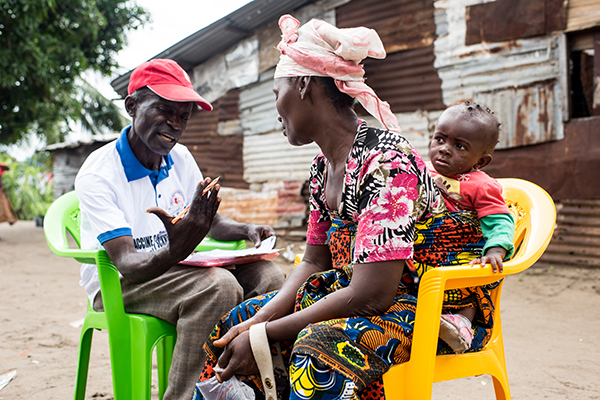 Wonplough Weah, a community health volunteer in Liberia, encourages parents to visit health clinics and have their children vaccinated. Photo by Michael Stulman/CRS

“During that time, people would go and not come back,” says Elizabeth Bestman, who only recently brought her child to a health clinic for immunizations. “I was scared the hospital would take me.”

Three years after the Ebola outbreak, Catholic Relief Services is helping people recover from its devastating effects. Our primary focus is ensuring health facilities are more resilient to unexpected shocks like Ebola, and that community volunteers can maintain—or quickly rebuild—community confidence in the health system.

To restore trust between communities and health clinics, Wonplough Weah, a volunteer with the Liberia Immunization Platform supported by CRS, goes door-to-door to promote a simple message: “Vaccines are safe and will protect your children from contagious diseases.”

Wonplough visits about 25 different communities, 10 to 15 homes a week, on foot. He encourages mothers and fathers to bring their children to health facilities, and helps them keep track of their children’s vaccinations.

“When vaccines aren’t regular, there can be a big risk,” he says.

“We’ve learned a lot from these volunteers,” says Veronica Wleh. She has seven grandchildren who have all been vaccinated.  “I grew up in a rural area,” she explains. “So, I didn’t know about vaccines. People used to get measles and polio all the time.”

With funding from Gavi, a public-private partnership bringing vaccines to children in the poorest countries, CRS is helping 125 volunteers in the Liberia Immunization Platform reach more than 35,526 households.

“Today, I can see the difference. People are returning to the health facilities, and the services are better now, after the Ebola outbreak,” says Wonplough. 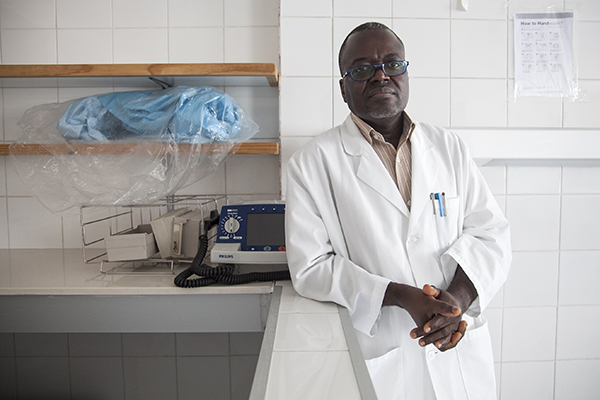 If there’s a silver lining from the Ebola epidemic, it can be found inside St. Joseph’s Catholic Hospital in Monrovia.

It had been closed after 15 health care professionals tested positive for Ebola. Dr. Senga’s colleagues—three religious brothers, one sister, two nurses, one X-ray technician, one lab technician and one social worker—were killed.

Dr. Senga said the hospital staff was essentially “wiped out.”

He remembers what he said while the hospital was closed: “In one year from now, I’d like to see the hospital better than before. We should all learn from this outbreak and improve the health care delivery to the patients.”

His vision has come true.

CRS supported the construction of a triage center, a screening point for everyone entering the hospital. Anyone suspected of having an infectious disease is placed in isolation until further testing, rather than being admitted to the hospital immediately at the risk of other patients.

Health care workers eagerly provide essential services. With support from CRS, they participated in months of planning and training before the hospital reopened.

“Now we have those skills that will help us provide care, with safety to ourselves and the patients,” Dr. Senga says.

Liberians have endured many hardships—including a long and devastating civil war, as well as the more recent Ebola crisis. Both dealt significant blows to their health system.

“Ebola proved the resilience of the people,” says sister Barbara Brillant, an American missionary who has lived in Liberia for more than 35 years.

There’s still a lot of work to be done to improve health systems in Liberia, but you can’t discount the will of the people.

Read the latest update from CRS country programs and partners around the world as they respond to... END_OF_DOCUMENT_TOKEN_TO_BE_REPLACED

Read the latest two-page summary from CRS country programs and partners around the world as they... END_OF_DOCUMENT_TOKEN_TO_BE_REPLACED