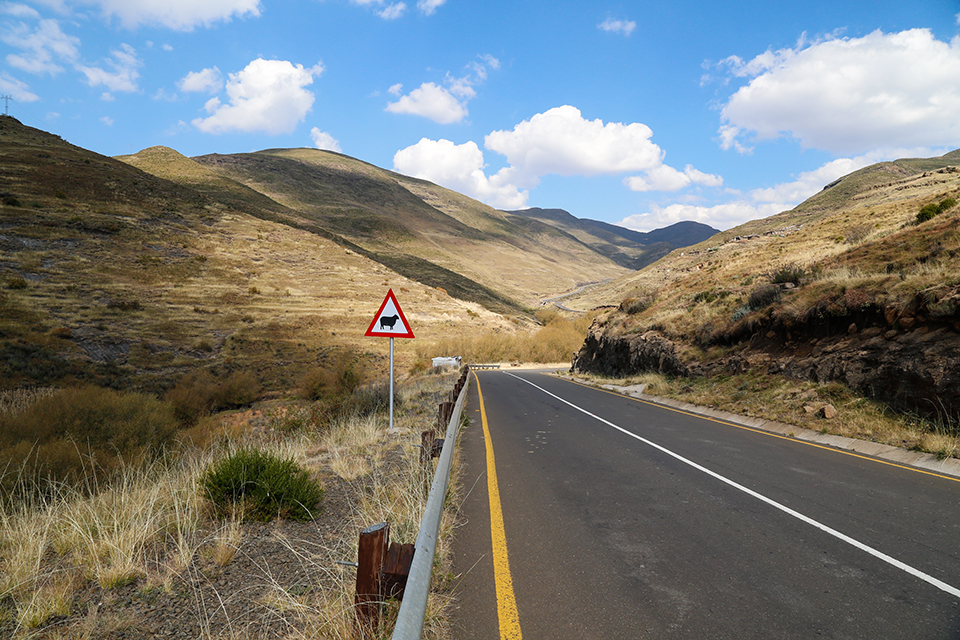 Lesotho is starkly beautiful, but poverty and lack of development mean many of its people must migrate for work, leaving children behind. Photo by Nancy McNally/CRS

The stifling poverty of Lesotho taints almost everything in this small mountain nation. To survive, many leave home for jobs in the much larger and much wealthier country that surrounds it—South Africa.

Much of Catholic Relief Services’ work in Lesotho is focused on those left behind—the children. As the country’s future, they have the opportunity to break with generations of systemic poverty. A step in that direction is quality daycare for children under age 5 provided by a CRS-funded program called Whose Child is This? It is supported by the Better Way Foundation.

Lineo Mathetha’s story shows what an impact child care can have. Her parents both work in Port Elizabeth, South Africa. Her father works at one of the city’s many wool-washing factories, cleaning luxury mohair and merino wool. Her mother is a supermarket cashier.

Lineo is cared for by her grandmother, Matlali Khoele, who has raised five children of her own. The youngest is finishing up at a boarding high school. When Lineo was preschool age, both she and her grandmother, along with other families in the Thaba-Tseka area, enrolled in the CRS program.

While Lineo participated in preschool and received a healthy meal—important in a country struggling with childhood malnutrition—Matlali learned about preparing nutritious meals and snacks, and about the benefits of positive parenting. 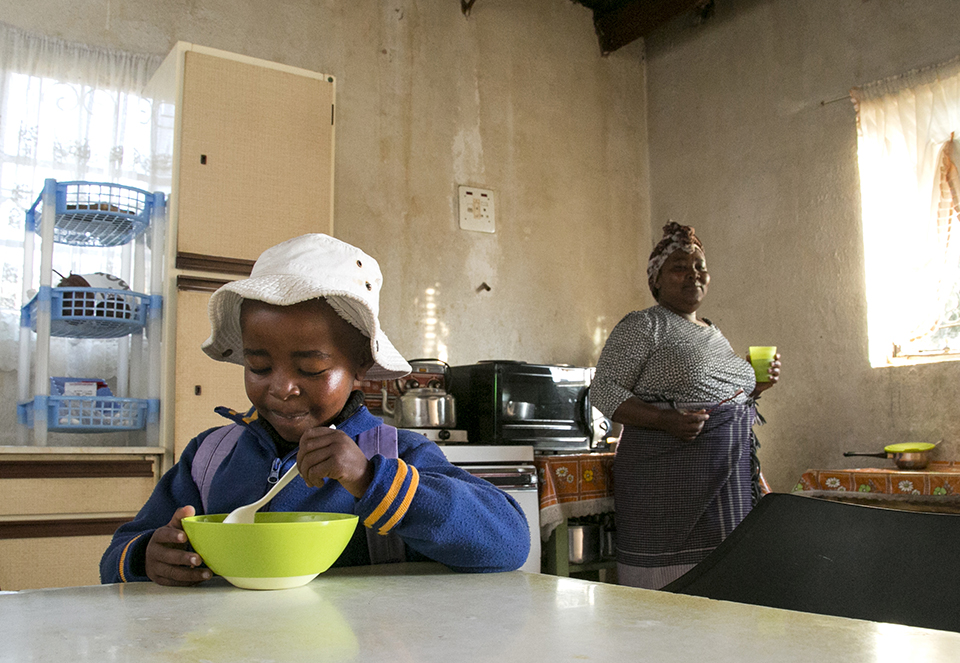 Lineo finishes breakfast as her grandma waits with a toothbrush at the ready before Lineo leaves for school. Photo by Nancy McNally/CRS

“When I was a parent myself, it was normal to beat a child to discipline them,” Matlali says. “With Lineo, if she does something wrong, I sit her down and talk to her about it. I’m gentler than I was with my own children.”

And she can see the difference in Lineo, who is now 6 and has moved on to first grade.

“Lineo is quick to learn new concepts and to understand, when others have difficulty and might have to constantly struggle to catch up,” Matlali says. “In addition, she relates easily with other children. She has had the time to build her social skills, while the children in first grade who never went to preschool are shy and a bit closed off.

“Lineo can take care of herself. She washes her hands and she already knows what to do. And she offers to help others or the teacher,” Matlali said. “My eldest two children didn’t go to preschool, and I can say there is a significant difference between my children who have attended daycare and the children who have not.”

And Matlali has learned valuable lessons too, which benefits her child. For example, instead of the cornmeal porridge—filling but lacking nutrients—that Matlali once prepared for almost every meal, she now makes healthier meals and snacks. When she does serve the cornmeal porridge, she mixes in vegetables or an egg. And she takes great pride in the peaches she grows, which she preserves for Lineo, along with other homegrown goodies.

Whose Child is This? complements an integrated early childhood and development initiative that is a priority for the Lesotho government in reducing poverty and promoting economic development.

For communities, Whose Child is This? holds periodic “child well-being days,” typically on weekends, with villagers assembling to learn about the range of services that fall under the wider umbrella of early child care and child health. Health screenings and vaccinations are offered, but much more is included.

“The police, for example, are there to tell us about the risks of child abduction and child abuse,” Matlali says. This awareness helps protect girls from child marriage and sexual exploitation. 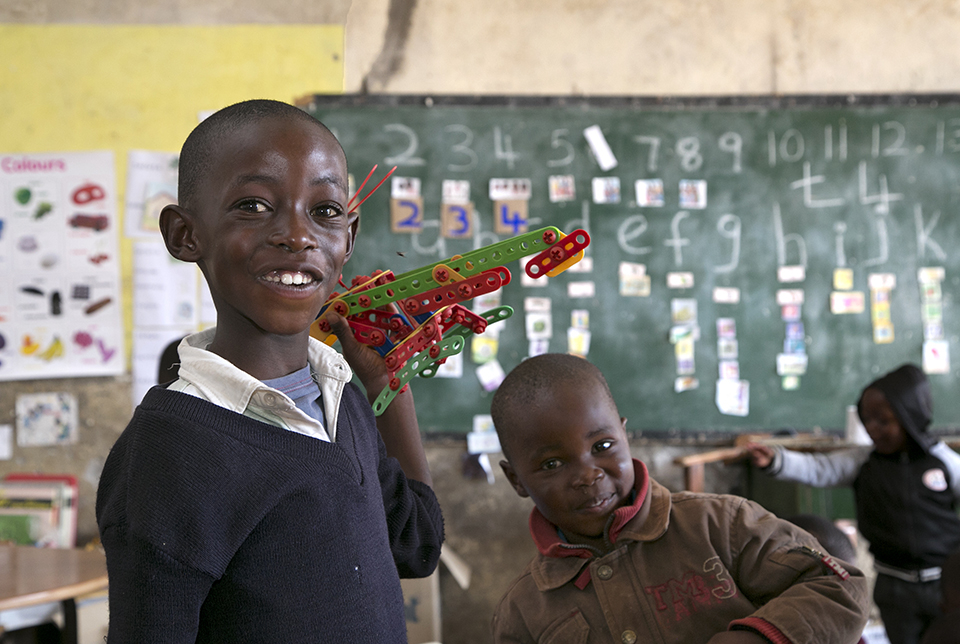 The program also works in partnership with the national ministry of education tostrengthen the skills and training of preschool teachers, who are few relative to community need.

One teacher at the Auray Catholic Mission in the village of Ha Nyane, where Lineo went to preschool, says she and her students have benefited from the training. When she graduated from high school, Matseliso Sethobane, now 26, was back at home looking for work, and the Good Shepherd Sisters—key CRS partners in Lesotho—offered her a job teaching at the Catholic preschool.

“I’ve gained in confidence in my public speaking skills, and I’ve learned to plan the day’s lessons and manage the children,” says Matseliso. She has also learned about hygiene and nutrition, passing these messages on to the children. And she now knows how to make toys, like puzzles, from readily available materials including cardboard boxes that families contribute. 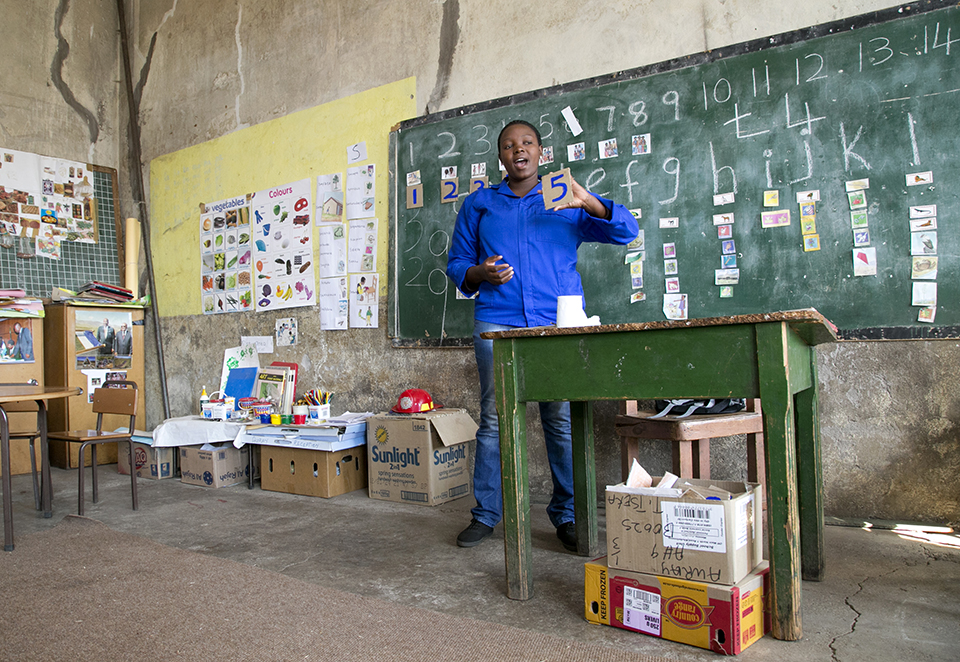 “The added qualification puts me a step ahead of others if I want to grow in this career,” Matseliso explains. There is a lack of teachers and, especially, a lack of qualified preschool teachers in Lesotho, which is one gap the project seeks to fill.

So, even as Whose Child is This? provides quality child care that benefits parents and their children, the project also helps  teachers in their careers. All this promotes the goal of helping Lesotho’s smallest children as they grow into the proud citizens who will help end the cycle of poverty in this unique—and uniquely placed—country.

We seek daily renewal from the source of all life, and so we pray ... END_OF_DOCUMENT_TOKEN_TO_BE_REPLACED

Our walk with God is reflected in our walk with others, and so we pray ... END_OF_DOCUMENT_TOKEN_TO_BE_REPLACED