One year ago, on June 18, Pope Francis addressed the Catholic Church—and the whole world—in his encyclical, “Laudato Si.” In it, he called for nothing short of an “ecological conversion.” 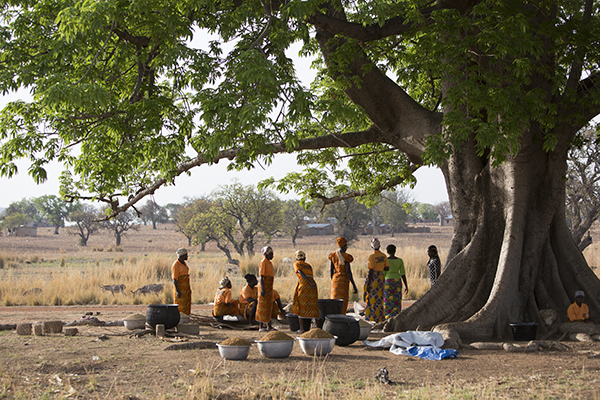 Members of a CRS-supported savings group process rice together in Ghana. The women began the value-added rice process when weather patterns changed and inhibited their ability to earn livelihoods through farming alone. Photo by Jake Lyell for CRS
Clearly, the Holy Father’s statements on climate change have had a near-immediate impact. Now just a year since “Laudato Si,” recent events offer evidence of its influence.

Among the reasons for the encyclical’s positive effects:

“Laudato Si” has been a key step in affecting wide-ranging cultural and economic practices, and its influence may persist over time. The pope urges everyone, not just world leaders, to recognize and act on this global crisis. And that’s where you come in.

Your voice is a gift. You can use it to further affect the U.S. Congress by echoing Pope Francis’ call to action. Make your voice a blessing to others by urging your representatives to support climate change measures.

Pray and reflect with your community on our call to respond to the needs of our sisters and... END_OF_DOCUMENT_TOKEN_TO_BE_REPLACED

Reflect on the impact climate change has had on our planet and pray for the Holy Spirit to change... END_OF_DOCUMENT_TOKEN_TO_BE_REPLACED