They are such simple things—variations on the type of small vegetable plots many of us have in our own backyards—yet keyhole gardens are having a profound effect on the lives of people in Lesotho, a small nation that's an "island" in the middle of South Africa. 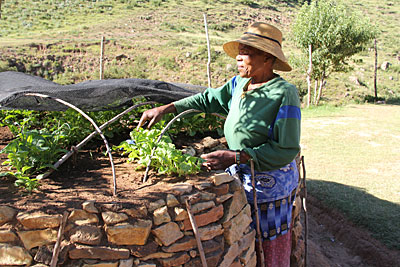 Thanks to keyhole gardening, introduced by CRS, Maabisi Phooko of Lesotho is able to grow vegetables year-round. Photo by Kim Pozniak/CRS
The raised, round-bed planters are bringing diversity to limited diets and supplying necessary nutrients often lacking among people who rely on staple crops like maize or sorghum. Especially in colder months when leafy crops have withered, starches are the mainstay of diets there.

And the gardens are doing more than putting food on the table: They are also putting cash in pockets.

Maabisi Phooko, a 71-year-old widow who cares for three orphaned grandchildren in the small village of Thaba-Sephara in Lesotho's mountains, first planted her keyhole garden in 2008 with seeds, tools and instruction provided through a Catholic Relief Services program. Lesotho's geography provided plenty of stones and other materials for building the raised beds. The structure, which retains moisture and heat, keeps the soil warm enough to guarantee a harvest even during the 4 months of the year when the country is subject to snow and biting frost.

"Winter and summer are the same," Maabisi says. "I have vegetables all seasons." She grows a variety of nutritious vegetables, including spinach, onions, carrots, rape and beetroot.

In a country where rates of stunting and chronic malnutrition in children can reach nearly 51 percent in mountainous regions, keyhole gardens have been instrumental in improving nutrition through dietary diversity.

"[My family] can eat at least three food groups per day," Maabisi says, "because now I can buy other foods with the proceeds of my vegetable sales. I can feed my family and can even sell some produce to pay for other food and household items like soap. I also pay for my grandchildren's school fees."

The design of keyhole gardens and their location near the home also make them an appropriate source of food for elderly or chronically ill people, and for families who care for orphans and other vulnerable children. With their raised beds and "keyhole" cutout, the gardens are particularly easy to tend.

"It's more helpful because I don't have to bend down," explains Maabisi. "Even the irrigation is easier."

Gardeners pour water left over from washing and bathing into a basket in the garden. This feature allows moisture to seep through the layers and reduces the need for families to collect water for irrigation, which is especially important during a drought.

Keyhole gardens can produce a harvest within 3 months of completion. A 2008 evaluation of their effect on households revealed that some families increased their monthly income by $50 during peak season by selling or bartering surplus produce.

For many people in Lesotho, where 43 percent of the population lives below the international poverty line of $1.25 per day, the additional income becomes a significant investment. The extra cash helps families cover costs, such as unexpected medical bills, or serves as initial capital to begin small business ventures.

CRS began implementing keyhole gardens throughout Lesotho in 2006. With our partners, we have built nearly 20,800 gardens for more than 100,000 people across Lesotho.

Highlighting the need to improve farming and access to safe and nutritious food in the country, the Lesotho government is promoting keyhole gardens.

In 2011, Catholic Relief Services Lesotho hosted representatives from 16 countries in Sub-Saharan Africa, plus Haiti and Afghanistan, to introduce the benefits of keyhole gardening and plan how to adapt that method to their local conditions.

The keyhole garden is also catching on in areas not served by CRS. "We've seen communities where we are not working spontaneously adopt the methodology," says Chandreyee Banerjee, CRS Lesotho country representative. "This a testament to their usefulness."

She adds that the gardens can have a tangible effect on other communities around the world that do not have access to safe and nutritious food.

August recess is a key moment to meet with your members of Congress while they are out of session... END_OF_DOCUMENT_TOKEN_TO_BE_REPLACED

Use this calendar for key dates to reflect and take action with your community to address climate... END_OF_DOCUMENT_TOKEN_TO_BE_REPLACED