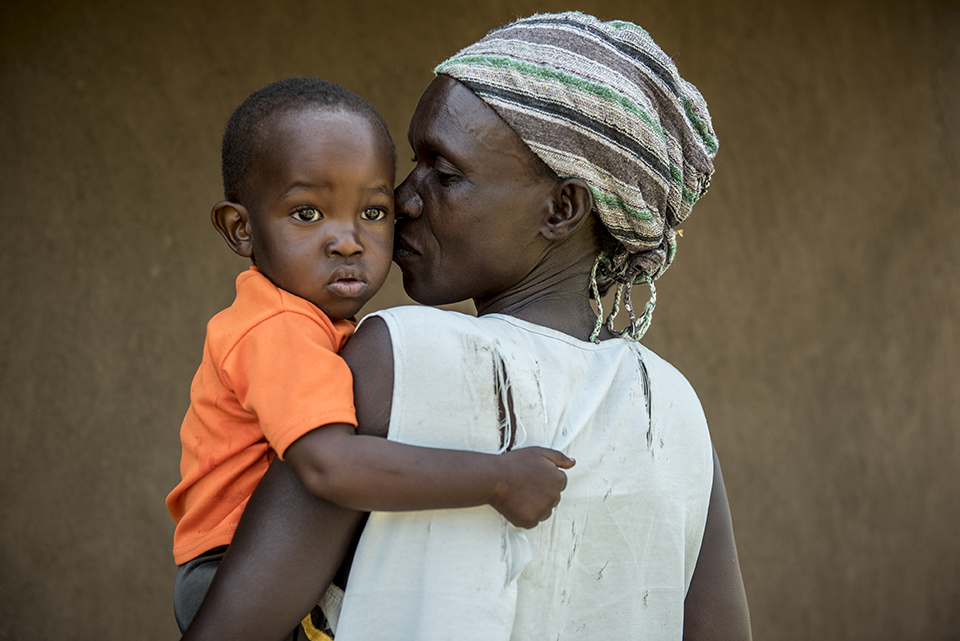 Rispa Awino kisses her grandson, Blevin. Rispa has been helping her daughter-in-law, Mercy, with Blevin since the THRIVE II project encouraged greater community support for mothers. Photo by Karen Kasmauski for CRS

Raising children is never easy. It’s the essence of the human condition—and of humankind’s struggles and joys in life. In tough times, women often rely on their mothers for support. But in Western Kenya, tradition dictates that a young wife moves in with her husband’s family and cuts ties with her own. Young mothers find themselves not only caring for children of their own, but also for their elderly in-laws. The daily grind of double responsibility can lead to depression and despair.

Catholic Relief Services and the Conrad N. Hilton Foundation are working to create a “culture of care” so mothers have the support they need to give children the best possible start in life. Since, in Western Kenya, in-laws often dictate how a mother will raise her child, the program encourages them to be part of the support network that buoys overworked mothers. Stress and depression can take their toll on the mother-child bond and have a spillover effect onto babies, resulting in their poor health and nutrition.

A few key components of the THRIVE II program encourage a slow shift in mentality and culture, so that women aren’t struggling on their own. The program brings mothers and caregivers together for twice-monthly sessions, where women learn about caring for small children, how to prepare nutritious meals and positive parenting. They also learn the importance of play, which helps spur robust physical and cognitive development in children’s earliest years. The first 1,000 days of a child’s life are a vital window of opportunity to set children on a solid path to healthy adulthood. 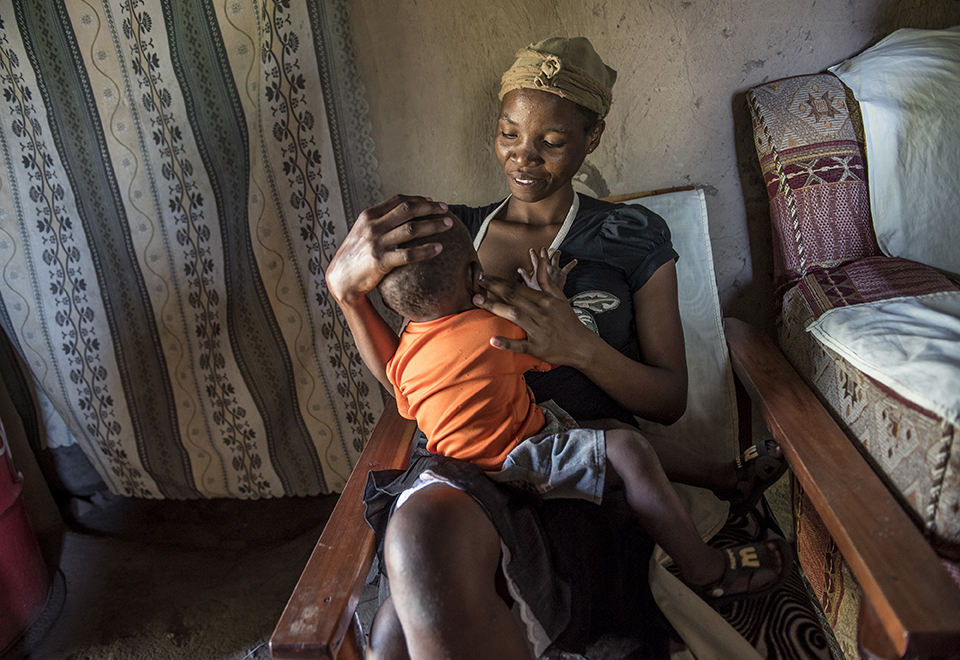 Mercy Awino Okoth plays with her son, Blevin. When Mercy had to stop attending THRIVE II training to prepare for her college entrance exams, her mother-in-law began attending in her place. Photo by Karen Kasmauski for CRS

Expanding the circle of support

In the initial stages of the project, staff noticed some of the young mothers would attend a few meetings and then stop.

“I only went to two meetings,” says Mercy Awino Okoth, mother to 1-year-old Blevin. “I couldn’t go because I was busy with appointments, trying to get into college to continue my studies.”

Mercy wasn't an isolated case. The program is designed to give women support on numerous levels—like meetings among mothers and caregivers, and home visits by lead mothers in the program and “neighbor women,” who ensure follow-up on lessons at each home. Even so, some women were still dropping out.  Something had to be done to boost attendance. The solution? “Influential group” meetings that fill what had become an obvious gap. After all, the mothers were essentially taking on added responsibility—obligations that could be shared rather than added to their already long lists.

“We see the women—our African women—and we thought, ‘How can we better support them,’” says Stephen Owino, a social worker CRS’ partner, Homa Hills Community Development Organization. “They do the cooking, the tidying up, they take the animals out to pasture, they fetch water, they take care of the crops and clean the clothes, and so having a baby? It’s a burden. For the man, being the breadwinner isn’t enough. So, we looked to not only the husbands, but also the mothers-in-law, the sisters-in-law and even the fathers-in-law, and we created influential group meetings.”

Through the care group meetings, it also came to light that some women only attended meetings once because their husbands didn’t want them to participate. There was a good deal of suspicion from many of the men in this strongly patriarchal culture.

“We’d hear that maybe a woman had been beaten by her husband for coming, or she just wouldn’t attend meetings. So we’d target that general geographic area with influential group meetings, inviting a cross-section of these husbands and in-laws who might be proving to be a sticking point, but without stigmatizing them,” says Fidelis Muthoni, project officer for the program in Kenya. The idea was to slowly create a trickle-down effect to encourage a change in behavior and mentality.

Now, it’s often the mother-in-law who attends neighborhood meetings when the mother cannot, and the entire extended family learns through her lessons. Babies can stay at home with their dads, grandpas, aunts or any number of family members happy to pitch in. Mothers can rest or focus on other chores at home.

The influential group meetings have been taking place for a little more than 1 year, extending the network of support for young mothers so they aren’t dragged down by the overburden of all their work. 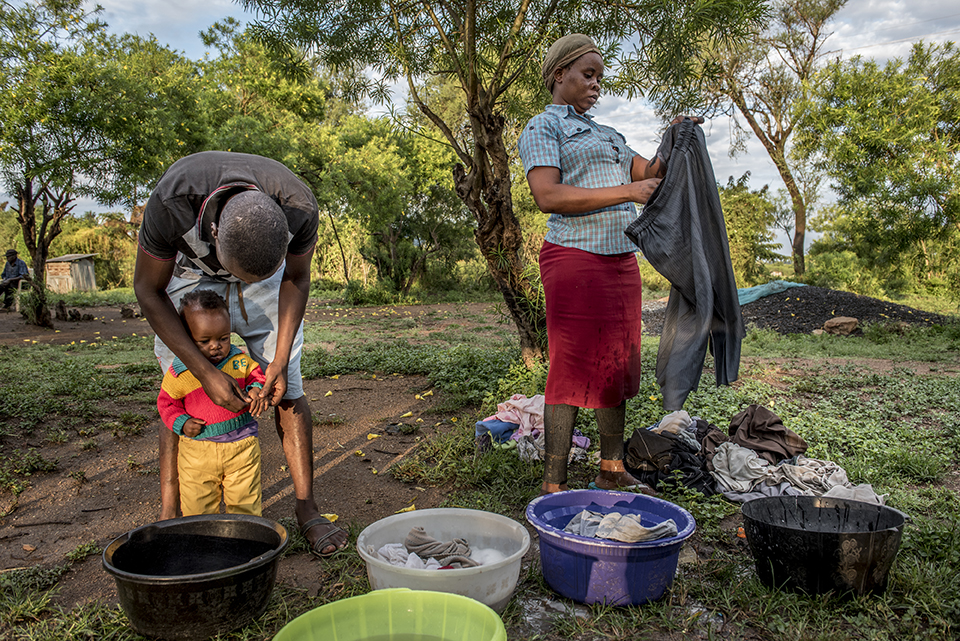 Mercy’s mother-in-law, Rispa Awino, has been attending the influential group meetings so Mercy can apply for college. Once Mercy has completed her studies, the family can focus on Boaz, her husband, so that he can finish his last year of high school. He was studying for a technical degree in mechanics, but had to drop out because his parents could no longer afford the fees. Boaz now drives a motorcycle taxi. The drivers compete, trying to make ends meet, since there are so few opportunities. Boaz rents his motorbike, so when he is lucky, he averages $3 a day in profit.

Rispa is bringing home her new knowledge for the rest of the family. She says she is learning about how to best support a mother and young child. She knows now to take Blevin for regular health check-ups, and the importance of exclusive breastfeeding for the first 6 months of his life. She has been making toys at home for him.

Rispa knows from experience how a tough life can knock a person down. After her husband, Henry, lost his job in the capital, Nairobi, in 1992, the family moved to his home village in Western Kenya. They’d been relatively well-off, but suddenly, that changed. In 1996, Rispa had a nervous breakdown and was sick for many years. Henry drained a huge chunk of his savings caring for her and the family while she was ill.

“We’d been living a better life, and I was depressed because suddenly we had no work, no money and no food,” Rispa says. “But now I’m OK.” She admits, however, that for a woman who feels isolated, “it does reach a point where you can have terrible thoughts.” 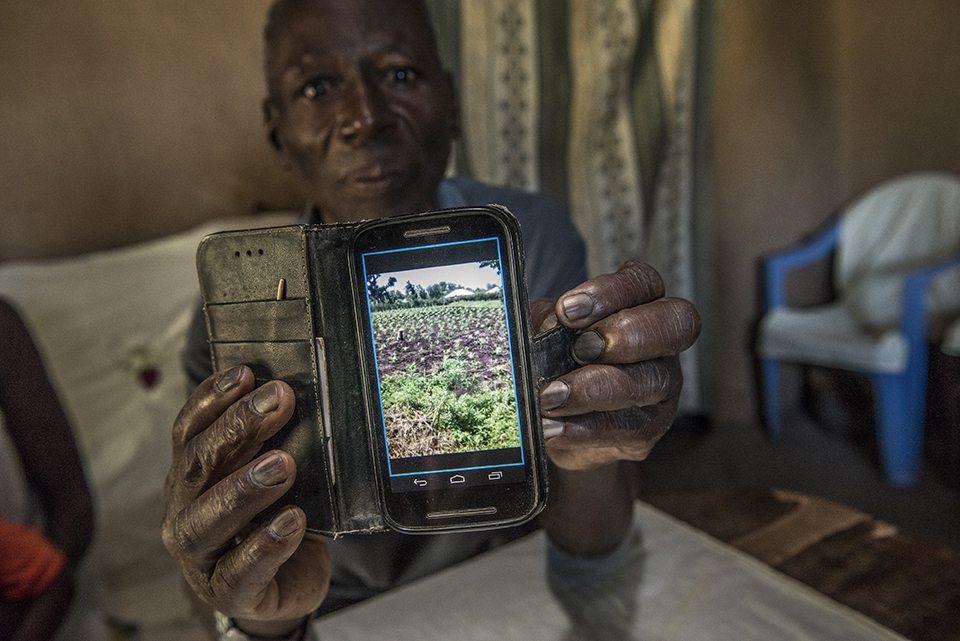 Henry shows the plot of land he has rented. He was clearly exhausted from weeding that morning, but remains the warmest of hosts. His son, Boaz, and Mercy met while participating in another CRS project that helped with school fees and other support. Photo by Karen Kasmauski for CRS

Today, Henry farms a small plot of land to earn his “daily bread.” Still, in the back of his mind, he carries the fear he could lose his wife again. Rispa says he’s a bit old-fashioned, and so the lessons she brings home are taken up more slowly by him. The fatigue shows on him—he listens with his eyes closed, his thumb and index finger massaging his tired eyes. Henry rents his land just like his son rents his motorbike, so it’s an investment he must pay back by reaping a good harvest of corn and beans. He’s been in the fields all morning, weeding.

A team approach to parenting

“Behavioral change takes time. It’s a slow process,” says Owino. “This is all new here. Men didn’t ever sing to their babies while they’re still inside the womb before, and there is still a lot of resistance to these new ideas.”

“But even if men aren’t doing it right away, or they aren’t doing it in front of others or laughing about it, they are probably starting at home, in private, with their wives,” he says. “Fundamentally, husbands and wives are talking together now as partners. They are a team, and that makes all the difference. They aren’t struggling through the toughest of circumstances all on their own.”

The influential group meetings acknowledge and harness the very strong influence of tradition and culture on young women, who are often still impressionable. By engaging with their new extended families, that helped them share their burdens and gave them space to focus on themselves. Family tradition also holds enormous sway over young men, so when grandfathers begin taking care of the children, young fathers do too.

August recess is a key moment to meet with your members of Congress while they are out of session... END_OF_DOCUMENT_TOKEN_TO_BE_REPLACED

Use this calendar for key dates to reflect and take action with your community to address climate... END_OF_DOCUMENT_TOKEN_TO_BE_REPLACED